Gambling as a striker brought Kerry Dixon stacks of goals, a trip to the World Cup, plenty of money and legend status at Chelsea.

But an addiction to gambling away from the penalty box cost the former England striker much more than just financial pain.

The 55-year-old frittered away "thousands and thousands" of pounds, bringing bankruptcy, the loss of three houses, a breakdown in his marriage, a journey into drugs and the lowest point - four months in jail for assault.

"Gambling was my downfall but I have done that all my life," Chelsea's third highest goalscorer of all time told BBC Sport. "It's been an addiction and I don't think it can ever be completely controlled or contained.

"I believe it's in my DNA. It is something in me I would argue that maybe made me the footballer I was.

"It was the drive, the will to win, the need to score goals. When I gamble, it's wanting to win because of the buzz I get from it."

The only way is up

A year after leaving prison following his conviction for punching and kicking a man in a pub, Dixon is "still very much on the floor".

"But the only way is up and it's going to be up," he quickly adds when reflecting on his new life.

The climb seems daunting. His punditry work has dried up for now, but he's paying the bills by working as a heating engineer's assistant - pipe fitting, boiler work and "various other bits and bobs". "However you describe it, I am an assistant," he explains.

And he hopes the release of his autobiography will be a cathartic process and help him draw a line under the bad times, and get him back working in football. 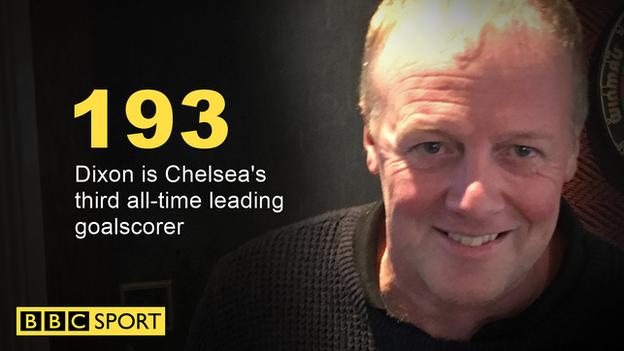 He has plenty of support. The Chelsea fans have been "magnificent" and he has been told the door is not shut on him resuming his matchday hospitality work at Chelsea at some point.

The Professional Footballers' Association have also been a huge help, but it is an ongoing battle.

Bobby Barnes, the PFA's deputy chief executive, told BBC Sport: "Kerry is an object lesson in how a player can fall from grace.

"But he has also displayed tremendous strength of character because the hardest thing sometimes is to take that step and admit you need help and you have a problem.

"It took a little while, but Kerry has very much embraced what we have been trying to do to help. We have done as much as we possibly can, and continue to do as much as we can, to support him.

"I'm in regular contact with Kerry and Chelsea have been very supportive, in particular chairman Bruce Buck. Bruce and I are in regular dialogue to see what we can do to assist."

The game was good to Dixon. On the pitch there were lots of goals, but the gambling was just as frequent. He scored 193 times for Chelsea, the club he spent nine years with from 1983.

Having been rejected by Tottenham and Luton as a youngster, Dixon was soon back in the Football League and had a productive three seasons with Reading.

But it was the move to the Stamford Bridge club in the summer of 1983 that brought the best years of his career. Dixon scored twice on his debut and ended as top scorer in the Division Two Championship-winning campaign of 1983-84.

The hat-trick of Golden Boots came the following season, sharing the trophy with Gary Lineker. And a pre-Mexico 86 World Cup acclimatisation trip could hardly have gone better at the end of his first season in the top flight, scoring two goals on his full debut in a 3-0 win against West Germany.

"As a debut it was one of the great days of my life," said Dixon. "Playing for England was every kid's dream. On the Panini strikers it was then Kerry Dixon, Chelsea and England.

"To score two against the Germans and beat them was just incredible."

But breaking into manager Bobby Robson's starting line-up was a huge ask. Dixon rattles off a long list of names who won England caps when he was at his peak.

"I played in an era where there was Paul Mariner, Tony Woodcock, Garry Birtles, Ian Wright, Mick Harford, Brian Stein, Paul Walsh, Clive Allen, Tony Cottee, Gary Lineker, Peter Beardsley, Mark Hateley, Steve Bull, John Fashanu and Trevor Francis. But I scored so many goals during that time that he couldn't ignore me.

"Now there is a serious serious dearth of strikers. There's Harry Kane and Jamie Vardy, then you are looking at Danny Welbeck, Marcus Rashford and Daniel Sturridge. And Wayne Rooney, but is he a striker now? The competition is not so great."

Dixon only played six minutes at the World Cup, appearing as a substitute against Poland. And turbulent times followed, both for Chelsea and Dixon.

A relegation - after the break-up "of the best Chelsea team I ever played in" - and another Division Two winning-season, were once again part of the landscape. So, almost inevitably, was the gambling.

"As a player, everyone had their thing when they finished training - drinking, going to the golf course, the snooker hall or whatever," said Dixon. "I went to the betting shop.

"It's what I loved and what I did. It got totally out of control. Betting accounts and shouting numbers down the phone - it was crazy.

"You can have a game of pool for £1 but I was ending up betting a grand or more on the dogs and horses. I ended up in trouble, thinking, 'What am I doing?'"

Dixon stopped on various occasions but not for long. At one point he gambled away £130,000 in less than a week - a serious amount of money now, let alone in the 1980s. He had to be bailed out by chairman Ken Bates, who did a deal with the bookie involved.

It is under control now - partly because he simply does not have the option. But the way Dixon talks about gambling in the present tense is telling.

"I am confident the days of heavy gambling for me have well gone, but I don't know for certain," he said. "An alcoholic says they will never have another drink but they don't actually know."

He left Chelsea in 1992, and did so very reluctantly because he was closing in on the club's all-time leading goalscorer at the time, Bobby Tambling.

But he was told he would be playing in the reserves and he desperately needed the money to pay off more debts.

"One of my biggest regrets is not getting the record," he said. "I could have put that record out of sight so Frank Lampard couldn't have beaten it.

"But I didn't want to play in the reserves - that's just not me. And I had obligations - and debts - and the bonuses would have dropped off."

After a miserable time at Southampton came a rewarding near three-year spell at Luton Town - which included facing Chelsea in an FA Cup semi-final at Wembley.

"That was one of the greatest days of my life in football," recalled Dixon. "We lost 2-0, but afterwards it seemed the whole ground was singing my name."

He also played for Millwall, Watford and Doncaster Rovers as a player-manager, before eventually retiring in his mid-40s. Again, partly because of financial necessity, but partly because he simply loved playing.

Post-football, the problems moved beyond the gambling, into drugs and eventually to jail.

"I did the crime and paid the penalty," said Dixon. "I am sad it happened but I am not one to live in the past - I will move on and am determined not to let it happen again.

"I haven't become a new person but it has given me a new idea on what can happen and where life can take you.

"Jail is a very lonely place; it gives you a lot of time to reflect on everything, how you will be remembered, how many years you have left and what you will do with them. I have kids, a mother and father and I have responsibility to them.

"It's there on my CV and I cannot change that and I am not proud of it - I want people to remember me for being a good bloke, not an ex-footballer who has gone off the rails and gone to prison."

'Look at me and learn'

Barnes said the PFA are well aware of the issues facing players after their career ends.

"We call it the transition period," said Barnes. "When you think about it, footballers were very ill-prepared. There is a lot of work now being done, particularly in terms of our education programmes, to try to ensure that transition from being a player, to being able to carry on with the rest of your life and do something meaningful."

"Look what can happen," he said. "Look at some old pros who have done their dough and are penniless - me being one of them. And get help if you need it."