The way Tottenham beat Premier League leaders Manchester City on Sunday was a huge statement of intent by boss Mauricio Pochettino and his players.

It was not just the result that was impressive, it was how they got their 2-0 win. Right from the start, the intensity of their play was frightening, and they carried out Pochettino's game plan to perfection.

I cannot say I was surprised to see how good Spurs were, though.

As I said in my BBC column before the game, I already had them as being title contenders - this was a performance that just gave me more proof that they have got what it takes.

One of the reasons I predicted Tottenham to beat City was because of the timing of the fixture.

Spurs are notoriously slow starters to the season under Pochettino, because he works them so hard early in the campaign to get their fitness levels up.

They always seem to click a couple of months in, however, when that work starts to pay off and that was the case against City.

Seven outfield players that started against City were starting their third game in eight days, including a long midweek trip to Moscow, but they looked fresh because they have entered the phase of the season where they are up to speed.

Tottenham covered more distance on Sunday than they had in any other Premier League game this campaign, and made more sprints than any other top-flight team in 2016-17.

You could tell from the tempo Spurs set from the off that they were going to make it a tough afternoon for City, and another part of the reason they could do that was down to the crowd.

The atmosphere at White Hart Lane was incredible, and it had exactly the effect I would expect.

I have played there when the ground has been buzzing like that, and you feel unstoppable. The fans are so close to the pitch and they help you so much - from some of the post-match tweets I've seen from Spurs players, it made a big difference against City too.

Wanyama a warrior in midfield

Dele Alli said afterwards that Tottenham's plan was to get in City's faces to stop them playing, and they definitely did that. It was the right plan too.

I don't know whether the Spurs players saw Celtic do the same to City in the Champions League on Wednesday, but I watched that game and thought it was the way for Tottenham to go.

Tottenham pressed City not only with intensity, but from the right angles. They forced them into corners to make mistakes, and always had players backing each other up to make sure they won the ball back.

As fit, strong and fast as Spurs are, they still got to a stage in the game where they could not keep it up and City started to find a way through.

We already know the Tottenham back four is hard to break down, because of their record over the last couple of seasons.

But another sign of how their team is developing was how well summer signing Victor Wanyama played against City.

In his first couple of games for Spurs, I was not convinced by him. I thought he was decent back-up for the existing central midfielders, Eric Dier and Mousa Dembele, nothing more.

Against City, he was immense, and not just for his tackling or the amount of ground he covered.

He was also composed on the ball in the areas where Spurs needed it, and disciplined too. It was the performance Tottenham fans have been waiting for.

Wanyama got a yellow card after half an hour and with Dier on the bench, I would have been tempted to take him off in the second half.

But Pochettino obviously had a conversation with Wanyama, who was sent off three times for Southampton last season, and trusted him enough to keep him on. In itself, that tells you how much he believes in him as a player. 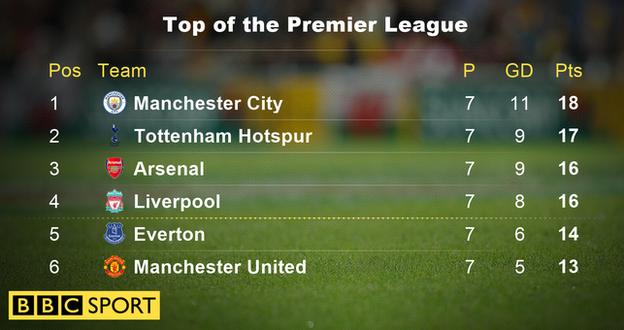 Dembele has only played 74 minutes of Premier League football this season, and he would usually be a huge miss to any team. It is the same for Harry Kane, who is currently sidelined too.

But Spurs showed they have got the squad to cope without them against City. They are only a point behind them at the top of the table now, and after a performance like that, they will believe they belong there.