Derby County manager Nigel Pearson has been suspended by the club and will not be in charge of the team for Tuesday's Championship match at Cardiff City.

BBC Radio Derby reports the decision was taken pending a club investigation into Pearson's behaviour and he is not expected to return as boss.

The Rams have not won in six league matches and are third from bottom, having scored just three goals.

Assistant manager Chris Powell will take control of the side in Wales.

A statement on Derby's website read: "Nigel Pearson will not be carrying out his duties at Tuesday's game at the request of the club.

"The club will make no further comment at this time."

Former Leicester City manager Pearson only took over in the summer - an appointment chairman Mel Morris described as "perfect" - but Derby have won just once from nine Championship matches so far this season.

Morris told the players of the decision at 16:30 BST, just over three hours before the scheduled kick-off at the Cardiff City Stadium. 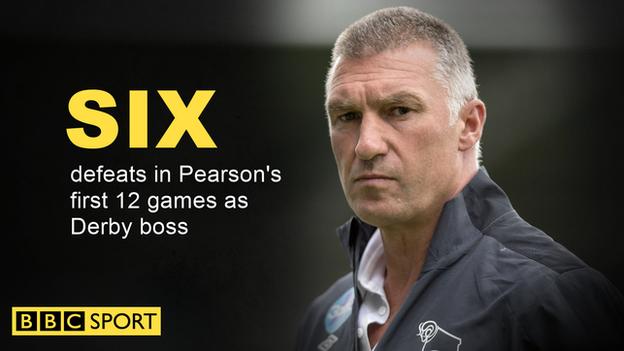 "It is my understanding that Pearson has been suspended pending a club investigation into his behaviour.

"What exactly that behaviour is we are not sure - but I would be amazed if he manages Derby County again.

"I was with Derby's owner and chairman Morris on Friday when he told me here emphatically that Pearson was the man for the job and he told me repeatedly that he would be given time to change things at Derby.

"He made it clear Pearson was his man.

"The situation has changed very quickly indeed over the weekend. It appears something drastic has happened over the past 48 hours or so.

"That included that pretty horrendous defeat at home to Blackburn on Saturday, when Derby took the lead but then wilted and threw it away in the second half."