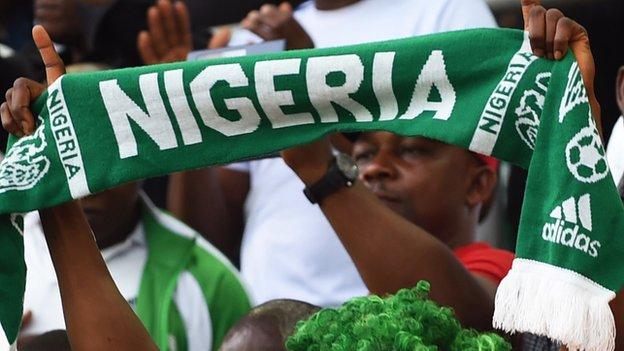 Nigeria's players understand they will have to wait to be paid outstanding bonuses as the football federation's financial issues continue.

The Nigeria Football Federation (NFF) wants to avoid a dispute ahead of their 2018 World Cup qualifier against Zambia on 9 October.

The NFF insists payments will be made when government releases its funding.

"We understand the financial situation affecting the country," one player told BBC Sport, but insisted on anonymity.

"We haven't been paid our bonuses from March but we just hope that they will sort it out as promised.

"It's only important for everyone to focus on the game against Zambia and not the money problems affecting the federation."

The NFF, who receive direct funding from government, are in dire straits as Nigeria last month slipped into recession for the first time in more than a decade.

NFF president Amaju Pinnick had taken to Youtube to explain that the issue of unpaid wages is a very unfortunate piece of timing.

"I believe that if you work you should earn your dues, but the current economic situation has put us in a very precarious situation in terms of funding," he said.

"It's not just Nigeria but a global recession and it's very difficult to fulfil all our financial obligations because the government is struggling."

Pay rows have often surrounded Nigerian teams, with coaches not paid regularly, while players have boycotted training during important qualifiers or at major tournaments over unpaid bonus.

The poor financial position of the NFF has already forced the country to cut their backroom staff and slashed the salaries and allowances of the various national team coaches, excluding new Super Eagles manager Gernot Rohr.