Things seem to be going from bad to worse for West Ham, who looked all over the place at the back as they lost 3-0 at home to Southampton.

But when I analyse how a game has been won and lost for MOTD2, I always look at it from the positive side first and, for all of West Ham's problems, Saints put in an excellent attacking performance.

This is how the game was won.

Bertrand and Cedric both superb at getting forward

Southampton's full-backs, Ryan Bertrand and Cedric Soares, held the key. Both were superb at getting forward - Bertrand in particular in the first half, and Cedric after the break.

Bertrand was causing problems for West Ham's wide midfielders - Michail Antonio and, occasionally, Dimitri Payet, who switched sides from time to time - through his willingness to run beyond them and go at Hammers right-back Havard Nordtveit.

That gave Saints a great attacking outlet, and it was Bertrand who created their opening goal with a brilliant overlapping run that saw him get in behind Nordtveit and pull the ball back for Charlie Austin to score from a great cross.

Austin's goal came from his only shot, which tells you a lot about the role he was playing for his team. 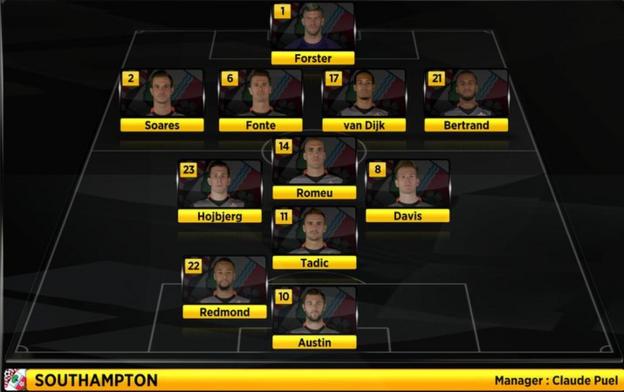 Austin did a lot of running without getting much of the ball in open play - he had the fewest touches of any outfield player from either starting XI.

But, by doing a lot of selfless work, he stretched play, occupied West Ham centre-halves Angelo Ogbonna and Winston Reid, and freed up space for Nathan Redmond and Dusan Tadic.

Behind that trio, Southampton were disciplined in the middle of the pitch and solid at the back, with Oriol Romeu sitting in front of their centre-halves, Virgil van Dijk and Jose Fonte.

Van Dijk made 16 clearances, as many as the entire West Ham back four between them, which shows how dependable he was.

The Netherlands international, who cost £13m when he joined from Celtic just over 12 months ago, looks like a superb signing, especially because of his partnership with Fonte, who has had a few different centre-half partners in his six and a half years at Saints, but is a reassuring presence in their back four.

Hammers have problems from front to back 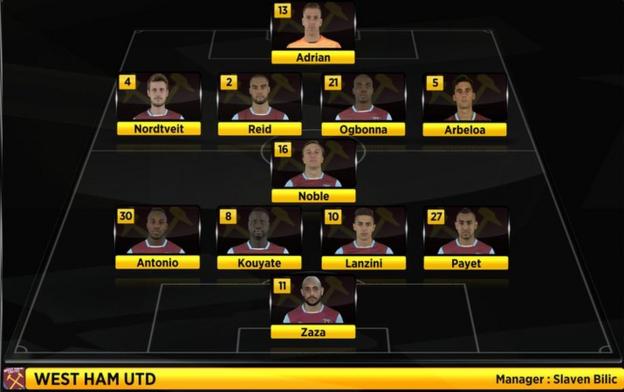 I think we are starting to see what this Southampton team is made of under Claude Puel, but we are still waiting for West Ham to show any signs of the sort of form they showed under Slaven Bilic last season.

The manner of this defeat was typical of the performances we have seen from the Hammers in 2016-17 - they sat off, did not take the game to their opponents, failed to pose much of a threat and struggled defensively.

You can trace their problems from front to back, starting with Simone Zaza's inability to stretch Southampton's defence in the manner Austin did at the other end.

I saw quite a lot of Zaza for Juventus last season, and Sassuolo before that, and although he works hard he never looks like he is going to hurt teams by getting in behind them.

The knock-on effect of him working in front of the two centre-halves was there was no room for Manuel Lanzini or Payet to find little pockets of space.

Payet is not one for tracking back anyway, and although Antonio is a willing worker down the flank he is guilty of switching off sometimes - as happened against Saints. Both were poor at tracking the Southampton full-backs.

That left Mark Noble and Cheikhou Kouyate with too much work to cover, and the West Ham defence was a little bit exposed. As a back four, they did not look comfortable.

West Ham need a win more than a good performance

West Ham's approach from the start was more 'let's not be beaten' than 'let's go and win the game'. They seemed too happy trying to contain Southampton.

In my mind, from the way they set up, they should have been saying this was the game where they made a real statement at their new home, because they have not managed it yet.

I also watched their only Premier League win at the London Stadium, against Bournemouth last month, but that was not a performance to get them up and running. It was more a case they got away with it that day, something they have not managed again in their four league defeats since.

Confidence - or lack of it - is a huge factor for them at the moment when they play at home because they have not managed a good performance there yet.

That is why they are coming out and looking a bit intimidated in home games at the moment. There does not seem much forward movement, and there is certainly no penetration.

I still think Bilic will get it right, and also that his squad is good enough to be much higher up the table, but what he needs at the moment is a positive result anywhere as much as a stand-out performance at home.

From experience, I know that all the negatives that come with a bad run like this one vanish when you get a win, and it does not matter how.

What West Ham need more than anything is a victory, even a scrappy one, to give everyone at the club a lift. The longer this run continues, the harder it will get.