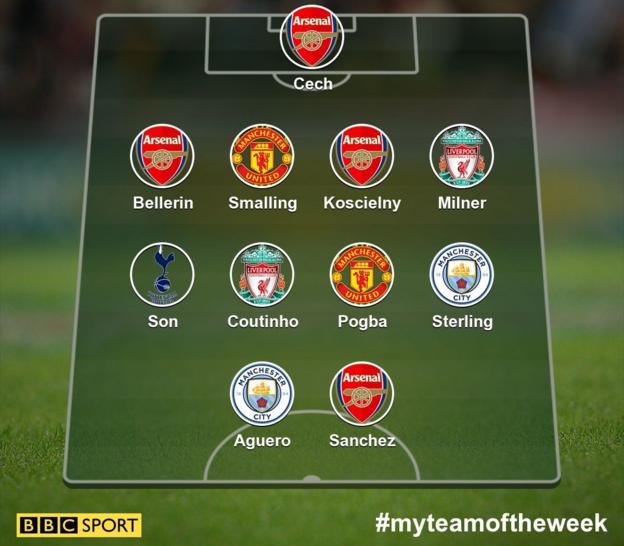 Manchester City made it six wins out of six with victory at Swansea, while neighbours Manchester United hammered reigning champions Leicester in an exciting weekend in the Premier League.

Arguably the performance of the weekend came at Emirates Stadium, where Arsenal sealed their first league win over Chelsea since October 2011.

Liverpool and Tottenham won again but there was more woe for David Moyes and Slaven Bilic as Sunderland threw away a 2-0 lead to lose 3-2 at home against Crystal Palace, and West Ham went down 3-0 at home to Southampton on Sunday.

There was a last-minute goal at Stoke as West Brom snatched a 1-1 draw, while Bournemouth inflicted a first league defeat of the season on Everton.

Last season, far too much emphasis was placed on Cech's arrival at the Emirates. There was an assumption that the title was a formality in what was otherwise thought to be a championship-winning team. A year later and, in an Arsenal side whose defence was unflappable against Chelsea, Cech can still produce the big saves when called upon.

I've only ever seen one goalkeeper whose save turned a season and that was Peter Shilton in Brian Clough's 1977-78 Nottingham Forest title-winning team. His point-blank save from Coventry's Mick Ferguson was a turning point and was regarded as the moment that delivered Forest the championship.

Cech is very capable of producing something similar which is just as well if you are serious about winning the title.

I knew Bellerin was quick but not that quick. Against Chelsea, the only real mistake Gunners centre-back Laurent Koscielny made all game was to allow Pedro a free run at Arsenal's goal. However, that was before Bellerin took evasive action and absolutely destroyed his fellow Spaniard for pace.

What really impresses me about Bellerin, apart from being lightning quick, is the way he attempts to link the play with players like Alexis Sanchez and use the forward almost as a wall to get himself into the opposition penalty area. What a cheek. It really should be the other way round.

There's something rather obtuse about a right-footed midfield player playing left-back. However, Milner seems determined to make it work for Liverpool. The question is for how long?

The position does not, of course, affect a player's ability to score penalties with your right foot - you just have to be on the pitch to do that and have a very cool head. It would appear Milner is making the most of both.

If you are a centre-back and about to face Diego Costa, you are perfectly entitled to wear a gum-shield and place plenty of Vaseline over the eyebrows. To Koscielny's credit, he refused to apply either and relied on his sheer tactical ability to outplay Costa.

In the past, Arsenal have employed more combative defenders like Gabriel to out-battle the Spaniard and the contest has invariably ended in tears. Koscielny offers brain instead of brawn and it worked perfectly.

It was good to see Smalling attacking set-pieces in the opposition penalty area again. Last week he didn't get any luck at all against a rampant Watford but his perseverance against Leicester certainly paid off. To out-jump Robert Huth and Christian Fuchs takes some doing and it produced Smalling's first goal of the season.

Fortunately for United, the goal also came early enough to alleviate mounting pressure created by Watford's surprise victory over United last week. Managers can only do so much to take the pressure off players, perceived or otherwise. The rest, players have to deal with themselves.

Four goals in two matches says all you need to know about Son and the way he is playing at the moment. His two goals against Stoke were pretty amazing and these two against Middlesbrough were just as good.

Eyebrows were raised by some Spurs fans when Nacer Chadli was sold to West Brom and Son remained at the club. No-one is raising eyebrows anymore.

It's about time we saw a little bit of what the fuss was all about. Pogba has cost Manchester United an awful lot of money but it has been Wayne Rooney that has been taking all the flak for United's ordinary start to the season. So, in the absence of Rooney, I was particularly pleased to see the Frenchman take control of the game against Leicester and show us what he's got.

His chip for Zlatan Ibrahimovic to volley in the first half wasn't bad and his shot that had Ron-Robert Zieler scrambling across his goal to make the save was even better. We then saw a wonderful one-two with Juan Mata to set up his finish before Pogba crowned his performance with his first goal for United with a superb header to wrap the game up completely. Now that's more like it.

This guy is my favourite Premier League player at the moment and a real pleasure to watch. Coutinho set up Liverpool's first two goals and then scored an absolute beauty.

I am really interested to know how Jurgen Klopp intends to keep the Brazilian fresh for Liverpool's domestic campaign. Coutinho will have to regularly fly halfway around the world to keep his international commitments and should he ever pick up a long-term injury, Liverpool can kiss goodbye to a top-four place. It's enough to keep a manager awake at night.

This lad keeps on getting better every time I see him. Last season, Sterling couldn't hit a barn door but that was before Pep Guardiola got hold of him and shook the dust of doubt from his heels.

Sterling's superbly taken goal against a desperately unlucky Swansea epitomised the player's rapid development under Guardiola. This time last season, Sterling was scuffing and slicing shots all over the place. Now he is showing remarkable composure he has never displayed before.

What a pity 'sour puss' referee Neil Swarbrick booked Sterling for celebrating his goal with a small contingent of travelling City fans. Does Swarbrick not realise that it's moments like this that motivate fans to travel across the country to see their heroes?

The sheer audacity of the penalty taker was enough to tell you that Aguero had been clearly unaffected by his three-match domestic suspension.

The Argentine had already put his side ahead with a turn that left Swansea's Jordi Amat treading water. Then his penalty chip was so brilliantly executed it sent Lukasz Fabianski so far in the wrong direction he almost had to pay to get back in the ground.

At the risk of sounding treacherous to my former club Tottenham, if Arsenal can manage to keep Sanchez, Mesut Ozil and Santi Cazorla on the field and at the same time, Arsenal must be in with a chance of winning the title.

Sanchez is the most important member of the trio as far as I am concerned. Keep Sanchez fit and present him with sufficient goalscoring opportunities and the Chile international is very capable of bringing Arsenal the trophy that has eluded Arsene Wenger for some considerable time. The thought is enough to give Spurs fans nightmares.