Charlie Sheringham was 11 years old when he witnessed his dad score in the 1999 FA Cup final as Manchester United took a giant stride towards the Treble.

Sir Alex Ferguson's side had already won the Premier League when goals by substitute Teddy Sheringham and Paul Scholes secured victory over Newcastle United at Wembley.

On Saturday, the roles are set to be reversed with former England striker Teddy, 50, likely to be at Stonebridge Road to see his son, 28, in action for Ebbsfleet United against Havant and Waterlooville, one of 40 FA Cup third qualifying round ties taking place this weekend.

"It was amazing to see my dad score in the FA Cup final, especially as he had only just come on," Sheringham Jr told BBC Sport. "But if I'm being honest, it was a bit of a blur. I was very young and it was a hectic few days."

Four days after Wembley, Sheringham was at the Nou Camp to see his dad again come off the bench to score against Bayern Munich as United came from behind to win the Champions League final in dramatic fashion.

"My dad always told me that FA Cup final day used to be like a Bank Holiday and everything would come to a stop," added Sheringham. "At Wembley, I remember being sat with all the other players' families.

Charlie Sheringham, also a striker, is in his third season with Ebbsfleet, who three and a half years ago were broke and going out of business.

"Things were so bad that some of the older fans were turning up at the ground with cameras wanting to take one last picture before it was gone," said Peter Varney, vice chairman of the Kent club, who play in the the sixth-tier National League South.

In 2008, Ebbsfleet were bought by community fan website MyFootballClub whose members paid £35 for the privilege of owning a say in a club. However, membership, which originally stood at over 27,000, fell to about 1,000.

They were issued with a winding-up order for unpaid rent before being rescued at the 11th hour in 2013 by Kuwaiti investor Dr Abdulla al Humaidi, the chairman of KEH Sports Limited which has healthcare and property interests.

"He was looking to build a football club in England. He loves football and wanted to get involved and understand what it's all about," added Varney, the former Charlton Athletic chief executive.

Work on a new £5m stand, which will feature a community centre and club shop, is well under way, while striker Aaron McLean, who played for Hull City in the Premier League three years ago, is part of manager Daryl McMahon's squad.

Al Humaidi's ultimate aim is to see Ebbsfleet United win two promotions to the Football League. Despite being based in Kuwait, he is a regular visitor to Stonebridge Road on match days.

"When he's in London, he travels to games on the train. He's not interested in turning up in a chauffeur-driven car," added Varney. "Some owners have to cower at home games, but he's treated like a hero."

'Blindfolded Beckham scored past me'

Of the 366 teams that entered this season's FA Cup at the extra preliminary round stage, nine have battled through four rounds to make it to within 180 minutes of the first round proper - including Brimscombe and Thrupp.

None of the players at the Gloucestershire ninth-tier village club get paid yet they are banking on a former England blind football team goalkeeper who once shared a pitch with David Beckham to get past Weymouth on Saturday.

Lewis Skyers represented his country more than 30 times - the keeper is the only fully sighted member of the blind team - and featured for ParalympicsGB at the 2012 Games in London. 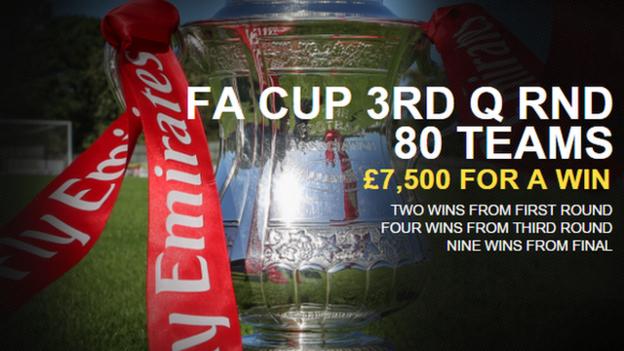 "He wanted to experience what it was like to play blind football and was very keen to get involved in a training session" said former Worcester City keeper Skyers.

"David was very enthusiastic about it. He even scored a penalty against me while he was wearing a blindfold."

Before this season the Lilywhites had not advanced past the preliminary round - but this is now their fifth tie in what is a club-record run in the competition.

"We get between 60 and 80 people watching us on an average Saturday," said boss Sam Prior, who works for his family's carpet fitting business. "We've got zero budget so to have got through four rounds and earned almost £11,000 in prize money is ridiculous.

"If we end up driving to a game then we'll put five in one car and pay a bit of petrol money to the driver.

"Weymouth is our FA Cup semi-final. If we make it to the fourth qualifying round that will be our final. Anything beyond that is dreamland."

Not many players at this early stage can claim to have appeared in an FA Cup semi-final at Wembley.

Stockport County striker Kayode Odejayi did just that - and managed to secure the shirts of John Terry and John Arne Riise along the way.

Striker Odejayi, 34, was part of the Barnsley side who in 2008 shocked Rafael Benitez's Liverpool at Anfield and Avram Grant's Chelsea at Oakwell before losing to Cardiff in the semi-finals in front of 82,752.

Odejayi was carried on the shoulders of delirious Barnsley fans at the final whistle against Chelsea after his header secured the club's first FA Cup semi-final since 1912.

"I could have gone out afterwards and celebrated like crazy, but the truth is I had a chilled night in with the family who had come up from London to watch the match," recalled Odejayi.

"I did manage to get John Terry's shirt. He was gracious in defeat and he signed it too. The round before I had come on as a substitute at Liverpool and managed to get Riise's shirt."