For a team with some of the best players in Europe, Manchester United's performance in their 3-1 defeat by Watford was nowhere near the level I would expect.

United were sloppy and they did the sort of simple things badly - like losing runners, or kicking 30-yard passes straight out of play - that are the basics for top-quality teams.

Watford deserve some credit, of course, for breaking the game up and playing well themselves.

But United were just not at it for long periods at Vicarage Road, and part of their problem was that they did not really look like they had a set gameplan when they came forward. 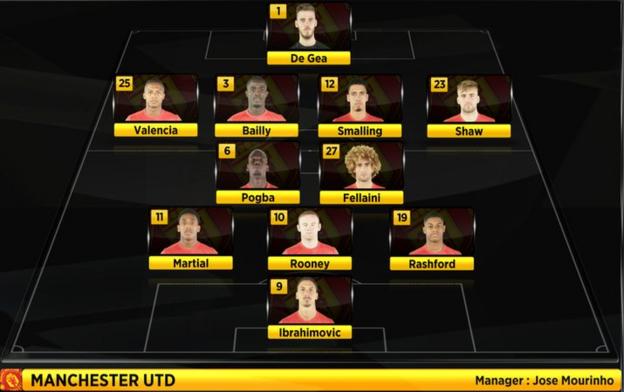 United lacked width because Marcus Rashford, Anthony Martial and Ashley Young - who replaced Martial after 38 minutes - were all coming inside.

That is not a bad thing if the opposition are leaving space there, but Watford weren't. They were clogging up the middle of the pitch, and leaving the wide areas free.

The Hornets were playing in a kind of imbalanced 4-4-2 when they had the ball that became a 4-5-1 when United were in possession. 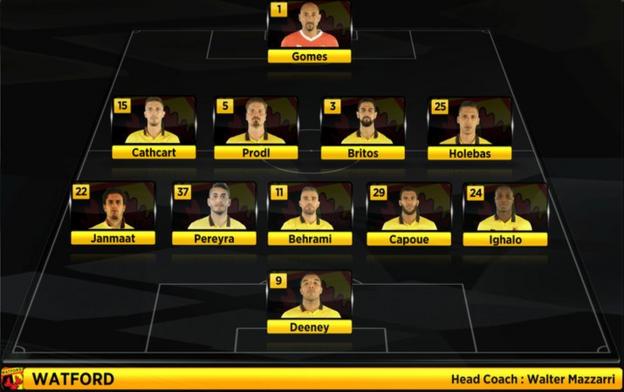 Odion Ighalo would end up out on the left, although he was not tracking back so Antonio Valencia had lots of space.

More often than not, though, Valencia did not have any team-mates in front of him because, say, Rashford had gone inside too early.

Valencia was usually picking up the ball and running from deep so it meant that the Watford left-back, Jose Holebas, had time to get over and cover.

If Rashford was out there, United would have had a two-versus-one situation out on the right because Ighalo had not tracked back. Instead Valencia was looking up and seeing that everyone had moved inside.

United really needed their wide-men to stay high and wide because by cutting in so early they were no help to their full-backs, or anyone else.

It meant there was less space in the middle for Rooney or Pogba, who had nowhere to go, and it became easy for Watford to defend against because United's attackers were all occupying the same areas.

Nobody in midfield to play a killer ball

As the game wore on and Watford tired, they gave United some good possession in midfield. But, when you have that, you need someone who can open up a team.

In recent years United have always had that player - Michael Carrick, Paul Scholes or Ryan Giggs when he played centrally - who can do it, even in a tight game.

When I played in midfield against United I always thought that if I sat off Scholes, he is going to hurt us. You give him any sort of time and space and, bang, he has seen the pass and played the killer ball.

With a big striker like Zlatan Ibrahimovic and runners like Rashford, this United side have got plenty of targets for that kind of playmaker, but against Watford they did not have a midfielder with the required passing range.

Pogba has got many strengths but he is not so much of a ball player. He is better when he is running on to things and going at people.

His partner at Vicarage Road was Marouane Fellaini, who is more of a safety-first player. He has got his attributes, but he is not someone who will split your defence open.

Fellaini is quite disciplined and does not go wandering too much, which I think Mourinho likes. He helps his centre-halves and, as we saw against Watford, he keeps the ball well.

But do you need more when you play for United? In games like this, yes. Although they had lots of variation in their forward players, they lacked someone who could make things happen and instigate attacks.

Carrick was on the bench against Watford and, with what he can offer and the way the game was going, I was amazed he did not get on the pitch at any point.

No need to panic with so much quality

Mourinho will be massively disappointed to have lost three games on the spin - it is just not something he does, especially with a performance like that one.

But it should not be panic stations at Old Trafford, because there is plenty of quality and talent in their squad, and lots of options in every department.

Mourinho just needs to find a better balance with his team in games like this where they have most of the possession, and make sure they are more creative, because they were a bit predictable against the Hornets.

Like any manager who goes to a new club, Mourinho has brought in his own players but he also has to look at the ones who were already there, and work out which ones suit the way he wants to play. That is going to take time.

United's bad run is made that little bit worse by how well Pep Guardiola's Manchester City are doing at the moment, but Guardiola and Mourinho are both still finding out about their players.

It just so happens that City have hit the ground running while United have had this little wobble, but it is a long season and everyone is going to have a bad spell at some point - even City.