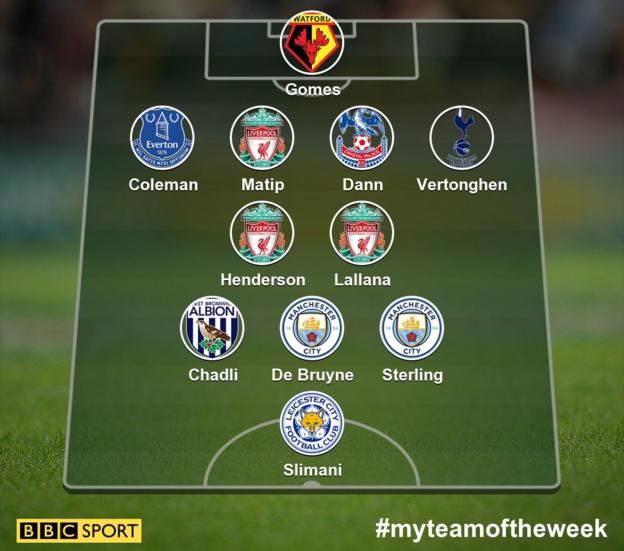 Manchester City continue to sweep all before them, making it five league wins out of five with their victory against Bournemouth.

Liverpool looked good beating Chelsea, while Manchester United suffered a second top-flight defeat on the bounce, away at Watford.

Arsenal and Tottenham also won but the bottom three of West Ham, Stoke and Sunderland lost again and you can see the top performers from this round of Premier League fixtures in my team of the week, above.

The save from Zlatan Ibrahimovic's header was superb, but the way Heurelho Gomes refused to be intimidated, especially on set pieces, by Manchester United's heavy mob was the most impressive.

There was a moment against Watford where Gomes had Chris Smalling, Marouane Fellaini and Ibrahimovic all bearing down on him but he met them head on and left all three in a heap as he punched the ball clear of danger. Most impressive.

However, my tip for the title are suddenly looking very shaky and unsure of themselves. United have some fabulous players but I can't help feeling manager Jose Mourinho is accommodating certain individuals in order to keep them onside and he has yet to create a team.

I understand it is still a work in progress but Manchester City are getting away. There comes a time when the manager has to make some really tough decisions in order to get the best out of his best players. It's about results not reputations.

If Mourinho doesn't find out his best team and system soon he may find more individuals like Gomes standing up to his superstars.

The Irishman's goal against Middlesbrough was a centre-forward's finish if ever I saw one. Every so often you find full-backs who are better in the opposition's box than their own and Seamus Coleman is one of them.

We know he loves to go forward and get involved in the action but what he does when he gets in the box is quite extraordinary. He has this remarkable ability to switch into a finisher. I've noticed this feature before with Coleman and it only comes from the sheer thrill of scoring goals.

Lots of defenders want to score but lots of them are afraid to try. It's one thing wanting to score goals but it has always been about having the courage to try.

I went to this game and there were a number of worthy performances in defence for Liverpool on the night but Joel Matip was probably the most notable for me.

Matip wasn't the least bit concerned about the threat from Diego Costa. In fact, in the first half it was Matip who - consistently and quite deliberately - gently nudged Costa in the back, causing the striker to miscontrol the ball.

It's a trick clever defenders employ in order to stop the striker from setting the play, and it often goes undetected by the referee as it appears as though the striker's control is poor. Why such dark arts should thrill me on this occasion I'm not entirely sure. I suppose anything done well should be applauded.

He's only gone and done it again. Admittedly, it wasn't as impressive as the one he scored against Bournemouth when he rescued a point for the Eagles but it was just as important. Dann's header put the game well beyond a Stoke side who looked like they'd just met and were playing together for the first time.

Potters manager Mark Hughes has arguably the most talented bunch of players I have seen in a Stoke team for years but they look particularly vulnerable this season. The lack of confidence throughout the entire team was palpable.

Palace manager Alan Pardew was facing a similar problem some months ago but managed to turn it around with astute signings and a great deal of belief. I sense Hughes and his players require a good deal of the latter.

I was most impressed to see Jan Vertonghen performing so comfortably at full back for Spurs against Sunderland. I've seen centre-backs try that transition in the past and there are few who have the ability to do it.

The same is true of Eric Dier, who also looked extremely comfortable in a less familiar role in the centre of defence. This ability to shuffle the pack at the back like this is a real asset for Spurs boss Mauricio Pochettino, which is just as well because his side suddenly started dropping like flies against Sunderland.

Mousa Dembele and Dier had to go off with tight hamstrings, Harry Kane left the scene on a stretcher, and Kyle Walker managed to finish the game but cautiously after feeling his hamstring earlier in the game as well. With a demanding Champions League season ahead, I hope Spurs have got what it takes to compete at the highest level.

What a goal by Jordan Henderson. The lad is not renowned for scoring goals but when he does, they really are something special.

After the game I sat listening to Chelsea manager Antonio Conte trying to rationalise how his team could have stopped the thunderbolt that put the game beyond his side.

He should know that sometimes in football you are better off accepting the moment of brilliance and not tear yourself apart about how your team might have robbed the paying public of that magic moment.

Henderson was quite superb throughout this encounter and so were Liverpool. What Conte was really struggling with was that his team were, on the day, beaten by the better side and that is a difficult pill to swallow.

When Liverpool fans start picking players out for special attention, rest assured they have seen something worthy of praise. Adam Lallana's work-rate has been quite phenomenal recently and a major feature in Liverpool's victory over Chelsea.

I've been one of the critics Liverpool boss Jurgen Klopp claims have found a "hair in his soup", which when roughly translated means a fragile defence. However, with Lallana, Henderson and Georginio Wijnaldum acting like nightclub bouncers harassing the undesirables the moment the opposition get anywhere need their goal, is it any wonder that Liverpool are starting to look like a team again?

At the risk of finding another 'hair in the soup', my only concern would be that in an effort to create the team ethic you don't lose the magic of Philippe Coutinho. If you keep substituting the Brazilian you'll destroy him. Lallana is developing into an impressive player but he is no Coutinho.

Sometimes a player moving clubs is in everyone's best interests. Spurs received a decent price for the Belgian playmaker and West Brom have a player who is a class act.

His performance against a lamentable West Ham must have delighted the new Chinese owners, not to mention manager Tony Pulis. Managers get a £13m record signing wrong and directors start issuing P45's. But Pulis need not worry, I believe his job is safe in Chadli's hands.

Spurs fans are already announcing their disgust about the player's departure on social media and I think they have a point. Chadli is the sort of cultured player a team needs during a Champions League season.

Meanwhile, Slaven Bilic has problems. If he can't stop his team haemorrhaging goals they could soon be playing Championship football in that lovely new stadium of theirs.

Last week I said that Kevin De Bruyne was already a certainty for player of the season. Well, manager Pep Guardiola seems to think that he's the nearest thing to Lionel Messi, which rather puts my suggestion into perspective.

I interviewed De Bruyne for Football Focus last season and what was abundantly clear was that, apart from being a talented footballer, he was incredibly level-headed and unspoilt by the game's excesses. Yet on the field of play, De Bruyne is so wonderfully extravagant he makes football a joy to watch.

The performance against Bournemouth was sublime but, for all of Manchester City's progress under Guardiola, they must win something otherwise all their flamboyant football will count for nought.

Another impressive performance by Raheem Sterling. His first assist when he politely laid the ball for Kelechi Iheanacho to sidefoot home was intelligent as opposed to greedy. The same was true when Iheanacho returned the compliment to Sterling to score in the second half.

What is becoming very apparent is that Guardiola is developing a culture at City that insists his players are playing the right ball for the right reasons. There is nothing selfish about it. It requires courage and foresight and at the moment Sterling is displaying an abundance of both.

What a way to make your Premier League debut - with two well-taken goals. He was also part of the very impressive 3-0 win over Club Brugge in Leicester City's first Champions League win in midweek.

There is no doubt that Islam Slimani's presence in the side has taken considerable pressure off Jamie Vardy and it looks like he has become an instant hit at the King Power Stadium. Slimani looked like a wolf hunting amongst the foxes against Burnley.