The 20 clubs in the Premier League have benefited from a record £5.1bn television deal which came into effect this season.

"The increases in broadcast revenue, with the 2016-17 season being the first of the new broadcast deal cycle, is the principal driver of this spending power," said Dan Jones, a partner at financial analyst Deloitte.

This graphic below illustrates the gradual increase in spending by Premier League clubs over the past 10 January and summer transfer windows. 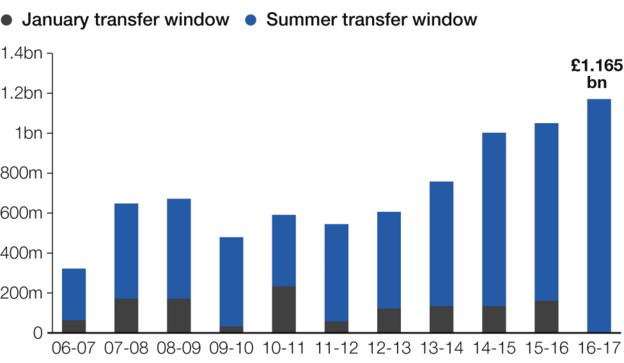 Such financial strength owes much to the record £5.136bn domestic TV deal, which was more than £2bn larger than the previous contract from 2013 to 2016.

Former England winger Trevor Sinclair said: "There's so much money in it for a reason - supply and demand. People demand to see the Premier League."

He added that the players would be the chief beneficiaries.

"If anyone is going to get the financial gain, surely it has to be the players," said Sinclair. "They are the ones who make it happen."

Below is a list of the biggest fees spent by Premier League clubs during the 2016-17 summer transfer window: 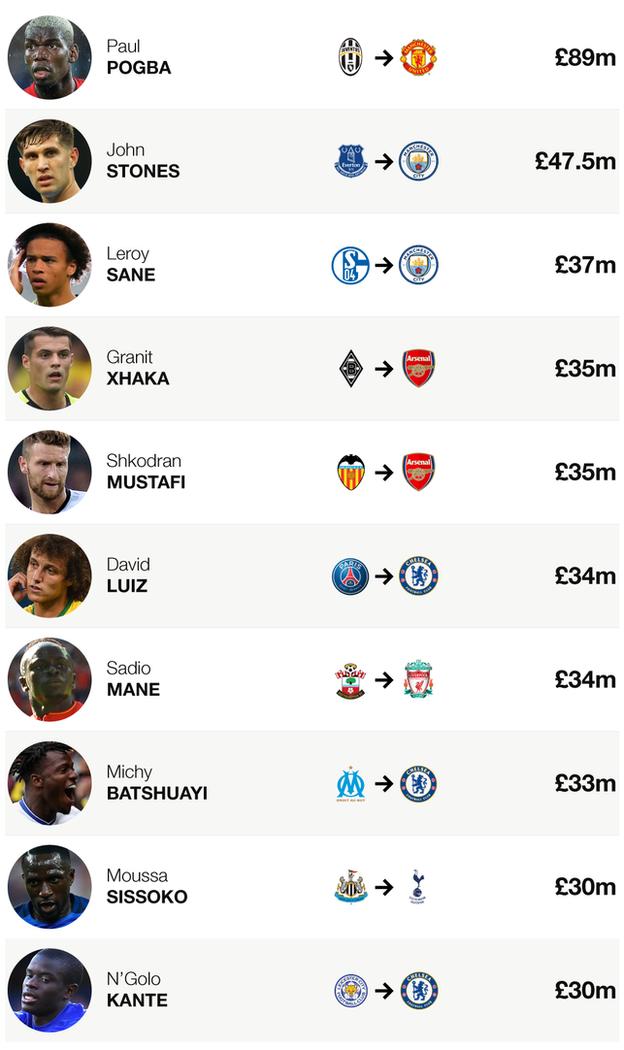 The two Manchester teams each spent more than £150m in the window.

Manchester United, under new boss Jose Mourinho, ended what was becoming a protracted saga by signing Paul Pogba for a world-record £89m.

They also added Armenia midfielder Henrikh Mkhitaryan and Ivory Coast defender Eric Bailly, both at a cost of about £30m.

City, who also have a new manager in Pep Guardiola, brought in midfielder Leroy Sane from Schalke for £37m and then paid Everton £47.5m for defender John Stones.

After a season that could be classed as terrible by their standards, Chelsea owner Roman Abramovich gave another new managerial recruit - Antonio Conte - extra spending power.

In an effort to rejoin the Premier League's top four, the Blues spent £120m, including £34m on bringing back Brazil defender David Luiz from Paris St-Germain and £33m on Belgium striker Michy Batshuayi from Marseille.

This was also a window when clubs vying for a top-four spot sent players out on loan who, only last season, were seen as first choice.

About £153m worth of talent, based on the fees paid for them, found temporary homes in this window.

Chelsea loaned out 38 players - five more than this time last season. Midfielder Juan Cuadrado, who cost £23.3m, signed up to another season at Italian champions Juventus, and £6m forward Lucas Piazon will spend his 2016-17 season at Fulham. It is the fifth club the Blues have loaned the 22-year-old to.

Chelsea defender Nathan Baxter, 17, will play for Metropolitan Police in the Isthmian Premier League - the seventh tier of English football - until January.

Meanwhile, West Ham's £12m forward Enner Valencia will be at Everton this season and Arsenal's England midfielder Jack Wilshere, who has made more than 100 appearances for the Gunners, has relocated to Bournemouth.

There was a record £215m gross spend by Championship clubs, more than twice the previous record.

However, the disparity of wealth between last season's relegated clubs and seasoned Championship campaigners was once again highlighted.

Newcastle and Aston Villa made use of the £64m parachute payments - guaranteed after dropping down a division - and spent more than £110m between them during this window.

Villa's outlay was more than £60m. It included £11m on striker Jonathan Kodjia from Bristol City, which might rise to a Championship-record fee of £15m, and the £12m paid to Fulham for forward Ross McCormack.

The Magpies finished the window with a net profit of more than £30m, despite spending more than £54m on players.

That was largely as a result of the Championship-record £30m deadline-day sale of midfielder Moussa Sissoko to Tottenham.

Norwich City, who lost a year's worth of parachute payments having stayed in the Premier League for only one season, spent about £15m.

The English Championship was the fifth-biggest spending league in Europe, beating the amount spent by France's Ligue 1.

The graphic below shows the order of the amount spent by Europe's 'big five' leagues. After the Premier League, the next highest spender was Serie A, with a gross spend of £590m. Then came the Bundesliga with a spend of £460m, followed by La Liga (£400m) and Ligue 1 (£165m).

Brazil defender David Luiz was the star attraction following his return to Chelsea from Paris St-Germain.

His move generated around 330,000 tweets, followed by about 180,000 for Arsenal's Jack Wilshere, who joined Bournemouth on loan.

Other hot topics were: