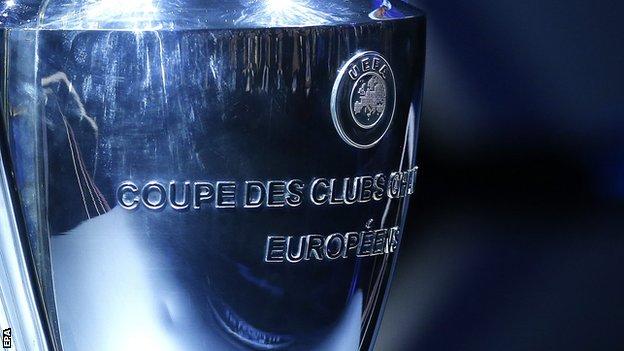 Europe's top four domestic leagues are to be guaranteed four places each in the group stages of the Champions League from the 2018-19 season.

Under the present system, England, Germany and Spain have three places each while their fourth-placed teams must win a play-off to qualify.

Italy has only two guaranteed places, plus one in the play-off round.

But it has stopped short of guaranteeing places for named clubs, such as AC Milan, Liverpool, Inter Milan and Manchester United.

They all missed out on this season's group stage after performing poorly in their respective leagues last season.

Uefa has also revealed the financial distribution to clubs will be "increased significantly" for the Champions League and Europa League.

It also said "historical success in the competition" will also be acknowledged to calculate where a league sits in its rankings.

Points will be awarded for previous European titles but weighted towards more recent success in the Champions League and Europa League.

Uefa has called the changes "an evolution not a revolution".

According to Uefa competitions director Giorgio Marchetti, the format for the Champions League will remain the same.

Following a qualifying stage, 32 teams will be drawn in eight groups of four for the right to be one of 16 sides to make it through to the knockout competition.

Europe's big clubs have lobbied Uefa for changes to the Champions League. They are conscious of a growing financial gap between themselves and English clubs following the Premier League's bumper £9bn television deal.

Uefa says it is evolving the competition by allowing the top four teams in Europe's top four leagues to gain automatic entry to the group stages.

In addition, there will be a significant increase in prize money as Uefa tries to ward off the threat of any breakaway Super League.

The timing of the announcement is significant. One of the frontrunners to be the next Uefa president, Slovenian Alexander Ceferin, has built support from many smaller nations that could well sweep him to power next month.

Those smaller associations are keen to curb what they see as the excesses of the bigger countries and clubs. But this move has pre-empted that and tilted the axis of Uefa's club competitions a little further in favour of the big beasts.