Gary Lineker kept his promise and introduced the opening Match of the Day of the new season in his underpants.

Former England captain Lineker, 55, pledged to "do the first MOTD of next season in just my undies" if former club Leicester won the Premier League.

The Foxes went on to win their first top-flight title by 10 points.

"It is a one-off and a sporting miracle that has landed me in my underwear," said Lineker, who scored 95 goals in 194 appearances for Leicester.

"When I tweeted that silly bet back in December, I categorically knew there was zero chance of Leicester winning the league. Zero chance. It happened but it was magical, it was great."

Lineker managed to keep a straight face, while MOTD pundits Alan Shearer and Ian Wright giggled in the background, as he opened the programme.

Lineker stayed in his underwear as Shearer and Wright analysed Leicester's opening-day defeat by Hull. But as the programme moved on to the second match, he told viewers: "Enough of this nonsense - I'm going to get dressed!"

He returned to discuss Manchester City's game against Sunderland wearing a shirt and trousers.

Lineker tweeted following Leicester's 2-1 win against then champions Chelsea, a victory which moved the leaders two points clear after 16 games.

And his preparation for Saturday's Match of the Day did not just include meticulous pre-match research and practising his lines... 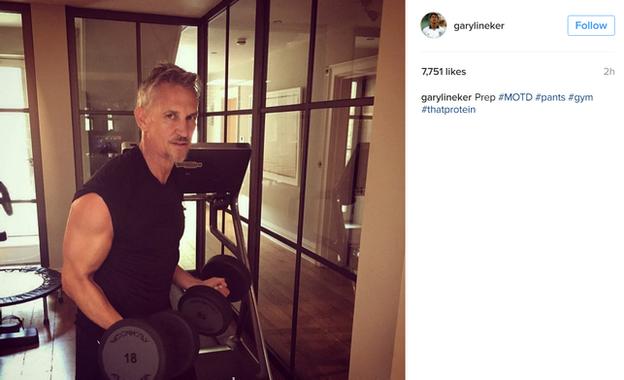 Take part in our new Premier League Predictor game, which allows you to create leagues with your friends.