Gareth Barry's close-range header secured Ronald Koeman's first victory as Everton manager as they came from a goal down to win at West Brom.

The home side went in front inside 10 minutes as Gareth McAuley headed in a Craig Gardner corner at the far post.

Everton carried more threat once Romelu Lukaku came on as a first-half substitute, and Kevin Mirallas rolled in an equaliser just before the break.

Barry then forced the ball in after Mason Holgate's touch from a corner.

Koeman said after the match that Lukaku would be staying at Everton - good news for Everton fans concerned that the striker may return to former club Chelsea.

The Belgium international, bought by Everton for a club-record £28m from Chelsea in 2014, was his team's top scorer last season, and his power up front played a significant part in turning the game around.

Koeman's team were flailing in attack for much of the first half, with the 5ft 9in stature of Gerard Deulofeu proving little match for Albion's 6ft 5in centre-half Jonas Olsson.

Lukaku, still straining for fitness after a recent heel problem, was thrown on to give Olsson a rougher time, with Deulofeu switched to the right flank. It worked, even though the Belgian did not score himself.

Everton, who dominated possession throughout, began to create more openings - and made them count. Lukaku passed up a great late chance to make sure of victory, as he was denied by a fine Ben Foster save, but his job was done.

Albion succeed and fall with the set-piece 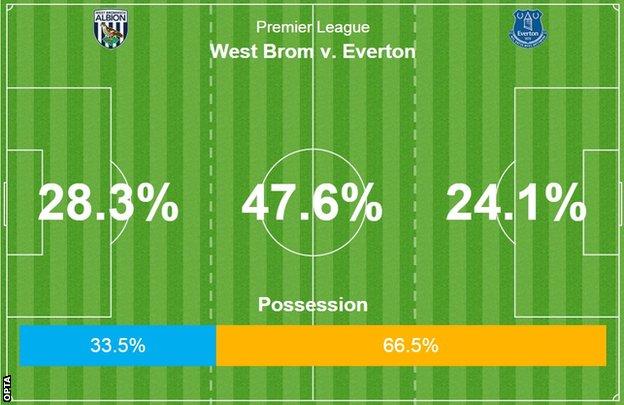 Before kick-off Koeman was asked in a television interview if he had made special plans to counter West Brom's threat from set-pieces. He said that he had not.

When McAuley headed in Gardner's corner early on, it looked as if Everton would pay for that approach.

It certainly raised hopes for Guochuan Lai, the Chinese businessman who led a takeover at Albion earlier this month, and who was watching his new club in person for the first time.

Albion were managing to make life uncomfortable for Everton's three-man central defence, despite having only around a third of the possession.

Yet if the loss of a goal seconds before half-time knocked the home side off their stride, it was the manner of Everton's second that was something of a surprise.

Head coach Tony Pulis prides himself on having well-drilled teams, yet they were caught out defensively from a corner, with Barry getting free of his markers to turn in a loose ball that should have been dealt with.

Pulis expressed concerns before the match about the strength of Everton's bench - which included Lukaku, Yannick Bolasie and Ashley Williams.

"It's a top-six bench," said the West Brom coach, who has struggled to strengthen his own squad during the summer, bringing in only winger Matt Phillips from QPR for £5.5m.

The fact that Koeman had options in reserve undoubtedly helped. Winger Bolasie, signed from Crystal Palace during the week, was excellent after coming on, racing past Jonny Evans down the right to deliver a cross that Ross Barkley somehow headed wide with under 20 minutes to go.

Yet Everton's willingness to mix up their approach - not always the case when they played a possession-based game under Roberto Martinez last season - was also a factor in changing the game.

Their equaliser was straight out of the Martinez playbook, with Barry and Barkley exchanging quick passes to feed Mirallas, whose shot had just enough on it to beat Ben Foster.

Yet they were prepared to go direct to Lukaku when needed, and carried a threat at set-pieces, with Foster reacting well to save Ramiro Funes Mori's header from a free-kick seconds before Barry's winner.

The EFL Cup is next up for both teams on Tuesday: Everton host League Two side Yeovil, while West Brom go to Northampton, of League One.