When Jonathan Greening collected his Champions League winner's medal at the Nou Camp in 1999, little did he know that 17 years later he would be in his wellington boots clearing fish from Tadcaster Albion's flooded pitch.

The Brewers midfielder, an unused substitute when Manchester United beat Bayern Munich in the most dramatic of circumstances in Spain, sprang into action when the Yorkshire town was ravaged by floods and his latest club suffered more than £300,000 worth of damage at the start of the year.

"The water was not just up to the ankle or knee - it was eight or nine feet deep and it was flowing rapidly," said Tadcaster chairman Matthew Gore, whose side entertain Northern Premier League Division One North rivals Scarborough Athletic in one of 160 FA Cup preliminary round ties this weekend.

"Jonathan was down at the ground in his wellies and overalls. There were fish in there and he was helping, along with many others, clear up."

After leaving Old Trafford, Greening's career highlights include winning the League Cup with Middlesbrough in 2004, leading West Bromwich Albion out at Wembley in the 2008 FA Cup semi-final and playing in the 2010 Europa League final for Fulham.

The York-based 37-year-old is ending his career playing for free alongside his younger brother, Josh, a striker, in the eighth tier. He could not be happier.

"It's not about the money," Greening, who started his second spell at Tadcaster last December, told BBC Sport. "It's about the banter, your team-mates and it's nice to spend a bit of time with my brother.

"When we won the Northern Counties East Football League last season it felt as good as 2008 when West Brom were promoted to the Premier League after winning at QPR.

"I've been fortunate enough to have some amazing experiences in my career.

"I'd only been at Old Trafford a few months when I found myself on the bench for the Champions League final in 1999 because Paul Scholes and Roy Keane were suspended.

"I was given Luis Figo's dressing-room locker and he'd left all his cup medals in there. I couldn't believe he'd left them in his locker. It was a crazy night. You have to remember I was only 20 and I was a United fan."

Greening will miss the Scarborough tie as he is on a family holiday but will be available should Tadcaster, promoted from Northern Counties East last season, advance to the first qualifying round.

"He said 'just cover my expenses as I have had enough out of football'. He still ended up giving his expenses back to the club at the end of last season."

From Cafu to Clitheroe

There will not be many managers at this stage of the FA Cup who can boast of playing in an international against a Brazil team sprinkled with World Cup stars.

Nineteen years on, Clitheroe boss Simon Haworth clearly remembers the words Dean Saunders said to him before he stepped out for his first Wales start against the likes of Cafu and Rivaldo in Brasilia in 1997.

"Deano turned around and said 'they might be world champions but we will get chances'. He was right," said Haworth, who was aged 20 at the time and playing in the top flight for Coventry City under Gordon Strachan. "He missed a one-on-one and I had two headers which were saved."

Wales, under Bobby Gould, lost the friendly 3-0 to a team that three years earlier had won the World Cup in the United States.

He made five appearances for his country and went on to play alongside Roberto Martinez, the recently appointed Belgium boss, and Michael O'Neill, the Northern Ireland manager, at Wigan before suffering a career-ending injury at the age of 28 while at Tranmere.

After coaching Shrewsbury Town's attacking players, Haworth, 39, is now cutting his teeth in management at Northern Premier League Division One North Clitheroe, who are at home to Consett, from the ninth-tier Northern League Division One, on Saturday.

"I'm loving it," added Haworth, who was appointed in May, and has former Wales and Derby defender Gareth Roberts as his assistant at Shawbridge. "Clitheroe is a great non-league club."

Three months into his reign there is evidence Haworth's attacking philosophy is rubbing off on his part-time players - Clitheroe scored 40 goals in seven pre-season games.

It is one of the most famous goals in FA Cup history.

In 1972, on a muddy pitch, Ronnie Radford felled giants Newcastle at Edgar Street to send non-league Hereford United into the fourth round.

On Saturday, the same venue hosts Alvechurch as Hereford FC, formed after the financial collapse of United in 2014, make their FA Cup debut.

The Bulls now play in the eighth-tier Southern League Division One South & West, while Alvechurch compete in the ninth-tier Midland League Premier Division.

History will be made when Guernsey, who play in the eighth-tier Isthmian League Division One South, entertain Thamesmead Town at Footes Lane on Saturday.

It will be the first FA Cup tie to take place on the Channel Islands. "To bring the iconic competition to Guernsey will be something special," said boss Tony Vance. 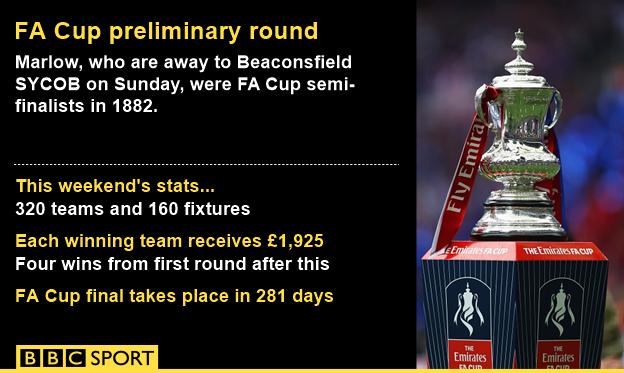 On Saturday the former Premier League striker, who turns 41 later this month, is set to appear in the FA Cup for Farnborough, who play in the eighth-tier Southern League Division One Central.

Released by Dagenham & Redbridge after they were relegated from League Two last season, Cureton has agreed to turn out for the Hampshire part-timers on a temporary basis as he looks to earn a full-time contract elsewhere.

The former Reading and QPR forward has already made an impact for his new club, scoring twice in three appearances.

"He's very fit for 40 and I know he wants to carry on playing in the Football League," said Boro boss Spencer Day, whose side entertain ninth-tier Hellenic Premier Division side Longlevens.

"He could have scored five on Saturday but he's fitted in very well and is playing with a smile on his face."