Involved at this early stage is a former semi-finalist-turned-manager while Cheddar - hailing from the Somerset village famous for cheese - are in the FA Cup for the first time in their 125th anniversary season.

In addition, at least two teams have been forced to bring forward their fixtures for unusual reasons.

All the FA Cup extra preliminary round fixtures

From the Nou Camp to Pickering Town

Tony Hackworth was aged 20 when David O'Leary sent him on as a substitute for his Leeds United debut. He has good reason to remember it as it was at the Nou Camp against Barcelona in the Champions League.

Sixteen years on, Hackworth is player-coach at ninth-tier Northern Counties East Premier Division Pickering Town, who are away to Sunderland Ryhope CW on Saturday.

"I remember we got absolutely battered by Barcelona," recalled the 36-year-old, who joined Leeds as a 15-year-old forward and left in 2001 when Notts County signed him for £120,000.

Hackworth did at least manage to leave the Nou Camp with a souvenir of his visit after exchanging shirts at the end with former Arsenal midfielder Emmanuel Petit.

"It's in a frame, hanging on one of my walls at home. I doubt my shirt is hanging on his wall..." added the Durham-born player.

Hackworth went on to make another substitute appearance that season against Lazio as Leeds reached the semi-finals of the Champions League before losing 3-0 on aggregate to Valencia.

Competition for places and injuries cut short Hackworth's Elland Road career and, after three seasons at Notts County, he has spent the last 12 years playing non-league.

Hackworth is not contemplating retirement just yet, not even after a ruptured Achilles tendon in a pre-season friendly has left him facing nine months on the sidelines.

However, he fully intends to spend this season in the dugout in his role as coach of Pickering, nicknamed the Pikes and founded in 1888.

When was the last time an FA Cup tie was moved because of a scarecrow festival?

Hinckley AFC, who play in the Leicestershire village of Heather, have brought forward their home tie with Heanor Town because it clashes with one of the area's biggest annual events - the Heather Scarecrow Festival.

Hinckley AFC, whose team includes former Wolves midfielder JJ Melligan, were due to host the tie on Saturday at the ground they share with Heather St John's FC.

Their facilities are being used for the festival - which attracts thousands of visitors every year - and the match will now take place on Friday (19:45 BST).

"This is our third season at Heather but it's the first time we have had to move a game because of the scarecrow festival," said Steve Jelfs, chairman of Hinckley AFC, who play in the 10th-tier Midland Football League Division One.

Another club to bring forward their tie is Ascot United, whose ground has the Berkshire town's famous racecourse as a backdrop.

They also play on Friday against Milton United as Saturday is the date for the racecourse's Shergar Cup, which is expected to attract a crowd of around 30,000.

"There are not many clubs whose ground is connected to a racecourse," said Steve Brine, director of communications at the ninth-tier Hellenic League Premier Division club.

Ascot, incidentally, featured in the first FA Cup tie to be broadcast live on Facebook, when they played Wembley at this stage of the competition in 2011 and attracted their record attendance of 1,149.

Some clubs have waited longer than others

Fifteen clubs are making their FA Cup debuts and, while Cheddar have had to wait until their 125th anniversary season, Coventry United are only three years old.

United were founded in 2013 by Coventry City fans Jason Kay, Jason Timms, Marcus Green and Peter Schofield after the Sky Blues moved to Northampton due to a rent dispute.

"It wasn't a protest. Coventry City moved out of the city - it just wasn't for us," said vice-chairman Schofield ahead of United's home tie with Shawbury on Sunday.

United, who play in the city's civic colours of red and green, have won three successive promotions and play in the ninth-tier Midland Football League Premier Division. They have also set up an academy.

Schofield was at Wembley when City won the trophy in 1987. "It gets no better than the FA Cup," he said.

Cheddar, founded in 1892 and predictably nicknamed the Cheesemen, have had to wait considerably longer to play in the prestigious competition.

The Somerset village team play in the 10th-tier Western League Division One and will make a 250-mile round trip to Bodmin Town, who are champions of the 10th-tier South West Peninsula League.

"It's a great honour to be in charge of the club when they enter the FA Cup for the first time," said Cheddar manager Jared Greenhalgh.

The 15 clubs making their FA Cup debuts this weekend 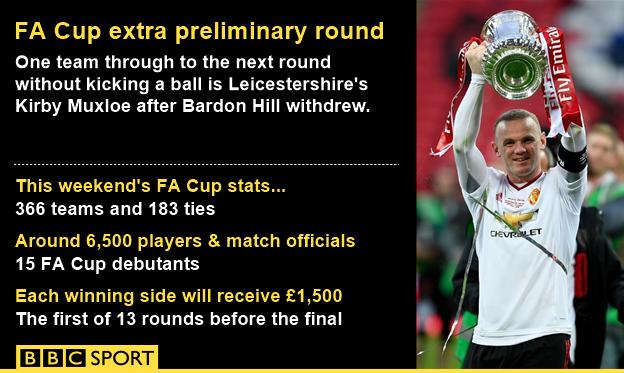 Rufus Brevett once played in an FA Cup semi-final but is relishing the chance of masterminding a money-spinning run as a non-league manager.

The 46-year-old former defender is in charge of Combined Counties League Premier Division side Hanworth Villa, 14 years after being denied a place in the final by Chelsea.

Brevett was part of Jean Tigana's Fulham side which lost to John Terry's goal at Villa Park in 2002.

Appointed by Hanworth in the summer, Brevett is now hoping to create some FA Cup memories as a boss after serving the likes of Gerry Francis, Kevin Keegan and Alan Pardew as a player.

He is also looking to earn his part-time club some revenue - starting by beating Knaphill on Saturday - with the winners of this weekend's ties picking up £1,500.

"I don't have to go home and wash the kit, but finance is everything at this level."