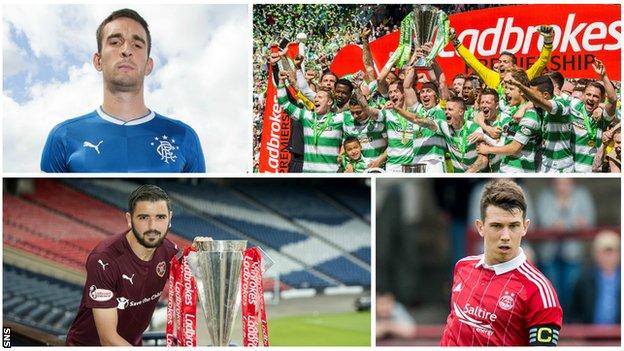 The new Scottish Premiership season begins this weekend. Four of BBC Scotland's football pundits share their predictions on the likely winners and strugglers.

"They've got the biggest squad and Brendan Rodgers coming in will bring a feel-good factor. They're odds-on."

"Rangers have got to do what Hearts did last year and find their feet in the league. Aberdeen might struggle with the extra competition. Hearts could build on last year's experience."

"Unfortunately, it's going to be the same teams fighting relegation. It might just be Thistle and Hamilton propping them up at the end of it."

"It will be interesting to see, can he fulfil his potential coming back to Scotland?"

"You've still got to go with Celtic with a new manager in place. Their strength in depth would make them favourites."

"I feel Aberdeen are still strong enough to do that even though Rangers are in the league. I look at their strengthening over the summer. They've held on to their important players."

"Killie still seem to be in a bit of disarray. I think it's going to be a struggle for them. They would be the team I would be nervous about."

"He's on fire just now, off the back of the European Championships [with Northern Ireland] and the confidence he's gained from that. The first half of the season in particular, I'd expect him to be on top form."

"There's obviously not been a great deal done in the transfer market, yet. I think Brendan Rodgers will improve the side, regardless. I think they will win the title."

"I do like the look of Rangers. It's a tough one between Rangers and Aberdeen. I think, perhaps, Rangers would nick it. If Aberdeen get into the Europa League group stage, then they could have a lot of extra games."

"For the last few seasons, Kilmarnock have been on a downward spiral. If they don't get off to a great start, it could be a difficult one to turn around."

"Patrick Roberts is absolutely on fire at Celtic. He was clearly a top player last year. This season, he's going to be a huge player for Celtic, one of their main attacking outlets."

"Their summer signing policy has been very good. When they make a change to the team, it doesn't necessarily weaken the team. They've got a strong squad."

"They were very disappointing last season and they seem to have signed mostly untried players from England, who possibly don't know how to play in the Scottish Premiership."

"He was outstanding last year and he has started this season well. On his day, there is nobody better in his position in Scotland."