Manchester City midfielder Fabian Delph says he has learned more from new boss Pep Guardiola in three weeks than he had done in his entire career before.

The 26-year-old has made 129 Premier League appearances in a career about to enter its second decade.

Delph has had Martin O'Neill, Paul Lambert and Manuel Pellegrini as bosses - but says Guardiola is different.

"The first three weeks have been amazing. I've learned more than I have throughout my whole career," he said.

"It is a big statement but it is the truth."

Guardiola has earned his reputation for being one of the finest coaches in the modern era through his work at Barcelona - where he won two Champions Leagues and three league titles - and Bayern Munich, who were champions in each of his three years in charge before he left Germany to join City this summer.

"It is the way he simplifies things. His way of playing. The way he sees things. You will see what he is trying to do in the forthcoming games," explained Delph.

Guardiola has had Delph training in defence as he starts to understand the capabilities of his squad.

Delph is not anticipating it will lead to a Javier Mascherano-style switch to centre-back as Guardiola implemented at Barcelona.

Nevertheless, a need to understand different roles is part of the new City manager's philosophy.

"The manager has a lot of different systems and it is all about learning different positions," said Delph.

"I am on a big learning curve. If that can keep going I would be very happy. I don't think I will be a centre-back but you will be pleasantly surprised."

'The future is bright for England'

Delph was named in England's provisional Euro 2016 squad but was not considered for selection in Roy Hodgson's final 23-man party as he was suffering from a groin injury.

The tournament proved to be the end of Hodgson's time in charge after England were embarrassed by Iceland at the last-16 stage.

Sam Allardyce was confirmed as Hodgson's successor on Friday and Delph, who won all his nine caps under Hodgson, does not feel the situation the new boss inherits is as bad as many think.

"The future looks bright, regardless of what you guys in the media say," he said.

"I am slightly disappointed for Roy Hodgson because he brought me into the squad but we have a young group of players with a very experienced and good manager.

"The players wear their hearts on their sleeve. They are dedicated to their craft. If we pull together we will be fine." 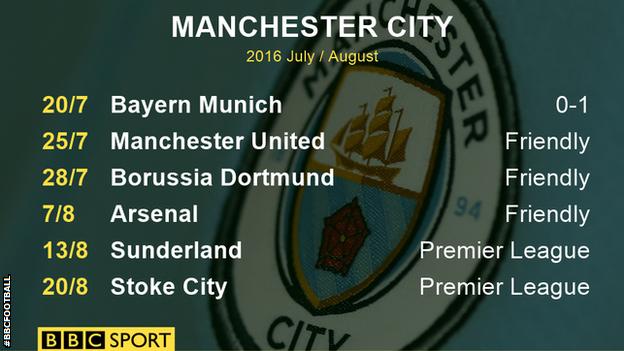