Wales are preparing for the biggest game in their history when they play Portugal in Lyon on Wednesday for a place in the final of Euro 2016.

Chris Coleman's side have already enjoyed a memorable run to reach their first semi-final at their only major tournament since 1958.

England are the only British team to have reached the final of a World Cup or European Championship, 50 years ago.

"We'll be the underdogs, but we believe in each other," said manager Coleman.

Jonathan Ford, chairman of the Football Association of Wales, told BBC Sport: "It is history in the making, it's a dream come true.

"These players will run through brick walls for us. This has been a fantastic demonstration of team spirit, team morale, teamwork.

"Sport and culture are the two things that really help us define Wales and the Welsh people."

More than half of Wales' population of three million are expected to watch their country take on regular European semi-finalists Portugal - eclipsing the national television record for a sporting event, which was only set on Friday for their 3-1 quarter-final victory over Belgium.

The Prince of Wales sent the team a "huge good luck" message, saying: "I'm sure they have got a very good chance of beating Portugal. Everyone here will be keeping their fingers crossed."

Can they do it?

Ranked a record low of 117 in the world in August 2011, Wales could end the tournament in the top six, having won four of their five games so far at Euro 2016.

They beat Slovakia and Russia in the group stages, with their only defeat a last-minute 2-1 loss to England. They knocked out Northern Ireland 1-0 in the last 16 before overcoming Belgium - the highest ranked side at the tournament - to set up the meeting with Portugal.

However, they will be without influential midfielder Aaron Ramsey, who is suspended for Wednesday's game.

The Arsenal player has been hugely influential for Wales, scoring one goal and providing four assists, and was man of the match against the Belgians. Defender Ben Davies is also banned.

"But the attitude of the players who haven't played has been fantastic and that has kept the dressing room really strong and kept the vibe really positive."

Captained by Cristiano Ronaldo, one of football's all-time greatest players, Portugal are preparing for their seventh major semi-final and fourth in the past five Euros.

They drew all three group games before beating Croatia 1-0 after extra time in the last 16 and then edging Poland 5-3 on penalties in the quarter-finals.

All eyes will be on two players on Wednesday - Gareth Bale and Cristiano Ronaldo.

The Real Madrid team-mates are seen as the talismans for their respective sides. Bale has three goals at Euro 2016 while Ronaldo has two.

Bale became the world's most expensive footballer when he joined Real from Tottenham for £85m in 2013, surpassing the £80m the Spanish club paid Manchester United for Ronaldo four years earlier.

Their relationship has been the subject of intense media scrutiny, with both insisting there is no rift.

"Of course we get on very well at Madrid, we enjoy playing with each other," Bale, 26, said.

"He's a fantastic player, everybody knows what he can do. But we have always spoken about what we do, what we do ourselves as a team. We don't worry about the opposition."

How many Welsh will be there?

Wales are expected to be backed by more than 20,000 fans in Lyon, with fans travelling by road, sea and air to be a part of their nation's moment of history.

There are concerns some fans could be hit by French air traffic control strikes, days after hundreds of Wales supporters were affected by Eurotunnel delays before their quarter-final.

If Wales do beat Portugal, they will face either hosts France or world champions Germany in the Euro 2016 final at the Stade de France on Sunday.

Coleman's playing career was ended early by injuries sustained in a car crash.

In 2003 he became the youngest Premier League manager when he took charge of Fulham aged 32, but by 2012 his rollercoaster managerial career included being sacked by Fulham and Coventry, quitting Spanish side Real Sociedad and resigning from Greek second division side Larissa.

After his close friend Gary Speed's death, Coleman took the Wales job in 2012 and lost his first six games - the worst start by any Dragons manager.

But when Euro 2016 qualifying began, things started to change.

Speed not far from thoughts

Gary Speed, the former Wales boss who died at the age of 42 five years ago, is clearly never far from the thoughts of the players or the manager in France.

The former midfielder won 85 international caps and managed many of the members of the Wales squad.

"I was thinking about him on the plane coming over," Wales captain Ashley Williams said.

"My thought coming in was I hope he'd be proud of us. He saw us grow up, and what we've achieved today. He's always in the back of our minds. When we achieve something, we think about him."

Coleman said there is not a day that goes by on which he does not think about his friend.

"He could be sitting here where I am, enjoying what we're enjoying," he said. "Unfortunately that was taken away.

"I don't need a game of football for me to remember 'Speeds'."

It is a bit of a journey into the unknown for both sides in one sense, as they have never previously met in a competitive fixture.

Their most recent encounter was in June 2000, which Portugal won 3-0.

You would have to go several decades further back for their previous two matches, with Portugal winning 3-2 in a friendly in 1949, while Wales won in Cardiff two years later.

Portugal are considered the home team for the game, meaning Wales will have to wear their charcoal and green away kit.

That will be a bit of a blow for Wales, who have won every game they have played at Euro 2016 in their traditional red colours.

Wales wore their away kit for their second Group B game against England, which they lost 2-1. 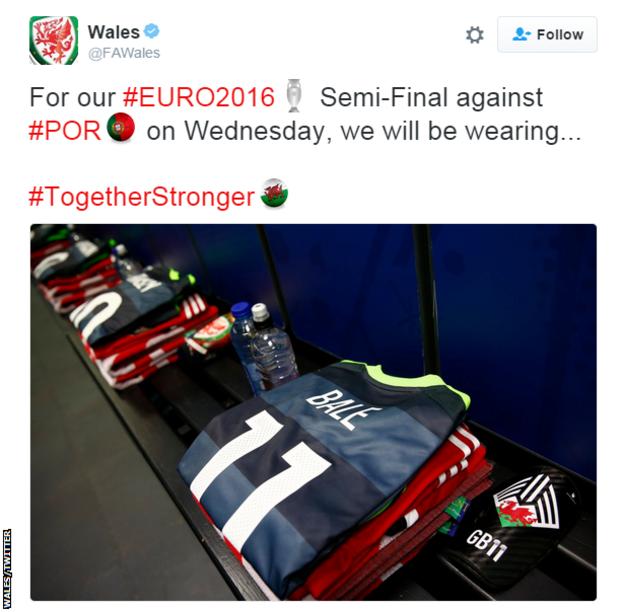 Wales' unexpected run to the semi-finals has had a knock-on effect on their families.

Coleman's wife Charlotte is due to give birth this month. Prior to the tournament, she said her husband risked missing the birth of their child if Wales did well.

Joe Ledley has had to postpone his wedding after his team defied expectation to reach the last four. He was due to marry his fiancee on Saturday.

Defender Chris Gunter will miss his brother's wedding in Mexico, while the siblings' parents have also opted to miss the nuptials to cheer on Wales at the Stade de Lyon. Instead he will do the best man speech via Skype on Thursday.

Big venue for a big moment

Cardiff's fan zone has been moved to the Principality Stadium for the game.

Until now, the fan zone was situated in nearby Cooper's Field and had a capacity of 6,000, but that has increased to 27,500 after the move to the stadium. The tickets swiftly sold out after going on sale on Tuesday.

"It will give thousands more a chance to see our boys make history," Cardiff councillor Peter Bradbury said.

There are also fan zones in Singleton Park, Swansea, as well as Rhyl, Denbighshire, Aberystwyth, Anglesey, Newport, Pontypridd and Wrexham.

Keep off the grass

Wales' players have been asked not to bring their children on to the pitch after Wednesday's game because it is "not a safe place".

Fans have been delighted by images of players including Gareth Bale, Hal Robson-Kanu and Ashley Williams celebrating with their children in their victorious run to the last four.

However European football's governing body Uefa said: "It is a European Championship, not a family party."

Welsh comedian and actor Elis James thinks Wales' impressive run at the tournament is just reward after decades of hurt.

"Because we were the unluckiest football nation in the world for 60 years, our karma bank is so much in credit," he told BBC Radio 5 live.

"This is payback for all those missed penalties and dodgy refereeing decisions.

"We could lose against Portugal and it would still be the greatest achievement in Welsh football history. If we win I'm not sure my body could cope with that much joy."