It was typical of Zlatan Ibrahimovic.

He was playing against opponents who, earlier that season, had wound him up so badly that it completely put him off his game. Players who 24 hours earlier had spoken to a newspaper to explain, in detail, how this imposter was going to be stopped.

The supporters didn't like him. Nothing was going right.

And then, taking possession 40 yards out, Ibrahimovic explodes.

A dart forward. The acceleration beginning. A quick stepover, round one opponent, speed increasing. Another stepover. Outside another, back inside the same man as he tries to recover and then a shot into the bottom corner from 18 yards.

"He could have passed," recalled one of the opponents he had left trailing in his wake. "But he had read the article. It was as if he was saying, 'Forget it guys. It's me'."

Ibrahimovic was not finished. Initial glee, wide smile, on bended knee, waving an arm in mock celebration to show how easy it was. Then something else, more serious, a point to be made. A cup-eared celebration, blowing kisses to the crowd who were already in a state of fury.

Of course we wanted him

The goal is well known among Swedish fans. The reaction to it new.

It is part of a documentary 'Becoming Zlatan' to be released in August that contains remarkable archive footage of Ibrahimovic's early years at Malmo.

Getting such close access at an early stage of his career was sheer good fortune for brothers Fredrik and Magnus Gertten, who shot the footage in 2000 and 2001 as part of a film intended to show the conflict between young and older players at their beloved Malmo.

They needed a focus for each side of the debate. They had heard of Ibrahimovic and approached him.

"The way he saw it, of course we should make a documentary him," said Fredrik.

"It suited his self image. He was only 17 but he had a very strong confidence that he would make it because he had something special."

Manchester United's newest recruit has a reputation for saying what he thinks.

Numerous times in recent weeks he refused to say where he was going, even though his destination after leaving Paris St-Germain was obvious. Instead he said he amused himself by reading what was being written and would eventually let everyone know, at a time of his choosing.

He meant it. When he posted United's badge on Instagram, he even beat his new club to the news by 24 hours.

"We are not part of the football world," said Gertten. "Our business is making social and political films. Our initial experience of dealing with footballers was that nothing of them ever comes out in what they say. Their words are controlled, boring, nothing.

"Zlatan was different. Here was a young guy who said interesting things, very honest things about himself and his emotions. It was so fresh. It made you feel warm towards him.

"The problem is people don't always like honesty. When someone says what they think it can be painful." 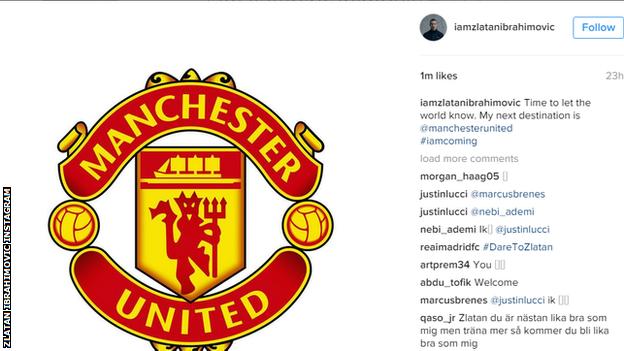 'I am just teasing'

His Croatian mother and hard-drinking Bosnian father were divorced and Ibrahimovic lived with the latter on the outskirts of town, moving regularly to earn the nickname 'gypsy',

His talent was honed on a small shale pitch outside his mum's flat. For him, football was, has been and remains fun.

As a teenager with Malmo, rather than simply beating opponents much older, he preferred balancing the ball on his foot and lifting it past them. To supporters it is magical. To opponents infuriating.

Nearly over before it has begun

Such arrogance does not come without a downside... there were times in his youth when Ibrahimovic seemed unmanageable.

Here was a kid, accepted by football people at Malmo as having the capability to become the best they had ever had, whose behaviour was so bad, even in the notoriously flexible world of football conduct, he nearly ended up without a club.

School was missed, regularly. He would spark fights in training with his poor discipline. It was the same in matches.

"He simply did not obey the rules," said Gertten.

"There was a really complex aura around him. He was over the top, aggressive. He did dirty things. Parts of the Malmo board wanted to kick him out of the club."

When his mum and dad split, Ibrahimovic went to live with his dad, Sefik. His sister stayed with his mum.

The finer points of parenting were lost to Sefik. Frequently, there was beer in the fridge but no food.

In the documentary, Ibrahimovic explains with pride how he has learned to cook and fend for himself, all apart from his laundry, which he still took to his mum.

Yet, despite the hardship, the bond with his father is strong. The need to please obvious.

Remarkably though, Ibrahimovic's mum only found out her son was moving from Malmo to Ajax for a club record 8.7m euros in 2001 after seeing it on a television report. The teenager had asked his dad what he thought of the Dutch giants, but kept the news that discussions had already taken place a secret.

"There is a mystery around Zlatan which is hiding some part of him," said Gertten.

"It goes back to his childhood. You still love your mum and dad but the child who has a problem at home normally doesn't want to talk about it because they are trying to protect their family.

"His dad didn't watch him often but you could see what it meant to Zlatan any time he did.

"But his childhood also meant he had to make his own rules. He didn't have the same integration in society as others."

With him, or against

If Ibrahimovic likes someone, the bond endures. However, if feelings go the other way, the dislike lingers.

Leo Beenhakker was the technical director at Ajax who took a chance on the Swede, and Ibrahimovic has never forgotten it.

Louis van Gaal followed him into the job. Ibrahimovic did not like it, or him. It is why, had Van Gaal remained at Old Trafford, there was no chance the 34-year-old would have moved to United.

"If you treat him with respect he will treat you with respect," said Gertten. "If you don't he will be a complicated man for you."

Ibrahimovic's loyalty is underlined by the well-documented scissor-throwing incident involving Mido at Ajax in 2003.

After a defeat at PSV Eindhoven, the two got into an argument after Ibrahimovic accused Mido of not passing. In the heated exchange, the Egyptian, who had been cutting the tape from his socks, threw a pair of scissors which narrowly missed the side of the Swede's head.

Within 10 minutes, all had been forgiven and the pair were joking about it in a jacuzzi.

Ibrahimovic was the first person to publicly speak out for his friend. "I made mistakes in Sweden," he said. "It's a new day. You become older. You grow up."

And then, to the television journalist posing the questions, he said: "Have you made mistakes? Nobody is talking about them because you are only a reporter."

A complex character and the media

We know so much about Ibrahimovic. But what do we really know?

In the documentary, as a teenager in Sweden, he speaks often about his girlfriend and the life they will have together in the Netherlands. She also thinks that is how it will be. Yet when he went to Amsterdam, she was hardly ever spotted at Ajax and one day he announced, glibly, that they had split.

Long hours were spent alone at his house in a small suburb of the Dutch capital - the kind of place perfect for a young family but completely at odds with the wild child image growing around him.

"I met him a lot during those early years," said Gertten.

"In the same year as Ibrahimovic made his debut for Malmo, the papers started with specialist sports sections. He was born for that. There were Zlatan headlines every week for a whole year even though Malmo were in the second division.

"In the beginning he was really flattered but suddenly the newspapers were doing conflict stories.

"When he got his driving licence he went to the area where the prostitutes were and pretended to be the police and scared away the customers. It was a practical joke. But it got headlines. That was shocking for him. He was upset about it."

All can be resolved with a smile

It is many years since Gertten and Ibrahimovic spoke. The player's advisors were told of the documentary. They did not obstruct its making, neither have they assisted.

The material, 15 years old, has been sifted through meticulously, most of it didn't make the cut. What did is compelling.

"I once read a book by a researcher who did work with kids who ticked all the boxes for someone who would go to prison," said Gertten. "With the ones who didn't, one of the things that saved them was the ability to create positive emotions.

"In that sense, Zlatan's smile has been a lifesaver. The warmth that comes out of that smile makes people want to help him. They forgive him things that weren't too smart. That smile has a magic. It is really strong with him. He can turn everything around with a smile."