Roy Hodgson resigned as England manager after his side suffered a shock 2-1 defeat by Iceland to crash out of Euro 2016 at the last-16 stage.

The 68-year-old had been in charge for four years after replacing Italian Fabio Capello but has won just three of 11 games in major tournament finals.

Iceland - with a population of just 330,000 - were among the lowest-ranked teams in France at 34 in the world.

"I'm sorry it will have to end this way but these things happen," Hodgson said.

"Now is the time for someone else to oversee the progress of a hungry and extremely talented group of players.

"They have done fantastically and done everything asked of them. I hope you will still be able to see an England team in a final of a major tournament soon."

Hodgson, who won 33 of his 56 games as England boss, would have been out of contract at the end of the tournament.

The former Liverpool and West Brom boss was due to discuss a possible contract renewal but Football Association chairman Greg Dyke said he would only stay on if England "do well" in France.

In a statement issued following Hodgson's resignation, the FA said: "Like the nation, we are disappointed to lose this evening and that our run in Euro 2016 has come to a premature end.

"We had high hopes of progressing through to the latter stages of the competition and accept that we have not met our own expectations or those of the country.

"We back Roy Hodgson's decision to step down as England manager and will discuss next steps imminently."

They started the finals with a 1-1 draw against Russia before beating Wales 2-1 and drawing 0-0 with Slovakia in their final Group B game - results that left them in second place and in a tougher half of the draw.

Hodgson faced heavy criticism following the Slovakia game for making six changes to the side that had beaten Wales.

Under Hodgson's guidance, England had reached the quarter-finals of the last European Championship, losing to Italy on penalties, before a dismal showing at the 2014 World Cup.

They went out at the group stages without winning a game.

'The worst performance I've ever seen'

BBC Match of the Day pundit and former England striker Alan Shearer said of the Iceland defeat: "That was the worst performance I've ever seen from an England team. Ever.

"We were out-fought, out-thought, out-battled and totally hopeless for 90 minutes. It looked to me like Roy was making it up as he was going along."

Shearer, who revealed he wanted to become England manager before Hodgson was appointed, added: "Our players caved tonight. They caved and the manager caved."

"His loyalty to players has cost him his job. It was a horrible way to go out of the tournament."

Captain Wayne Rooney insisted tactics did not play a part in England's loss.

"I can't stand here and say exactly why it's happened," said the striker. "There are always upsets in football. It's not tactics. It's just unfortunate.

England goalkeeper Joe Hart said: "We worked hard but with no success. That is how this team will be remembered."

He added that the next manager "has a tough job on his hands".

How does Hodgson compare?

Who's next for England?

The latest odds have England Under-21 boss and former Middlesbrough manager Gareth Southgate as favourite to succeed Hodgson.

After a playing career that took him to Crystal Palace, Gravesend and Northfleet, Maidstone and South African side Berea Park, Hodgson began life in management with Halmstads in Sweden at the age of only 28, where he won two league championships.

He took over at Bristol City in 1980 but was dismissed after just four months, before returning to Sweden where he won five successive titles with Malmo.

Hodgson took over as Switzerland manager and led them to the last 16 of the 1994 World Cup finals and Euro 96 in England.

There followed unsuccessful spells back in club football in charge of Inter Milan and Blackburn, before he took charge of the United Arab Emirates. He was sacked after finishing fifth in the Gulf Cup.

He also managed Finland, but quit after failing to qualify for Euro 2008.

In 2007, he was appointed manager of Fulham and took them to their highest ever top-flight finish of seventh, followed by a remarkable run to the Uefa Cup final, where the London side were beaten by Atletico Madrid.

He then moved to Liverpool in July 2010 but left just seven months into a three-year contract.

In February 2011, he took over at West Brom and guided them clear of relegation. The following April, the West Midlands club gave the FA permission to speak to him about the vacant England manager position. 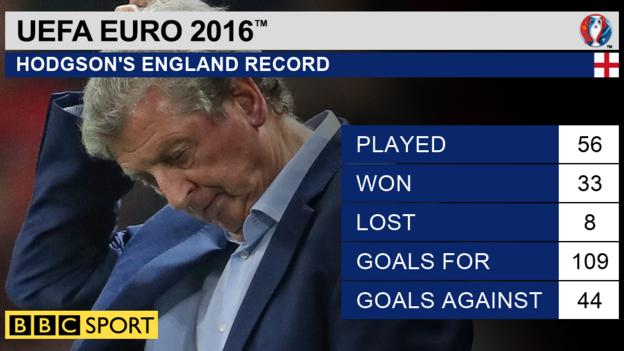