The knockout stage of Euro 2016 starts on Saturday - but who do you think have been the most impressive players so far?

By Friday morning more than 131,000 people had selected their best XI from a long-list of the star performers in the group stage.

And here is your team of the tournament so far, slotted into what was overwhelmingly the most popular formation - 4-4-2. 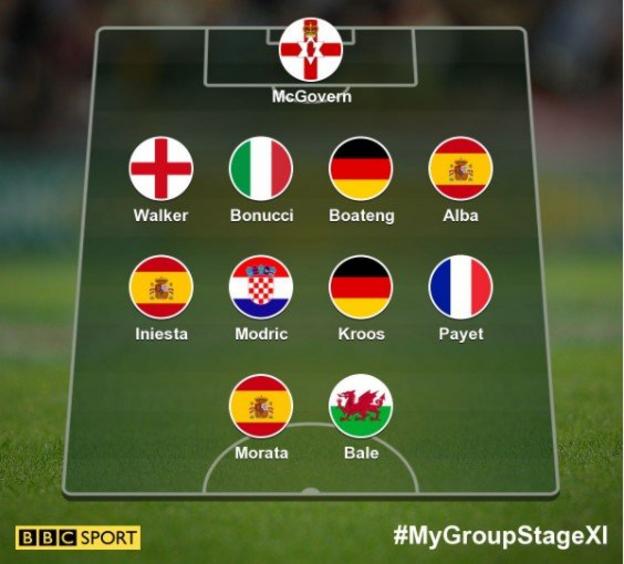 It was an extremely close-run thing in several positions - Northern Ireland goalkeeper Michael McGovern, currently without a club - was selected 33,000 times, 1,000 more than Germany's Manuel Neuer.

Germany's Jerome Boateng was the most popular pick in the centre of defence with 55% of people naming him. Italy's Leonardo Bonucci was second, just ahead of Azzurri and Juventus team-mate Giorgio Chiellini.

But by far the most popular pick was Gareth Bale, selected in 95% of teams, followed by France's West Ham forward Dimitri Payet, who appeared in 88% of your selections.

Three players from the home nations made it into the XI - and all are back in action over the next few days.

But who would you pick for their crucial fixtures?

Step into Michael O'Neill’s shoes and pick your XI as Northern Ireland bid to go far at Euro 2016 - and then share it with your friends using our team selector.