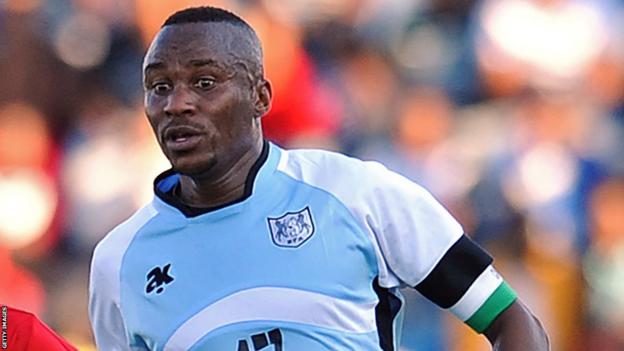 Botswana have a chance to win a first major trophy when they face South Africa in Saturday's Cosafa Cup final in Windhoek, Namibia.

The Zebras are up against South Africa's under-23 team, who are using the tournament to prepare for their appearance at the Olympic Games men's football tournament in August.

And they go into the match having caused a stir by eliminating guest team Democratic Republic of Congo in the semi-finals. However, they have managed only one goal in the tournament.

In contrast South Africa's youngsters came from a goal down at half-time to hand Swaziland a 5-1 pasting in their semi-final on Wednesday.

Botswana entered the competition at the quarter-final stage and caused immediate heartbreak for the host nation by eliminating Namibia on post-match penalties after a 1-1 draw.

It was again penalties that took the Zebras into their first final appearance, despite having their English coach Peter Butler banished to the stands after he was dismissed in the match against Namibia.

The Congolese had been favourites as they arrived in Namibia with a squad comprising mostly of the players who helped them to win the African Nations Championship in Rwanda at the start of the year.

But Botswana were better value, with Moshe Gaolaolwe putting the ball in the net but being flagged for offside and substitute Omaatla Kebatho having a ball cleared off the line.

South Africa also needed post-match penalties to get past Lesotho in their last-eight match but on Wednesday they laid down a marker in a rampant second-half performance with their young players looking to impress the coaches ahead of the selection of the squad for Brazil.

Now they say they are ready for Botswana.

"We are facing a very strong team that has over the years always wanted not to lose to South Africa - so from the onset we have a very difficult match because of that, but we are focussed and determined to do well," said South Africa forward Menzi Masuku.

"We had two tough matches but managed to pull through - although many will look at the scoreline against Swaziland and think we had it easy, but it was not.

"I believe we have now gathered some momentum and we will come out victorious.

"We are just one match away from lifting this trophy - which would be the second medal for some of us in the under 23 team following the win in Senegal, so that in itself is enough motivation to see us through.

"We have a very good group of players who also want to do well. I am confident we will return home with gold medals," added the Orlando Pirates player.

The final, on the artificial surface at the Sam Nujoma Stadium, kicks off on Saturday on 1730 BST.

It will be the 10th meeting between the two neighbours, with five wins for South Africa, three draws and two victories for Botswana which came after penalties in the Cosafa Cup in 2006 and last year.