Wales will play Northern Ireland in the last 16 of Euro 2016, while England take on Iceland and the Republic of Ireland face France.

The Republic were minutes from going out but came third in Group E with a late 1-0 win over Italy and go through.

Wales, who topped Group B, play Michael O'Neill's Northern Ireland in Paris on Saturday (17:00 BST) live on BBC One.

Martin O'Neill's Republic of Ireland side, who, like Northern Ireland, qualified as one of the four best third-placed teams, take on hosts France in Lyon on Sunday at 14:00 BST.

Northern Ireland and Wales had never reached the European Championship finals before this year's competition, the first to feature 24 teams, while it is the first time the Republic have made the knockout stages at the Euros.

The last time the Republic of Ireland played France was in 2009, when Thierry Henry handled the ball in the build-up to the deciding goal in a World Cup qualification play-off.

With a population of just 330,000, England's opponents Iceland are the smallest nation ever to qualify for the tournament.

The Republic of Ireland were heading out before a late Robbie Brady header gave them a 1-0 win over Italy and sent them through as another one of the best third-placed teams.

Winger James McClean said the sight of "grown men crying and complete love for our country" was "quite remarkable".

He added: "We knew it would be win or bust. We left nothing on the field. The best night of my life, hands down."

Goalscorer Brady said he was "absolutely flabbergasted" by the result and described it as an "out of body experience".

Had Iceland not won, England would have faced Portugal in the last 16.

The Portuguese, who now play Group D winners Croatia, knocked England out of the European Championship in 2004 and the World Cup in 2006, with both games decided by a penalty shootout.

Former Republic of Ireland international Kevin Kilbane on BBC Radio 5 live: "It does not get any better than this. We wanted this, we were desperate for this.

"It is amazing. I am so happy for Martin O'Neill, the staff and the supporters. They have done us all proud. This is incredible."

The draw means at least one of the home nations will make the quarter-finals.

Northern Ireland manager Michael O'Neill said his team will take on Wales with the benefit of having played at the Parc des Princes.

He added: "The results tonight put us in what is arguably the more favourable side of the draw, so we are pleased about that."

Harder side of the draw for England 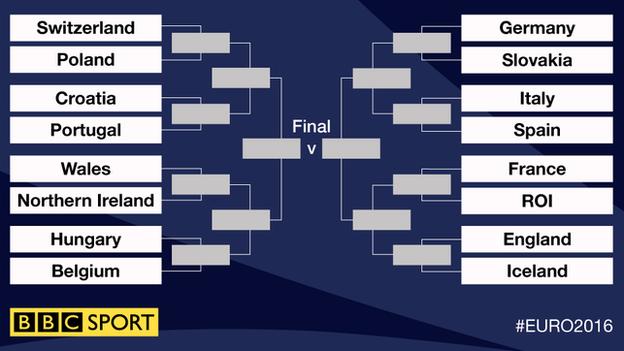 The countries in England's half of the draw have won 20 major international trophies between them, compared with none in the other side of the draw, where Wales sit.

Roy Hodgson's side have been drawn alongside previous World Cup winners and European champions Spain, Italy, Germany and France.

The most successful teams in the top half of the draw are Hungary, who were runners-up twice in the World Cup.

The top half also features Belgium and Portugal, who have both been runners-up in the European Championship.

Albania's players were rewarded with diplomatic passports after a 1-0 win over Romania gave them hope of progressing as one of the best third-placed teams, but they eventually missed out on goal difference.

Romania, denied a point against France in the tournament's opening match by a late Dimitri Payet strike, finished bottom of Group A.

Russia's players were widely criticised in the nation's media after finishing bottom of Group B with just one point, despite holding England to a draw with a late goal of their own. Manager Leonid Slutsky has offered his resignation.

Ukraine were the only side not to score and exit without a point.

Turkey's 2-0 victory over the Czech Republic gave them hope of making the knockout stage as one of the best third-placed teams, but they were denied by the Republic of Ireland's winner against Italy.

The Czechs finished bottom in Group D, while Austria scored just one goal in their three games to finish bottom of Group F.

Who would make it into your starting XI of the tournament so far?

My Team of the Group Stage

The group stage is over at Euro 2016 - but who were the best players? Pick your group stage XI using our team selector.