Wales and England are through to the knockout stages of Euro 2016 after the final round of games in Group B.

The Welsh beat Russia 3-0 to top the table at their first European Championship, with England finishing second after a 0-0 draw with Slovakia.

On Tuesday, Northern Ireland will also look to reach the last 16 when they face Germany in Paris (17:00 BST).

The top two teams in each of the six groups qualify automatically, plus the best four third-placed sides.

Chris Coleman's side - led by the tournament's top scorer Gareth Bale - destroyed Russia to leapfrog England and reach the knockout stage of a major finals for only the second time in their history.

England were frustrated by a resolute Slovakian defence but manager Roy Hodgson also came in for criticism after making six changes, which included the decision to rest captain Wayne Rooney.

Bale, scored his side's third goal against Russia and also netted in the 2-1 win over Slovakia and 2-1 defeat to England.

"We said we didn't want to make the numbers up," said the Real Madrid star.

"Well, we can't do any more than win the group. We look forward to seeing who we play next."

Hodgson admitted finishing as runners-up in the group was a "disappointment" but added: "We're not doomed yet.

"Who is to say the team we will play will be that much stronger? The way we are playing, I am not frightened of anybody."

Who could Wales face?

Wales will play a third-place team from either Group A (Albania), Group D (Czech Republic, Croatia or Turkey) or Group C (Germany, Poland or Northern Ireland).

Whoever they face, Wales will play at the Parc des Princes in Paris on Saturday at 17:00 BST.

Who could England face?

Finishing as Group B runners-up, England will face the second-placed team in Group F in Nice on Monday (20:00 BST).

That could well be Cristiano Ronaldo's Portugal, who knocked England out of Euro 2004 and the 2006 World Cup in Germany.

But it might be Austria, Hungary or Iceland, who can all still finish second.

It is the fourth time England have reached the knockout stages of a European Championship after achieving the feat in 1996, 2004 and 2012.

Wales boss Chris Coleman: "Even after this tournament is over, this group are on the way to something else. I'm just glad me and the staff are here with them. We have no fear. And after playing like that, why should we?"

Match of the Day presenter and former England striker Gary Lineker tweeted: "Total domination from England without one lucky break. Saving it for the knockout stage, hopefully. Sometimes it's easier against sides who have a go."

Former Wales midfielder Robbie Savage told BBC Radio 5 live: "On the evidence of tonight, we won't fear anyone with Gareth Bale in the team and topping the group." 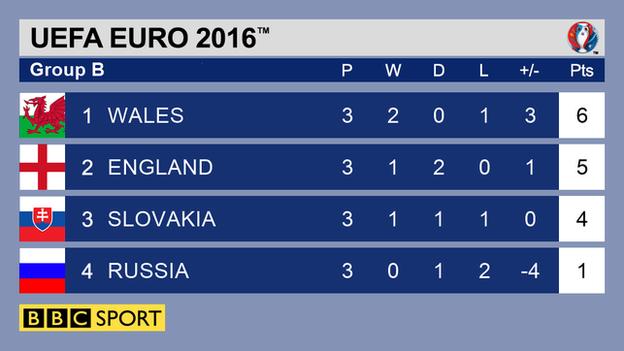 England goalkeeper Joe Hart: "We have dominated every corner of the pitch and every Slovakian player will be proud of that result. We are into the next round and nobody will want to play us. I haven't had anything to do in the whole tournament, to be honest. We have been playing very well as a team."

England defender Gary Cahill: "We had the ball constantly. We just didn't quite have that cutting edge to open them up.It wasn't to be. But we should have won the game."

What about Northern Ireland?

A draw against world champions Germany would secure Northern Ireland a place in the last 16.

That result might leave them third, but they would advance by virtue of having a point more than Albania and a better goal difference than Slovakia.

Michael O'Neill's side would top the group if they beat the Germans and Poland fail to beat Ukraine in Group C's other match.

Even defeat may see Northern Ireland advance as one of the best third-place sides, depending on what happens in other groups.

What is to be decided?

France, Wales and Italy have confirmed their places in the last 16 as group winners.

Spain are also certain to qualify from Group D.

Only Group A and Group B have completed all their matches so far.

Switzerland's draw with France secured their runners-up spot in Group A, while England have ensured progress with second spot in Group B.

The four third-placed teams to go through will be settled for certain once the final group matches are played on Wednesday.