England and Wales head into Monday's final Group B games at Euro 2016 still needing points to guarantee a place in the knockout stages.

England, who top the table after drawing with Russia and beating Wales, face Slovakia in Saint-Etienne.

Wales, who lie second after a win over Slovakia followed by a loss to England, take on Russia in Toulouse.

The top two teams qualify, but the third-placed side could also make it through to the next round in France.

Twelve teams automatically qualify from the six groups, with the best four third-placed sides joining them in the last 16.

"Nobody wants this tournament to end," said Wales boss Chris Coleman, whose side are competing in their first major finals since 1958.

Will there be trouble?

Security has been beefed up in both Saint-Etienne and Toulouse following numerous incidents during Euro 2016.

Bars have also been ordered to close early.

Twenty Russian fans who were deported from France on Saturday will not be able to return for Monday's match in Toulouse.

Coleman has also called on supporters of both teams to make the match one to remember and not for the "mindless minority" to steal the headlines.

What do England need to do?

England go into their final Euro 2016 group game knowing a point in Saint-Etienne will secure their place in the next round.

They could also qualify with a defeat. They can finish no lower than third and their tally of four points might be enough to see them through.

"The important thing is to win the group," England manager Roy Hodgson said. "We want to win to face a third-placed, not a second-placed team."

Victory would book a place in the last 16 but a point or even a defeat might be enough, depending on the result of England's game with Slovakia.

Russia are bottom of the group with one point but have won each of their last three meetings with Wales.

"There are so many different scenarios," Coleman said. "All we know is our fate is in our hands. If we win the game, we're through no matter what."

Who will England pick? 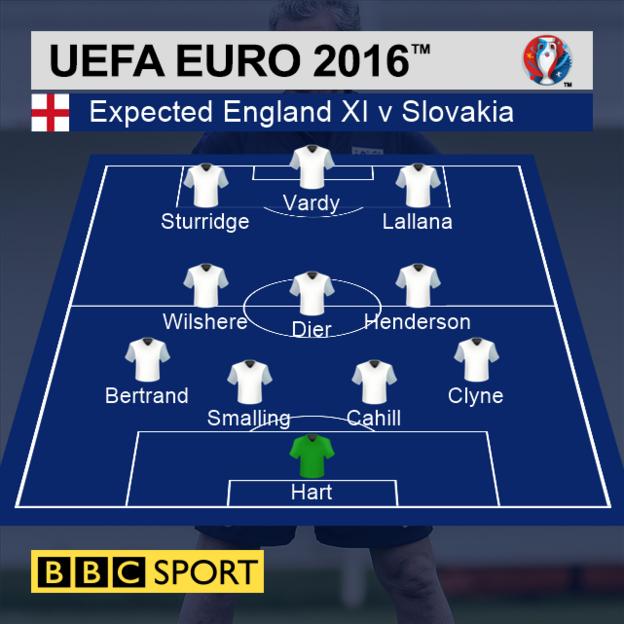 Reports suggest Hodgson will rest six players for the game against Slovakia after the 2-1 win over Wales.

That means Jamie Vardy and Daniel Sturridge, who both scored in the win over Wales, getting their first starts of Euro 2016.

Former England striker Gary Lineker thinks it is a mistake to make such a raft of changes, tweeting: "Personally think rotation is a hindrance. The big stars never miss a game. Consistency key."

But skipper Wayne Rooney said: "Whoever the manager decides to play, we have players who can change games."

Coleman is expected to name the same side who started the defeat by England.

Midfielder Joe Ledley was a doubt after he was substituted in the second half of last Thursday's match with a tight calf, but he has declared himself fit.

Gareth Bale is the key figure again for Wales and has scored in the previous two group games with free-kicks.

"I put a lot of practice in," the 26-year-old Real Madrid forward said.

"Even now after training, I'm there for an extra 10 or 15 minutes hitting balls and doing what I normally do when I'm at Madrid and when I was at Tottenham.

"We look very settled and balanced when we play that way and we have been in control of both games so far," he said.

Murphy thinks England will need to go on the attack because he thinks their opponents will be defensive.

"It will be a case of us trying to open Slovakia up because I cannot see them having a real go," he said. "They do not have enough quality in their side.

Former Wales striker John Hartson says defence is not a problem for the Welsh but says the team needs to be better in possession.

"We created next to nothing against England," he said. "It was backs-against-the-wall stuff."

He also says Aaron Ramsey will be key.

"His enthusiasm is to be really admired, but sometimes I would like him to play in one midfield position rather than try to do everything," Hartson said.