England will play Iceland in Nice on Monday in the last 16 of the knockout stage at Euro 2016.

Group B winners Wales still do not know if they will face Northern Ireland or Turkey.

Northern Ireland, who are guaranteed to progress, could find themselves against hosts and Group A winners France, but must wait to see if any of Belgium, the Republic of Ireland or Sweden finish in one of the best four third-placed spots from Group E.

Iceland's late winner against Austria means they finished as runners-up in Group F, while Portugal's draw against Hungary sees them through to face Group D winners Croatia.

The best four third-placed teams from the six groups progress.

The runners-up spot in Group E, plus two best-placed third spots still remain up for grabs.

BBC Sport helps explain which sides can still go through, why yellow cards could prove crucial and who is in pole position in the 'third-place table'.

Host nation France finished as group winners on seven points. Switzerland, who drew 0-0 with France in their final group game, were second on five points and now play Poland.

Albania beat Romania 1-0 on Sunday, their first win at a major tournament. They now face a wait to find out if they will progress to the last 16 as one of the best third-place sides.

Wales finished top of the group with six points, while England finished second on five points after drawing 0-0 with Slovakia in their final group game.

Wales will play either Turkey or Northern Ireland in the last 16, while England play Iceland, the runners-up of Group F.

Slovakia finished third - and were the first third-placed side to be assured of a place in the last 16. They will face either Germany.

Germany won the group after beating Northern Ireland 1-0 in Paris, while Poland secured second spot with a win over Ukraine.

Northern Ireland's group win over Ukraine meant that their place in the last 16 was confirmed on Tuesday when the Czech Republic failed to beat Turkey.

Michael O'Neill's side will play either Wales or France in the knockout round.

Croatia pulled off a shock 2-1 win over Spain to top Group D and leave the defending champions with a daunting last-16 tie against Italy.

Turkey's 2-0 win over the Czech Republic means that they still have a chance to progress. But they need a Group E team to fail to qualify from third place.

Italy have already sealed their place in the last 16 and are guaranteed group winners, while Belgium, Sweden and the Republic of Ireland will contest second and third places.

The Republic will go through if they win, although Martin O'Neill's team - currently bottom of the table - may have to settle for third place.

Belgium will finish second with a draw against Sweden, who will ensure the runners-up spot themselves with a victory - unless the Republic win as well and, in doing so, also finish with a better goal difference. That is a challenge because Sweden enter the final round of group matches level on points with the Republic, but with a goal difference advantage of two.

There is an outside chance that the Republic and Sweden could finish level for second on points, head-to-head record, goal difference and goals scored if both win. If that happens, fair play records will separate them. Going into the final round of group matches, Sweden have a marginally better fair play record.

Many expected Portugal to top this group - but they finished third, without a win in three games. Hungary went through as group winners.

What happens if teams finish level on points?

The top two teams from each group qualify automatically for the last 16, but how are sides separated if they finish on the same number of points?

The final position of teams will be decided by these criteria, in the following order:

What about that third-placed table?

We know that the top two teams go through, but what happens to those third-placed teams? Remember only four can go through from six.

The following Uefa criteria will be applied, in this order:

Who will the third-placed teams play in the last 16?

Here's a Uefa's graphic to help explain which third-placed teams will face which group winners: 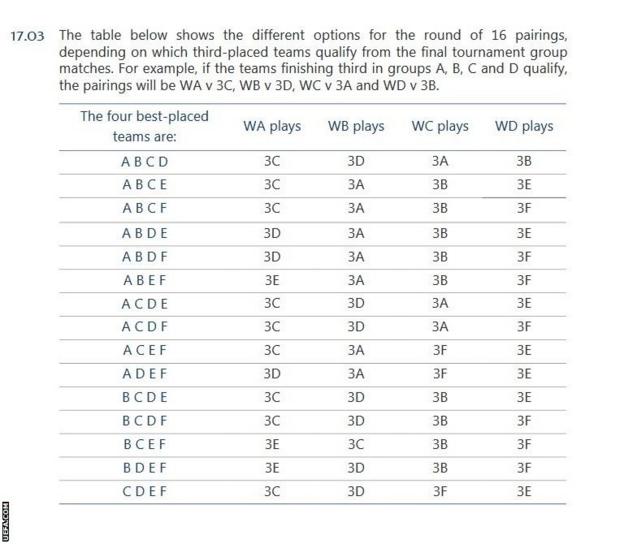