Wales are in the habit of defying expectations, and their final Group B match against Russia will offer them the chance to banish one of their most painful episodes while writing a new chapter in their history.

Qualifying for the European Championship, Wales' first major tournament for 58 years, was an achievement. Now Chris Coleman's side stand on the brink of something greater.

Victory against Russia in Group B would take Wales to the knockout stages of an international competition for only the second time.

A draw would likely be enough, although Coleman and his players say they want to take the initiative - they want to seize the moment.

Russia were authors of a familiar tale of Welsh anguish, beating them in the Euro 2004 play-offs.

Welsh football may be a story littered with failure, but this Wales side are unburdened by their past.

Wales' profound togetherness will be key

Teams often talk about their unity; most onlookers would assume there is a degree of camaraderie to any club or international side.

Yet there is a profound togetherness about this Wales team, bound by circumstances few others have had to confront.

The death of then manager Gary Speed in 2011 left the footballing world reeling and, for what was then a young Welsh squad, the grief was overwhelming.

"We have been through so much and it has made us stronger as a unit," midfielder Aaron Ramsey said before the 2-1 defeat by England on Thursday.

He did not mention Speed by name but his sombre tone spoke of a trauma from which this Welsh squad will never be entirely freed.

The vast majority of the current side played under Speed, whose short tenure rejuvenated Welsh football.

They are a group of friends - like brothers, according to forward Gareth Bale - who have grown together, as people as well as players.

The tragedy which has forged their resolve makes the setback of losing a game seem trivial, so Wales are more than confident of recovering from their defeat against England.

Coleman's side have been relaxed at their training base in Brittany, revelling in the novelty of being at a major tournament and eager to grasp the opportunity.

How will Wales approach the Russia game?

Former Wales striker John Hartson: "We will have more of the ball and we have to be better in possession on Monday, because we created next to nothing against England - it was backs-against-the-wall stuff.

"That is where Aaron Ramsey will be key. I would tell him to focus on that and try to do less elsewhere. He has got great energy but he is all over the pitch.

"His enthusiasm is to be really admired, but sometimes I would like him to play in one midfield position rather than try to do everything.

"We defended really well against England so I wouldn't change anything at the back, but I'd like to see Andy King have a run because he gives us great legs.

"Joe Ledley has given everything and it is a huge call to ask Joe to go again. He has done nothing wrong but Andy has come off a terrific season at Leicester, winning the Premier League title, and he is champing at the bit to play.

"So is Sam Vokes. It might need a bit of freshening up. Maybe forward Hal Robson-Kanu, who battled and gave everything despite being isolated against England, and did everything he was asked to do, needs a bit of a rest too."

Russia again - but a different story

There is a symmetry, and a sense of fate, about the way Wales and Russia meet again.

Wales' 2003 defeat was bitter and controversial. Russia's goal in Cardiff was scored by Vadim Efseev, whose clash with Ryan Giggs in the goalless first leg had given the tie a barbed edge.

It then emerged Russia's Egor Titov had failed a drugs test after the first leg in Moscow, before playing for just under an hour in their 1-0 triumph at the Millennium Stadium.

Wales failed in their attempt to have Russia thrown out of Euro 2004 and, 12 years on, a new generation of Welsh players hope to consign that defeat to history.

Bale and Joe Allen, then 14 and 13, were watching from the Millennium Stadium stands in 2003 and, although they are not weighed down by such tales of anguish, they are keenly aware of their significance.

Russian centre-back Sergei Ignashevich is the only player who remains from the 2003 tie, and his side need a win on Monday to have any hope of reaching the last 16.

This is a team devoid of stars such as Andrei Arshavin and Roman Pavlyuchenko, who helped Russia reach the semi-finals of Euro 2008.

It has been an underwhelming start to the current campaign for Russia, drawing with England and losing against Slovakia.

However, they have been revitalised under manager Leonid Slutsky, known to some as the 'Russian Mourinho' having never played professionally.

His is an interesting story - he suffered a career-ending knee injury aged 19 when he fell out of a tree trying to save a neighbour's cat.

Slutsky and his players are unlikely to dwell on Russia's 2003 victory but, for Wales, this is a chance to bury that heartache and create a moment of history that will be remembered for the right reasons. 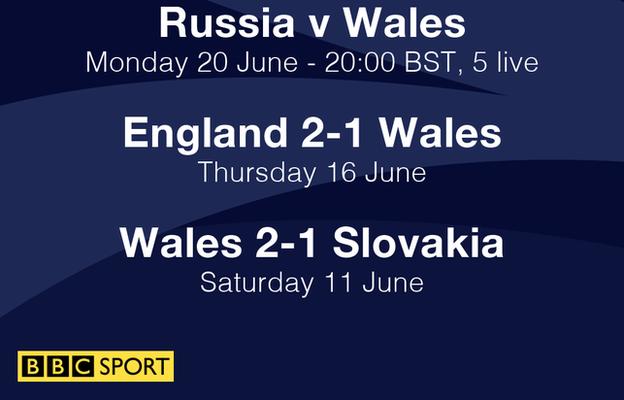