It should have been a night to remember for Cristiano Ronaldo in Paris on Saturday.

The man with one of the biggest egos in world football was celebrating a record-breaking 128th cap for Portugal, surpassing Luis Figo's tally.

But the Euro 2016 match against Austria, which finished 0-0, turned out to be one he will want to forget. Quickly.

"This was one of the greatest goalscorers we have seen having an absolute nightmare," said former England captain Alan Shearer.

Ronaldo, 31, looked happy and relaxed as the match got under way. About 20,000 fans from his homeland were banking on him to score and help Portugal towards a place in the last 16.

He looked certain to do just that with a close-range sidefooted effort in the first half but staggeringly steered the ball wide. It was the first of 10 efforts in the game - all unsuccessful.

The Real Madrid forward spent the rest of the first half drifting across Portugal's front line, looking for support from former Manchester United colleague Nani, but struggled to make a real impact.

By the time Italian referee Nicola Rizzoli blew for half-time, Ronaldo looked so deflated it took him a good minute longer than any other player to trudge off down the tunnel.

Maybe the second half would bring Ronaldo better luck? Maybe not.

There were a couple of mishit free-kicks (taking his tally to 36 direct free-kicks attempted at major tournaments, no goals), the occasional flick and feint, and time and again he implored team-mates to spread the ball wide and send it into the penalty box for him to utilise his heading prowess.

Just when it seemed the script appeared to have taken a twist in his favour as Martin Hinteregger wrestled him to the ground for a penalty, the worst was to come.

The man who sealed the shootout win for Real Madrid against against city rivals Atletico in the Champions League final a few weeks ago could not deliver from the penalty spot.

There were gasps of disbelief from 20,000 Portuguese fans, who had never before seen one of their players miss a spot-kick outside of a shootout at a major tournament. There were almost as many howls of delight from Austria's fans as he sent his effort against the post. It was his fourth missed penalty in his past five attempts for club and country.

"He created a lot of chances and normally he would have scored a hat-trick," said Match of the Day pundit Thierry Henry. "When he was about to take the penalty I didn't fancy him - sometimes you can see when a player is not at it and he wasn't tonight."

Even then, there was another cruel twist when he finally found the net with a superb glancing header but was thwarted by the offside flag - cue more histrionics.

That effort took his tally of shots in the tournament to 20 - 11 more than any other player and more than nine other teams.

"We did everything right but the ball did not go in, once again," said another former Manchester United winger, Nani.

"What can we say? We cannot excuse ourselves with 'the ball won't go in' - we had chances."

The only victory of sorts came at the very end, when the match had finished. A fan sprinted on to the pitch and Ronaldo seemed more than happy to pose for a selfie.

The stewards had tried to stop the invader and Ronaldo was arguably reckless and irresponsible - or very accommodating - despite his miserable evening.

"What he's been doing for 10 years has been relentless - achievement after achievement. He didn't get the rub of the green but he kept going and his head didn't drop."

The Ronaldo roadshow will roll on to a game against Hungary in Lyon on Wednesday, with Portugal's captain desperate to ensure he is not remembered for failing on the biggest of stages. 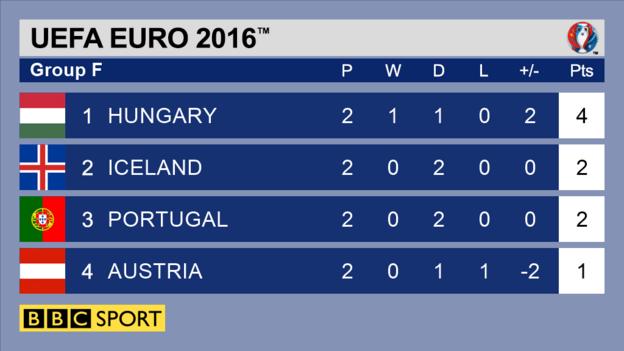