It would be wrong to think England are heading into their final group game against Slovakia without a gameplan at Euro 2016.

When Roy Hodgson threw three strikers on in the second half of Thursday's win over Wales, he was not just hoping for the best.

It was strategic, not a case of telling them to just go and do what you want. I played under Roy for three years at Fulham and he is not like that. He would never do it.

'What England did was clever - and it worked'

I was at the stadium in Lens on Thursday and I was watching exactly what England did, first when Jamie Vardy and Daniel Sturridge came on at half-time, and then when Marcus Rashford was brought on with 17 minutes to go.

The first swap, for Harry Kane and Raheem Sterling, was the obvious one. Vardy went up front where Kane was, Sturridge was on the right and Adam Lallana moved over to the left. The system was the same 4-3-3 we had started with.

It might have looked like chaos when Rashford came on and Sturridge moved centrally but I saw Gary Neville give instructions to Rooney and he went to tell Sturridge to go behind the front two. It was very clever, and it worked.

People might have also have looked at Dele Alli late in that game and thought 'where is he playing?' but when he plays in any formation it can look unbalanced because he is such a flying machine.

When Alli sees a chance to get forward, he just goes. He is always trying to make things happen, like he did with his great touch for Sturridge's winner, but he was also following Roy's instructions.

Against Wales, we effectively ended that game using a midfield diamond - the other system Roy tried in the run up to the tournament.

It was a risk to have so many attack-minded players on the pitch but it worked because we were so dominant, and our full-backs were so high up that we could bring Sturridge inside.

'Roy told me Sturridge is on fire'

Against Slovakia, I imagine Roy will start with a 4-3-3 formation again. We look very settled and balanced when we play that way, and we have been in control of both games so far.

He will approach this game the same way as he has the other two, which is with positivity, a belief we are the better side, and with the aim of dominating possession for long periods again.

It will be a case of us trying to open Slovakia up because I cannot see them having a real go - they do not have enough quality in their side.

I actually spoke to Roy for 20 minutes before the Wales game and it was great to catch up with him.

He was talking about Sturridge being on fire in training and the fact that he can play in that wider role coming in from the right, which he has done for Liverpool and Chelsea and still scored goals from there.

The only danger with playing another totally attack-minded player like Sturridge there is that you lose something defensively. He is not going to be as helpful going the other way.

But Sturridge will definitely start and probably Vardy too. It is a bit harsh on Harry Kane but in tournament football you have got to go with who is sharp and, after his goal against Wales, Vardy will be buzzing.

Lallana is two-footed so he has that lovely luxury of being able to play on the left too, so he can just switch flanks.

His performances in France have been excellent and he definitely deserves to stay in the team - the only thing he is missing so far is a goal.

One of the other things Roy mentioned to me was how good Jack Wilshere has been in training and how sharp he is, which is good to hear.

That's why I think it would be good to give Jack some game-time against Slovakia, because as the tournament goes on he is going to become more and more important to us.

I do not see Wilshere replacing Eric Dier so Alli might make way, although it would not be because of his performances so far in France.

Alli has been non-stop so far and this might be a good time to give him a rest. Roy and his staff will be looking at that sort of data in training and the matches to see if anyone is tiring.

He could also maybe give Nathaniel Clyne a start ahead of Kyle Walker, whose physical output in the last two matches has been nothing short of phenomenal. He is the best right-back I have seen at this tournament.

I know Walker is super-fit and other players have covered more ground but in terms of distance and high-intensity running combined, I do not see anyone else in the team getting near the work he has put in so far. 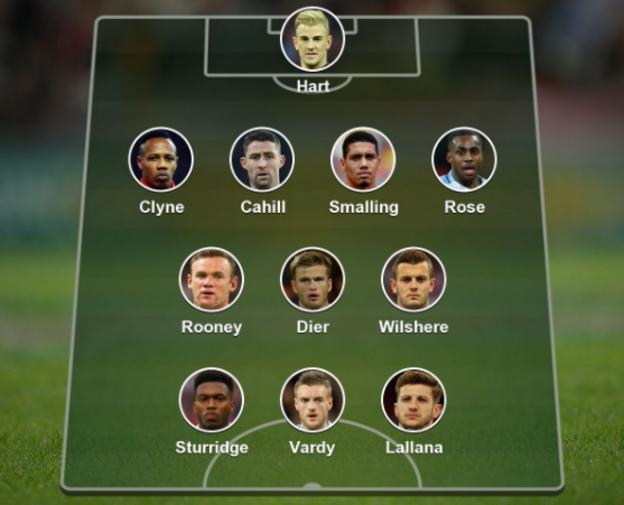 Against Slovakia, it would be ideal to bring in some fresh legs out wide or central midfield, where the physical output has been the highest.

Clyne would not weaken the team but I would be wary of making too many changes because we need to win to make sure of qualifying and topping the group.

'A good performance will give us extra confidence'

Overall, Roy and his staff will be quietly pleased with what they have seen from England in the first two games.

We have been especially good in attack and for all the talk about how vulnerable we are defensively, we have looked as solid as any team that has impressed me so far.

Now we need to go and top it off with a win and, just as importantly, another good performance to give us that extra bit of confidence going into the next round.