Northern Ireland secured a famous first win at the European Championship, beating Ukraine 2-0 to keep their hopes of reaching the last 16 alive.

Manager Michael O'Neill had made five changes from the side beaten by Poland in their opening match on Sunday - but how did his chosen XI fare?

BBC Sport's Lyle Jackson gives his ratings on the men in green from the Stade de Lyon. 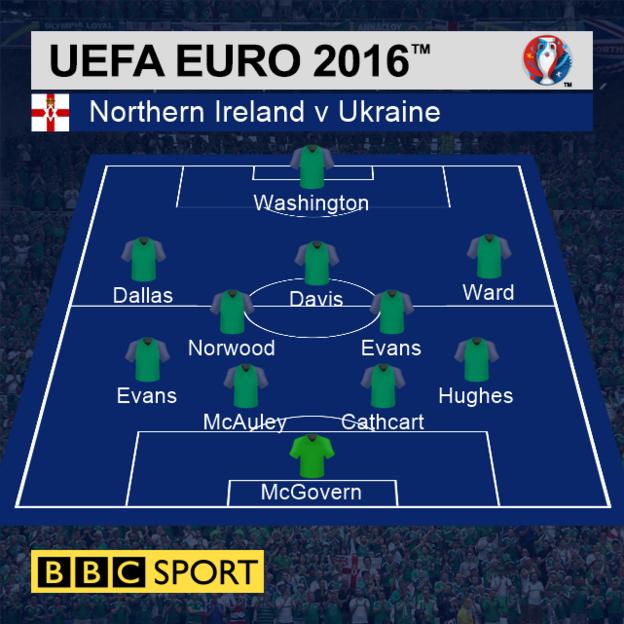 Cannot be faulted really. Got well behind a decent Yaroslav Rakitskiy effort in the first half and pulled off an important late stop as well.

What a fairytale for the 36-year-old former Newcastle and Aston Villa defender. Brought all his experience and international knowhow to the table in an efficient, unfussy manner. Justified his unexpected recall to the starting XI.

Solid as a rock. Got through a mountain of work, helping hold things together at the back as Ukraine pressed for an equaliser in the second half. Went close to scoring in the first half.

The West Bromwich Albion man had already achieved hero status with the green and white army. Another sound defensive display was topped as he scored a brilliant header to give Northern Ireland the lead early in the second half.

Playing on the left of a back four might not be the West Brom man's preference, but he again showed what a class act he is. Made important ball-winning challenges and used possession wisely.

Bravely took a couple of hits for his side and put in an energetic and valuable performance. On this display, deserved to be part of manager O'Neill's reshuffled line-up.

Almost caught napping when dispossessed early on, but it was his perfectly-delivered free-kick which led to McAuley's opener.

As usual, played a captain's part in this superb victory. Gave everything; how he will savour this special moment.

Recalled to the starting team, the Leeds United man was effective in giving Northern Ireland and more positive approach to this match.

The nippy Nottingham Forest winger was a revelation, producing what must be his finest display for Northern Ireland. Really made a nuisance of himself, repeatedly unsettling the Ukraine defence.

Preferred to Kyle Lafferty up front and he didn't let manager O'Neill down with a hardworking, running performance.

Scored Northern Ireland's first goal in the qualifying campaign, he now makes his mark in the history books by scoring the latest goal in a 90-minute match at the Euros - coming in at 95 minutes and 52 seconds.

Came on for the final minutes and played a part in the move which led to McGinn's goal.

A 90th-minute replacement for Corry Evans; not on the field long enough to earn a mark.