Switzerland and France played out a Euro 2016 goalless draw which took the Swiss into the last 16 and saw the French win Group A.

Paul Pogba - recalled by France in one of five changes - was lively and hit the woodwork twice in the first half.

Switzerland could have had a penalty when Bacary Sagna pulled Blerim Dzemaili's shirt in injury time.

France will now play the third-placed team from either Group C, D or E - meaning Northern Ireland and the Republic of Ireland are both potential opponents - in Lyon on Sunday.

The Swiss will face the second-placed team in Group C, who are currently Poland but could be Germany or Northern Ireland, at Saint-Etienne the day before.

With Albania beating Romania 1-0, Switzerland would have progressed even if they had lost at the Stade Pierre-Mauroy in Lille. 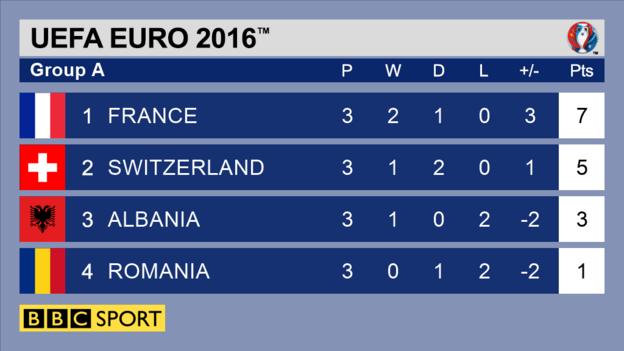 BBC pundit and France legend Thierry Henry put it best when he said his country go into the knockout stages not knowing their best XI.

France coach Didier Deschamps has changed his side in each game, with Pogba and Antoine Griezmann, who had been dropped for the 2-0 win against Albania, starting again after impressing off the bench in that match.

Juventus midfielder Pogba was the first half's outstanding player. He cleared a chance off the line, had a shot tipped onto the bar, forced another save from Yann Sommer and then smashed the ball against the bar with a swerving strike after a bursting run.

However, it was a different story in the second half, with the period only coming to life when Payet - the star of the tournament so far - came off the bench to a huge reception from the crowd.

The West Ham playmaker almost gave France the lead with a stunning volley after Sissoko's excellent run and cross down the right, seeing his effort come back off the bar.

Having scored in the 89th minute against Romania in the opening match and deep in injury time against Albania, he again had a chance for a late strike but his 87th-minute free-kick, which looked goalbound, hit a team-mate in the wall.

Swiss hold their own against the hosts

Switzerland have not beaten France in seven meetings now and rarely looked like ending that run, failing to hit the target with six shots - three were off target and three were blocked.

They could even have topped the group above the hosts had they been awarded a penalty at the end when Sagna appeared to foul Dzemaili.

This is the first time they have qualified for the knockout stages of a European Championship, at the fourth attempt.

It was a strange game where on at least five occasions a Switzerland player's shirt was ripped. Midfielder Granit Xhaka, who joins Arsenal this summer, ended the game on his third jersey.

The ball even burst in the second half when Valon Behrami stood on the ball while tackling Griezmann.

Xhaka has cost Arsenal £35m from Borussia Monchengladbach and, on his displays so far at Euro 2016, he looks a stellar signing.

After two games he had the second most touches and passes in the tournament, behind Toni Kroos.

And he topped the charts for both against France, having 105 touches and making 94 passes, with an 89% completion rate. For comparison, Pogba had the ball most for France with 73 touches, passing it 46 times with 78.3% accuracy.

The view from the managers

France coach Didier Deschamps: "The pitch is annoying. I don't know who is responsible. We are only in the group stage and it is in a state.

"But for a great goalkeeper and a few centimetres, we would have scored goals. You can always criticise but we kept a clean sheet and we finished top of the group.

"Every match is difficult. Apart from Spain, one or two examples, everyone is finding it tough.

"Paul Pogba was the life force of the match in the first half; he was the heart and soul. In the second half he didn't get forward but he has huge potential and I have huge confidence in him."

Switzerland coach Vladimir Petkovic: "It's a significant achievement but the first step forward was this, our minimum objective. We played well, we held firm and now we know we will play on Saturday.

"We need to rest up and now other sides deserve to run and play against us. We're relaxed and we'll be trying to win the game and not just do ourselves credit.

"We were excellent in the first half. In the second half it was tricky with the playing surface and we faded a bit. We kept our heads up, but we must do better in the last third of the pitch.

"It [the pitch] hampered the quality of the game. It does not hold up well and I hope they can fix it, but it was the same for both sides."

The game in numbers

Shots on Target
Home0
Away4