Albania recorded their first major tournament win with victory in Lyon over Romania that gives them hope of reaching the Euro 2016 last 16.

Giovanni de Biasi's team finished their Group A campaign with three points and will now wait to see if they are one of the four best third-placed teams.

FC Zurich's Armando Sadiku scored the only goal of the game when he headed past keeper Ciprian Tatarusanu.

Romania's Florin Andone went close with a shot that came off the bar.

Which of the third-place teams could qualify for the last 16? 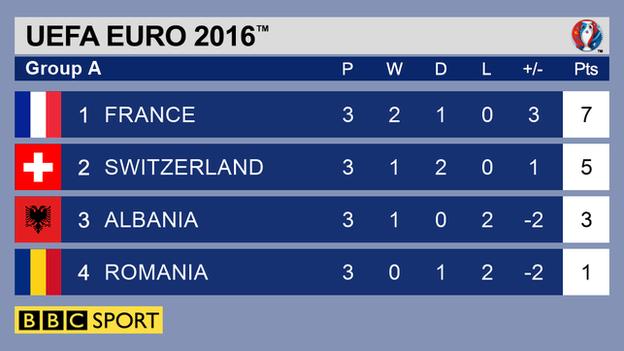 Albania were unfortunate to lose against Switzerland and then France, but the well-drilled and robust outfit finally achieved what they deserved in their first major competition.

Their vibrant and passionate support, who have lit up this tournament, will be proud of the way their side have performed in France, capped off with this brilliant display at the Stade de Lyon.

Sunday's victory was their first over Romania since 1948, and judging by the first 25 minutes it seemed that the barren run would continue.

Romania dominated those opening moments, although Bogdan Stancu's volley was the only effort on target during that period.

Albania, on the other hand, posed a greater threat with the little possession they had. First Ermir Lenjani scooped over from three yards, before Ledian Memushaj fired straight at Tatarusanu after weaving through the defence.

They finally broke the seal just before half-time when striker Sadiku, who worked tirelessly all over the pitch, met Memushaj's cross at the far post and headed past the flapping Romania keeper.

Romania had 62% of possession and managed 16 shots but suffered from a lack of conviction in the final third.

Striker Denis Alibec, who helped FC Astra Giurgiu to the Romanian league title, failed to trouble Albania goalkeeper Etrit Berisha and came off with an injury in the 57th minute.

Genclerbirligi winger Bogdan Stancu, who had scored twice in Group A, only managed a firm first-half volley. The best chance fell to substitute Andone, who was unlucky with a fierce strike that bounced off the woodwork.

Some blame for their defeat must be attributed to 6ft 6in Fiorentina keeper Tatarusanu, whose handling was terrible and who should have dealt with Memushaj's cross that led to the goal.

Albania manager Giovanni de Biasi: "I'm sure we gave huge joy to the Albanian fans. Not just the Albanians in Albania, but Albanians who live around the world.

"Wherever we go, we've found fans who just want to show support and gratitude for what we do.

"Today, we got what we could've got in the first two games - you need to score to get results.

"We contained a team that has quality and strength and conceded just two goals in qualifying. We got there with heart and quality. We played with our heads and mental strength. This is what I'd like us to do in every game."

Romania manager Anghel Iordanescu: "A loss is a loss and we're really sorry for what happened.

"We had many opportunities to score. We started the match well and controlled the game. Because of a mistake in our defence, we conceded a goal.

"In the second half, we tried to impose our style of play and take possession. If we'd scored, perhaps the game would've been different. The Albanian supporters gave energy to the Albania team and that helped them to score."