Daniel Sturridge scored an injury-time winner as England came from behind to beat Wales and secure their first victory at Euro 2016.

Manager Roy Hodgson's side were jeered off at the break and with England's campaign - and arguably his future - on the line, he gambled by introducing Jamie Vardy and Sturridge for the struggling Raheem Sterling and Harry Kane.

The roll of the dice worked as Vardy scrambled in an equaliser from close range after 56 minutes before constant England pressure saw Sturridge work his way into the area and poke past keeper Wayne Hennessey at the near post.

England move top of Group B and need a point against Slovakia on Monday to earn automatic qualification into the last 16, while Wales must beat Russia to guarantee a top-two finish. 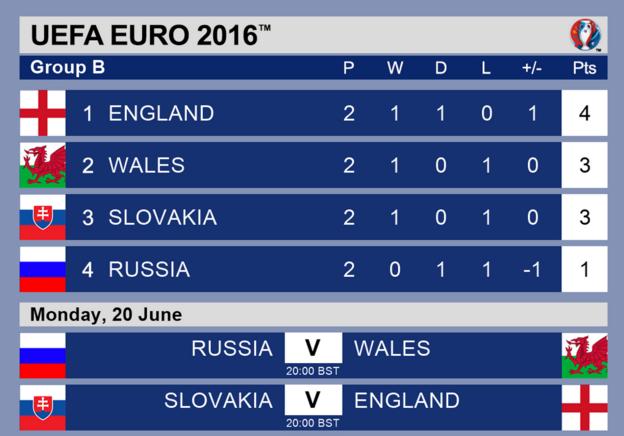 When England left the pitch at half-time accompanied by abuse from their own fans, everything was on the line in this Euro 2016 campaign.

England were facing a humiliating first defeat by Wales since 1984 and the pressure was on Hodgson as his own future would have been in jeopardy if he and his team had made an ignominious exit from France.

He needed to be positive and inspirational, qualities his detractors have accused him of lacking in the past - but here it came off.

Out went Kane and Sterling and on came Sturridge and Vardy. It was all-out attack and the momentum shifted almost instantly as the second half was a tale of almost virtual England domination.

A different script might have been written had Sturridge not produced that late winner, but the bottom line is Hodgson's ploy worked.

It was not scientific - more a question of throwing everything at it and see what happens - but the desired result was achieved and England secured a win from a losing half-time position for the first time at a major tournament.

Hodgson gambled with England's Euro 2016 future and his own. Now he will hope the tournament is ignited for his team.

Wales heartbroken - but still with hope

Wales had spent the week taunting England, light-heartedly at times, about a shortage of desire and passion, but Hodgson's side had the last word as Chris Coleman's players slumped to the turf in agony at the final whistle.

The fightback began instantly as Bale rallied around his desolate colleagues to form a huddle with captain Ashley Williams at the heart of it.

Williams addressed the team passionately and the main message will surely be that they are still right in Euro 2016 and this result, while damaging, is hardly fatal.

If Wales beat Russia in their final game, something they are eminently capable of doing, they will be in the knockout stages, a feat which can be regarded as a success in their first major tournament since 1958. Depending on England's final game, a draw might well suffice.

Wales were second best here, not offering enough attacking options around the world-class talent of Bale, but there is a resilience and unity about this team that serves it well.

They were outstanding defensively until that late twist. Their fate, however, remains in their own hands and this Wales team will not go quietly.

England escaped here - and they deserved the win - but this was not an entirely convincing performance and the first half was a wretched affair.

No wonder goalkeeper Hart ran the length of the field to join in the celebrations after Sturridge's winner because he was responsible for the anxiety that threatened to engulf England.

Is Bale now so deadly from free-kicks that he has a psychological edge even before he hits the ball?

Hart should have stopped Bale's powerful effort from distance, but the ball slipped through his hands as he dived full length to his left.

Hodgson must also decide what to do about Kane and Sterling, two players he defended from criticism after their performances in the draw against Russia.

Kane looks a jaded figure after a long season at Tottenham, while Sterling's confidence almost appears to be draining by the second. He missed an easy chance and felt the frustration of England's fans before he was taken off at half-time.

Hodgson must now surely find a system that incorporates Vardy and Sturridge from the start against Slovakia, presumably at the expense of Kane and Sterling.

For now, however, Hodgson can celebrate a victory that not only leaves England within sight of the last 16, but may well have saved his job.

Man of the match - Wayne Rooney

'I have great empathy for Chris'

England manager Roy Hodgson on his half-time team-talk: "We were doing OK but there were other aspects of our game which we could bring to the game.

"In the second half it was much more aggressive in terms of our attacking play. We were in a hair's breath so many times but it took until the 92nd minute.

"I have great empathy with Chris and the Welsh team because he must have been looking at a good draw. He will be today as I was on Saturday night."

Wales boss Chris Coleman: "A point for us would have been fantastic. Congrats to Roy - he made some good substitutions and we knew they would push us back.

"The guys showed great heart. They stuck into the game and, with 60 seconds remaining, to give up that point we worked so hard for, we are gutted.

"We are here to get through to the last 16. If you are from Wales, you always looked at this game because it is England, but for me it is the middle game of three. We have to show a reaction against Russia."