Manchester United came from behind and survived Chris Smalling's sending-off to beat Crystal Palace and win the FA Cup at Wembley through Jesse Lingard's extra-time strike.

As Wembley was awash with growing speculation this this would be Louis van Gaal's final match as United manager - with BBC Sport understanding he will be replaced by Jose Mourinho next week - he was able to add English football's most glamorous cup to his honours list.

United looked on course to end the season empty-handed as well as missing out on Champions League football when substitute Jason Puncheon's powerful far-post finish put Palace ahead with 12 minutes left.

It was harsh on United, who had hit the woodwork through Marouane Fellaini and Antony Martial, but they responded within four minutes with a brilliant run from Wayne Rooney that ended with Juan Mata scoring from close range.

United lost Smalling to a second yellow card for hauling back Yannick Bolasie in extra time - but Lingard took the trophy to Old Trafford when he lashed home a first-time strike from Damien Delaney's half-clearance after 110 minutes.

All the messages in and around Wembley before and during this FA Cup final pointed to this Wembley showpiece marking the end of Van Gaal's largely undistinguished two-year spell in charge.

When his expected replacement with Mourinho is confirmed, the 64-year-old Dutchman can at least take pleasure and credit for returning United to trophy-winning ways for the first time since the retirement of Sir Alex Ferguson in 2013.

And this was another performance in a manner that has become their FA Cup template this season, driving on through periods of adversity to eventually come out of the other side victorious, something for which Van Gaal deserves praise.

They won at West Ham in a quarter-final replay then survived a comeback from a resurgent Everton to win the semi-final with Antony Martial's late winner.

And here they shrugged off Smalling's red card to show real resilience and character.

It was a victory that clearly meant so much to Van Gaal as the normally impassive manager raced from his seat in the technical area to celebrate Lingard's winner.

In what appears to be his last act as manager, it was one that illustrates he will leave on a high.

This was another day of FA Cup heartbreak for Crystal Palace manager Alan Pardew, whose day will be remembered as much for his rather eccentric dance moves when Puncheon put his side ahead as well as a third final defeat.

Pardew was a member of the Palace side that lost in a replay to United at Wembley in 1990 and was in charge of West Ham when they were hit by Steven Gerrard's famous late equaliser in Cardiff that set the stage for Liverpool to beat the Hammers on penalties after a 3-3 draw.

For four minutes here he must have thought the tide had turned but it was not to be - and the music stopped for the dancing Pardew when Lingard's crisp finish flew past helpless Palace keeper Wayne Hennessey.

Rooney leads from the front

Rooney led Manchester United up the Wembley steps to collect the FA Cup and add a missing medal to his collection - a richly deserved accolade.

The England international may not have been at his best but it was his intervention when United had their backs to the wall and trailed that dragged them back into a cup final they were in danger of losing.

He drifted past four Palace players and took on two more before crossing to the far post, where Fellaini touched on for Mata to score. It was a momentum-shifting moment.

Rooney may have his critics but he proved once again he retains the ability to influence the big games.

Referee Mark Clattenburg was the villain of the piece for Crystal Palaces fans for his poor application of the advantage rule in the first half that stopped a promising position involving Connor Wickham when he was clear after being fouled by Smalling.

Clattenburg pulled play back and infuriated Pardew a second time when Joel Ward carried on in a promising position despite being fouled by Marcos Rojo, only to be stopped in full flow by the official.

There was no doubt about Smalling's dismissal. He had to go for a crude drag back on Bolasie when he was beaten for possession and resorted to rugby methods.

Man of the match - Wayne Rooney

Manchester United manager Louis van Gaal, speaking before BBC Sport broke the news of Mourinho's expected appointment: "It is fantastic to win this title for the club, for the fans, and also for me because I now have won the cup in four countries, and not many managers have done that.

"We had 10 players, and we have played Tuesday evening also, but we have deserved it I think."

Crystal Palace boss Alan Pardew: "My players gave everything. Everything. And they deserved to win but the game is like that.

"We had a couple of decisions that went against us, big time. Connor was through, Wilfried had a penalty but I'm not going to bleat. It was a great performance from both teams, great final." 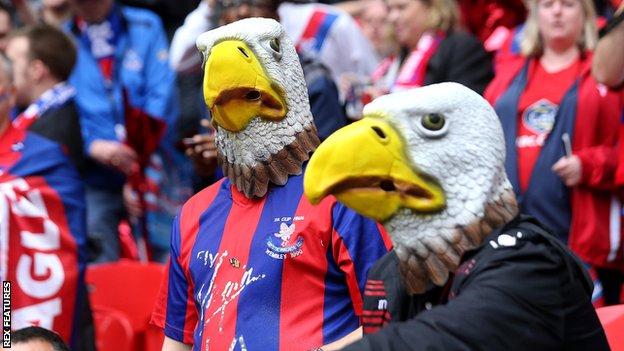 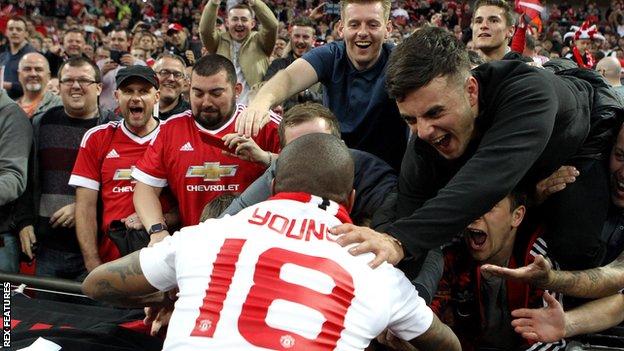 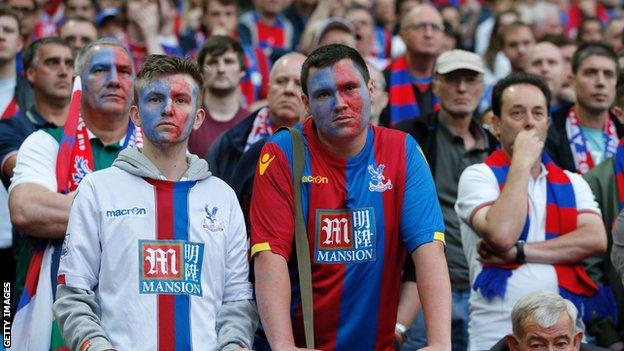 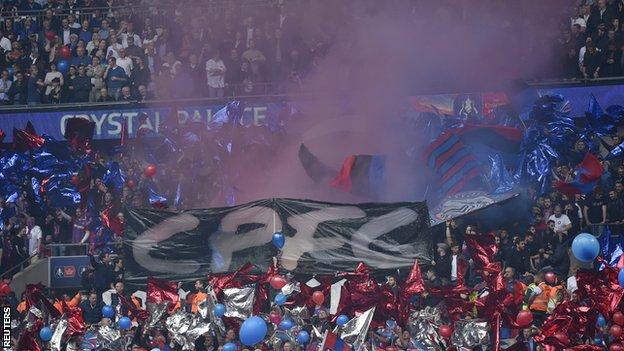