Newcastle United have walked the Premier League's tightrope once too often.

Only 12 months ago they required a last-day victory against West Ham United at St James' Park to avoid relegation.

This time there was no escaping the drop into the Championship, confirmed by Sunderland's victory over Everton on Wednesday.

The long flirtation with the second tier is now a full-blown embrace, proof that survival only lasts so long amid poor management, bad choices and signings that were simply not fit for purpose.

So how has a club such as Newcastle United ended up in such a desperate plight and what does the future hold?

If Mike Ashley is decisive in business, he has paid a heavy price for inertia in football

Manager Rafael Benitez is unanimously accepted as a force for good on Tyneside - the only regret being owner Mike Ashley did not sack Steve McClaren and appoint the Spaniard earlier to give him more time to mount a survival mission.

And the pain of Newcastle's relegation is likely to be exacerbated by uncertainty surrounding Benitez, who has a "break clause" in the three-year deal he signed in early March.

At the time he said: "Some people can see this as special but it's normal. I am trying to stay in the Premier League and if I have a compromise for the future it's because I am convinced we will do well."

Benitez, after losing three of his first four games in charge, led Newcastle on a five-game unbeaten run with victories against Swansea City and Crystal Palace, as well as drawing from 2-0 down at Liverpool, before Saturday's damaging draw at Aston Villa.

It means that, despite relegation, Benitez has done his reputation within the game as an astute strategist no harm and will make his possible availability an attractive prospect for clubs throughout Europe with his pedigree of managing sides such as Liverpool, Inter Milan, Chelsea, Napoli and Real Madrid.

Will Benitez, at 56, want to take the next step of his career in the Championship, attempting to gain promotion from a division he has never experienced, when better offers are likely elsewhere?

Will he see his next step as digging out results at places like Brentford, Burton, Rotherham and Huddersfield?

It is a hard, perhaps impossible, sell for Ashley, who would almost have to offer Benitez the keys to his kingdom to tempt him - and even then with no guarantee of success.

Benitez may believe he can do better than the Championship and the odds must be on him leaving - adding this to the long list of missed opportunities for Newcastle United.

There have been suggestions Benitez has become so hooked on the passion of the Toon Army that he will stay despite relegation, but he is a cold realist not a romantic and he will want solid promises from Ashley before even considering it.

Ashley pays for failing to learn lessons - now will he go?

Ashley's public utterances are rare, but he was moved to speak on the final day of last season before Newcastle got that victory against West Ham to stay up.

He insisted Newcastle were not for sale at "any price" until they won a trophy. This promises to be a very long stay unless relegation changes his mind.

Newcastle put John Carver in place after Alan Pardew departed for Crystal Palace in January 2015 and only just stayed up after he only won three games and lost 12 out of 19.

Survival and Ashley's willingness to spend offered Newcastle a chance to build, but once again poor decision-making holed them below the waterline straightaway.

Instead of ambition, Newcastle's long-suffering fans got the uninspired low-key appointment of McClaren. This was a choice that seemed long in the making, despite McClaren lacking credibility and turning up as damaged goods after failing to take Derby County into the Championship play-offs despite heavy financial backing.

Newcastle managing director Lee Charnley was the man behind McClaren's appointment, described in the usual terms as "the perfect fit". He was far from it, winning only six games and losing 16 out of 28 before he was sacked in March.

Whereas Newcastle just about got away with Carver as a holding operation, Ashley and his colleagues must now know they made a mistake not getting rid of McClaren earlier.

He was clearly a lame duck a month before his departure but was allowed to survive to lose four of his last five games in charge. If Ashley is decisive in business, he has paid a heavy price for inertia in football.

It almost smacked of "it will never happen to us" complacency.

Benitez was available and another month working with those Newcastle players might just have saved the club. He was given 10 games to save Newcastle. Not long enough, even for a man of his experience.

Ashley, it seems, will never rid himself of his reputation as a malign figure at the club, despite spending £80m on eight players since the summer. He bought Sir John Hall's 41.6% stake in the club in May 2007 and took full control later that year but has never forged a bond with the fans.

This is a loveless relationship and perhaps relegation to the Championship - even though it would make a sale of the club much harder and less lucrative - may just persuade Ashley his time is up. 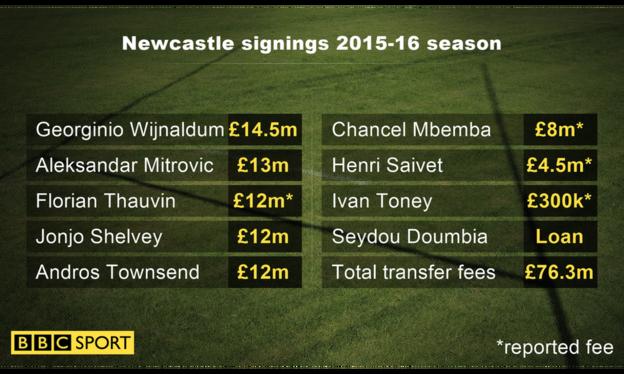 Newcastle's demise has been coming

Newcastle are a giant sporting institution that attract 52,000 fans to its cathedral on the hill, the magnificent St James' Park arena so close to the city with just one club to call its own.

This status cannot shield it from reality, however, and one look at the results and rampant instability that have characterised Newcastle means this demise should not come as a shock.

And what about the manager's chair? Since Graeme Souness was sacked in February 2006 - admittedly before Ashley's arrival - 11 managers have been in charge in one capacity or another.

There is only so much instability a club can take and Newcastle have overdosed on it.

Will there be a clear-out?

The Toon Army squad is heavily built on foreign imports and it will be an alien environment where the right to play must be won, often in the heat of physical battle. Is this the arena they wish to perform in?

Newcastle will be well blessed in goal with Tim Krul on the road to recovery from a knee injury and Rob Elliot and Karl Darlow providing back-up.

But it is surely the end for the likes of 30-year-old Steven Taylor, while Fabricio Coloccini is 34 and troubled by injuries.

It is likely players such as Georginio Wijnaldum, signed from PSV Eindhoven for £14.5m and Chancel Mbemba, an £8.4m capture from Anderlecht, may feel they can look for better than the Championship. Will Aleksandar Mitrovic, the striker bought from Anderlecht for £14.5m feel the same?

Ayoze Perez is a 22-year-old striker of promise who will attract interest, while others who have been around a while such as Papiss Cisse and Moussa Sissoko may not be enamoured by the second tier. Their form has been so patchy they may well form part of a clear-out.

It could be that they will have to get on with it if Newcastle do not conduct a fire sale. If they can keep those players happy then the chances of a quick return may just be improved.

England duo Jonjo Shelvey and Andros Townsend were big-money buys in January for a combined total of £24m. Shelvey has been a mixed bag and will be on a reported £80,000-a-week in the Championship, while Townsend has been a rare success.

He has looked revitalised and may also attract suitors. There have been reports he can leave for £8m in the event of relegation.

There is some promise within the squad but the trick will be to keep them together - easier said than done once the cold reality of life in the lower leagues sets in.

Will Newcastle come straight back up?

Aston Villa's ability to survive in the Championship has been questioned; Newcastle's fiercely loyal fans will expect them to come straight back up to the Premier League.

Newcastle did it once when they returned immediately under Chris Hughton in 2009-10. Can they do it again?

The air must be cleared quickly on Tyneside but one glance around them will deliver the evidence that there is no guarantee of a quick return ticket, as clubs with a history more glorious than Newcastle United's have found.

Leeds United, floored by financial meltdown, were last in the Premier League in 2003-04 and spent three seasons in League One before returning to the Championship, while other hugely successful clubs in the 1970s and 80s have found it tough to come back.

Newcastle, at least, have huge potential and are on a sound financial footing, but Ashley must act quickly to restore faith and optimism or perhaps decide it is a job for someone else.

Benitez's future must be top of the agenda before he or another manager begins addressing the matter of reshaping a squad for the Championship.

Newcastle's relegation is the result of years of poor decisions. They cannot afford any more after this latest devastating setback.