Brighton goalkeeper David Stockdale says the squad must treat their final-day promotion decider at Middlesbrough as "just another game".

Only goal difference separates the Seagulls in third and second-placed Boro in the Championship table.

Albion must win to finish in the top two, while a draw will be good enough for Boro to reach the Premier League.

"You can't get carried away or overwhelmed as you'll start getting tense in the game," he told BBC Sussex.

The 30-year-old added: "We will go there and play our normal game.

"We have to say it is another game and go and get the three points. One more win and we are in the Premier League."

Burnley sealed the first promotion place on Monday following a 1-0 win over QPR, after Brighton drew 1-1 at home to Derby County earlier in the day. 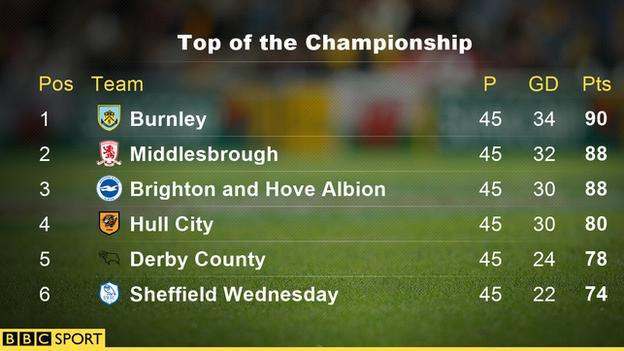 The Seagulls knew four points from their last two games would be enough to reach the top flight for the first time since 1982-83, but needed a late equaliser to secure a point against the Rams after centre-back Lewis Dunk was sent off.

The draw extended Brighton's unbeaten run to 13 games, and full-back Liam Rosenior is remaining positive about their chances of promotion ahead of Saturday's encounter at the Riverside.

"The bigger picture is we are still right in it and we still believe we can do it," the 31-year-old said.

"If you'd said at the start of the season we'd need one win to get to the Premier League we'd have been delighted with that.

"We can't get too down. We dust ourselves down and get ready for what is probably the biggest game of all of our careers.

"We have got to have one of those games where we do everything right. We have had a few of those this season."