Leicester City have won the Premier League title in one of the greatest sporting stories of all time.

Tottenham's 2-2 draw at Chelsea on Monday confirmed a stunning achievement for Claudio Ranieri's side.

Leicester started the campaign as 5,000-1 outsiders for the title after almost being relegated last season.

But they have lost just three league games in what has been described as a "fairytale" and the "most unlikely triumph in the history of team sport".

The Match of the Day presenter had suggested the Leicester players were on the "edge of sporting immortality" last month.

He told BBC Sport: "I can't think of anything that surpasses it in sporting history. It is difficult to put over in words.

"I got emotional. It was hard to breathe. I was a season ticket holder from the age of seven. This is actually impossible."

After Leicester drew 1-1 at Manchester United on Sunday, Tottenham needed to win all three of their remaining league games to catch the Foxes.

But their title hopes were ended when they squandered a 2-0 lead to only draw at London rivals Chelsea.

Match of the Day pundit and former Newcastle United, Blackburn Rovers and England striker Alan Shearer said Leicester's achievement was "the biggest thing ever in football".

Shearer, who won the Premier League in 1995 with underdogs Blackburn, told BBC Sport: "For a team like Leicester to come and take the giants on with their wealth and experience - not only take them on but to beat them - I think it's the biggest thing to happen in football."

The East Midlands club was also quick to hail the achievement of Ranieri and his players, saying they "have captured the imaginations of football fans around the world with one of the most brilliant and unlikely sporting triumphs ever seen".

"In terms of domestic football, Leicester City winning the Premier League is the greatest achievement ever and I think it will never be surpassed," former Leicester midfielder Robbie Savage told BBC Sport.

"It is incredible. This is a turning point in Premier League history."

Leicester East MP Keith Vaz said: "This is the greatest day in the history of this city. It's the top, absolutely the top to win the English Premier League, the best league in the world. It's a miracle and what Claudio Ranieri has done with this amazing team."

Former Foxes manager Martin O'Neill, who led the club to their previous highest Premier League finish of eighth in 2000, said: "Not only is it a brilliant story, but it gives everyone that little bit of hope again that romance has not left football.

"It's been the talk of Europe, there's no question about that. Everything about this season has been remarkable."

Snooker player Mark Selby, a Leicester fan, clinched his second World Championship title a little over 10 minutes after his hometown team won the Premier League crown. "To be Premier League champions is a fantastic achievement and I want to say well done to Claudio and the boys," he said.

Even Prime Minister David Cameron passed on his congratulations, saying it was "an extraordinary, thoroughly deserved, Premier League title".

How have they made history?

It is Leicester's first top-flight title and the club, owned by Thai billionaire businessman Vichai Srivaddhanaprabha, have also qualified for next season's Champions League group stages for the first time.

The Foxes started the season among the favourites for relegation and only the three promoted sides - Watford, Norwich and Bournemouth - were longer odds for the league title.

Ranieri, who took over from the sacked Nigel Pearson in the summer, was seen as an uninspired choice by some fans and pundits after his predecessor had overseen a run of seven wins in nine games as Leicester escaped relegation in 2014-15.

The Italian's previous job ended abruptly when his Greece side lost to European minnows Faroe Islands during Euro 2016 qualifying.

Yet the charismatic 64-year-old's team - assembled for less than £30m and playing pacy, direct, counter-attacking football - has confounded the experts.

Savage added: "I'm speechless, it is unbelievable. I've seen England win the Ashes and get OBEs and MBEs. This Leicester team's achievement is greater than any of that. They should be recognised in the honours list."

Comparison with other sporting shocks

Putting Leicester on the map

Leicester's title triumph is expected to generate millions of pounds in additional income for the local economy with tourism boosted by the club's higher global profile.

Kasabian, the Leicester-born platinum-selling, stadium-filling rock band, will play two gigs at the Foxes' King Power Stadium on 28 and 29 May, saying it will be "the biggest party the city has ever seen". Guitarist Serge Pizzorno said: "It feels like we're almost centre of the universe."

Mayor of Leicester Peter Soulsby has kept celebration plans secret, but said: "Twelve months ago we were re-interring the remains of the last king of England to die in battle [Richard III] and we were worried about our football team.

"We had the eyes of the world upon us and frankly we thought that it could not get any better, or bigger. Well, it has.

"I don't believe in miracles but this is as near as it gets.

"We've had media interest from across the world. We were on the front page of the Wall Street Journal, I've spoken to two German television crews in the last few days, Chilean television and Italian television twice. It really has attracted worldwide attention beyond anything that we fully understood."

Chairman Srivaddhanaprabha bought the club in 2010 for £39m and, after Leicester were promoted from the Championship in 2014, said he would spend £180m to get them into European competition in three years.

According to BBC South Asia correspondent Jonathan Head, the Thai businessman's travel retail group King Power has "hit the jackpot" and can now start to "tap into a bottomless well of passion in this football-mad nation of 68 million people".

A team of bargain buys and cast-offs

Leicester's story is epitomised by 29-year-old striker Jamie Vardy. Released by Sheffield Wednesday at 16 for being too small, he rose through non-league football until Leicester paid Fleetwood Town £1m for him in 2012.

He is now an England international, second in the Premier League's scoring charts this season and was named the Football Writers' Association Footballer of the Year on Monday.

Meanwhile, Professional Footballers' Association Player of the Year Riyad Mahrez, 25, was bought for just £400,000 from French second-tier side Le Havre in January 2014.

Only 14 players have made more than a dozen league appearances - illustrating how settled the side has been - and Ranieri's preferred starting XI cost an estimated £22m, less than a 10th of what is arguably big-spending Manchester City's first-choice line-up.

The games that shaped Leicester's season

Leicester 3-2 Aston Villa, September 2015: The Foxes score three times in the final 18 minutes to move second in the table.

Stoke 2-2 Leicester, September 2015: Another comeback maintains the Foxes' unbeaten start to the season.

Leicester 2-1 Chelsea, December 2015: Defending champions Chelsea are left just a point above the relegation zone as Leicester return to the top of the table.

Tottenham 0-1 Leicester, January 2016: Rivals Spurs are beaten by a late Robert Huth header. Two further FA Cup games between the teams in the same month see Spurs go through after a replay.

Manchester City 1-3 Leicester, February 2016: Nearest rivals Manchester City are comprehensively beaten by another superb away performance. Riyad Mahrez becomes the first player to reach double figures in terms of both goals (14) and assists (10) in the Premier League this season.

Leicester 1-0 Southampton, April 2016: A fifth 1-0 win in their past six games puts Leicester seven points clear of nearest rivals Spurs with only half a dozen games left.

'The biggest sporting upset of all time' - the odds

BBC Sport's chief football writer Phil McNulty was one of hundreds of journalists and pundits to predict a lowly finish and probable relegation for Leicester in his season preview.

At the start of the season, 47 people placed a bet with Ladbrokes for Leicester to win the title at 5,000-1, around half of whom chose to cash out early.

Joe Crilly, from bookmakers William Hill, described Leicester's title win as "the biggest sporting upset of all time", while Ladbrokes' Alex Donohue said it was his company's "biggest payout by a distance".

Crilly added: "It is not just a one-off like Japan beating South Africa in the rugby (which was 200-1), it has been a sustained effort over a full season and one which we, as bookmakers, continued to believe was impossible until just a few weeks ago.

"The Foxes only became odds-on favourites for the first time at the end of March when they moved five points ahead at the top of the table, such was the scepticism with which we viewed Leicester's ability to continue their title push. It is quite simply incredible."

And these are the 10 most discussed Leicester moments of the season on Twitter:

'Jamie Vardy's having a party'

The popular chant from Leicester fans - that striker Vardy "is having a party" - was never more true as the forward held a get-together at his home for team-mates to watch the Tottenham game.

Supporters also gathered outside the star's home, while many more filled the city's bars and pubs, or took to the streets to celebrate the historic moment. 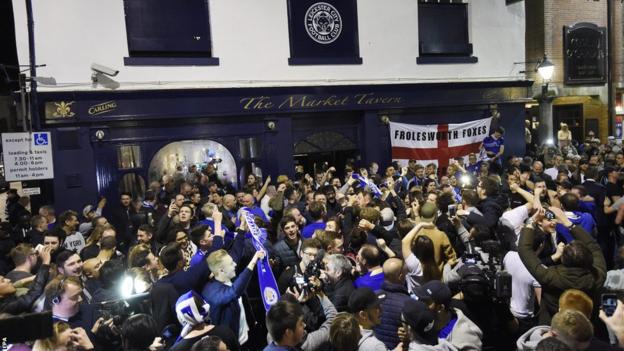 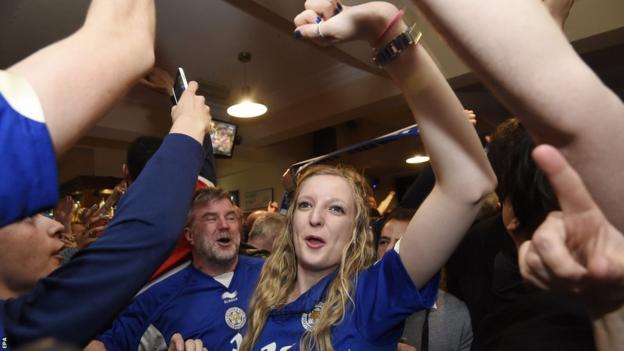 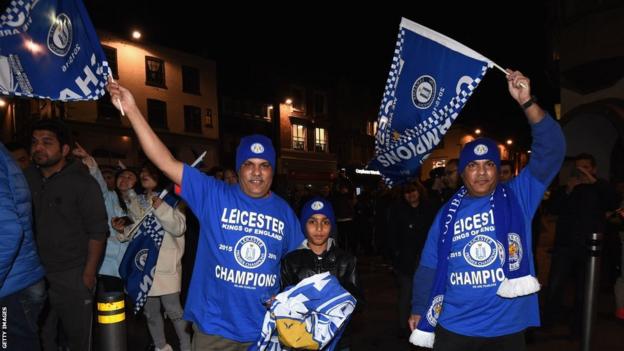 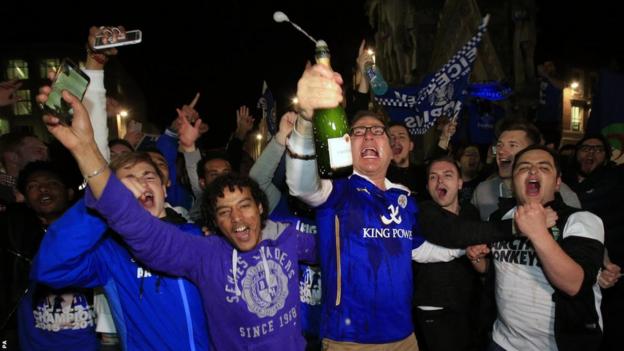 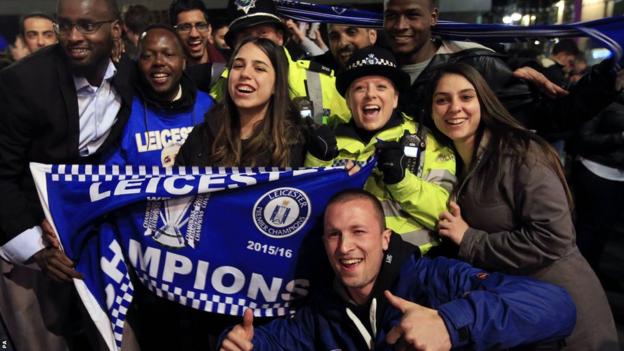