The midfielder headed home Juan Bernat's cross from the left in the first attack of the game.

Bayern, though, failed to build on their advantage as they struggled to break down a well-organised Benfica.

The visitors could have snatched a draw when Jonas' second-half strike was blocked by Javi Martinez.

Bayern, who have reached the semi-finals every year since 2012, will need to improve on an unusually lethargic performance if they are to avoid an upset in next Wednesday's return leg in Portugal. 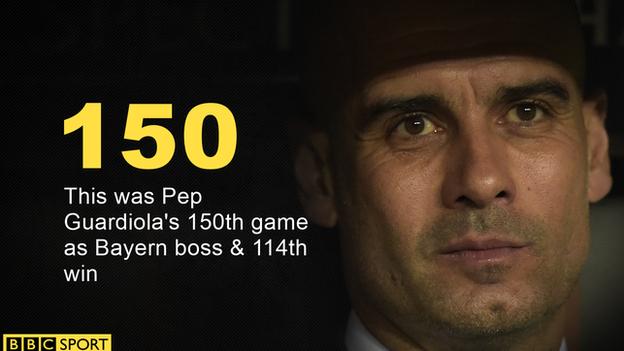 Bayern manager Pep Guardiola suggested before the game that Benfica had the best defence in Europe.

Bayern scoring a goal inside two minutes - when Vidal headed into the bottom corner - suggested Guardiola was generous with his praise, but to Benfica's credit they made things difficult for the hosts for the rest of the game.

Despite Franck Ribery and Douglas Costa's attempts to stretch Benfica, the Portuguese side stood firm and Bayern striker Robert Lewandowski was left with little to no service.

There was a distinct lack of energy to Bayern's play and the home crowd became increasingly frustrated as the game wore on.

When chances did present themselves Bayern were let down by poor decision-making, highlighted in the dying seconds when Lewandowski opted to pass to Ribery when one-on-one against Ederson.

Can Benfica cause an upset in the second leg?

Benfica's defeat was only their second in 21 games and, in Jonas, they possess one of the in-form strikers in Europe.

The Brazilian has scored 32 goals in all competitions this season, but wasted two clear chances to add to that tally on Tuesday.

With Jonas and 21-goal strike partner Kostas Mitroglou in their ranks, Benfica have goals in them and will believe they can triumph at home.

Man of the match - Arturo Vidal

Bayern manager Pep Guardiola: "I'm very happy with the result because I know how good our opponents are. Credit to my team.

"When you get to the Champions League quarter-finals, it's always the second leg that's key. We head to Lisbon with the intention of winning."

Benfica boss Rui Vitoria: "It's all open. Bayern is one of the best teams in the world. But we will give in Lisbon our best.

"We had our problems, but our attitude was right. I'm very happy with our performance."

Bayern, who are five points clear at the top of the Bundesliga, travel to Stuttgart on Saturday, while Acad Coimbra host Benfica in the Portuguese Liga.