British football could be radically changed if the UK votes to leave the European Union, according to experts and leading voices in the game.

Some fear so-called Brexit could lead to more than 400 players losing the right to play in the UK, while others say it may give home talent a chance.

The UK will decide if it wants to stay in the EU in a referendum on 23 June.

"Leaving the EU will have a much bigger effect on football than people think," said football agent Rachel Anderson.

"We're talking about half of the Premier League needing work permits.

"The short-term impact would be huge but you could argue it will help in the long term as it could force clubs to concentrate on home-grown talent."

Some Leave campaigners, such as Brian Monteith of Leave.eu, argue that a post-Brexit UK could lower freedom-of-movement restrictions on the rest of the world which would "broaden the talent pool, not reduce it". 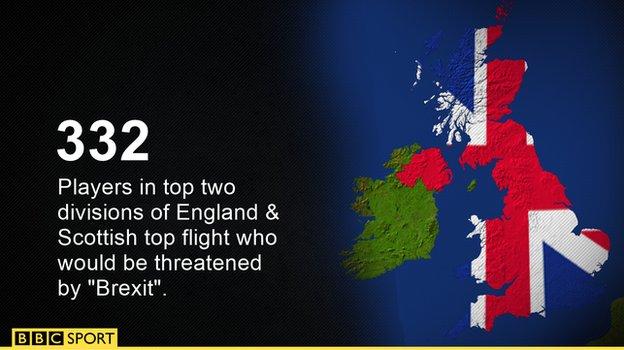 Who is in danger?

Players with an EU passport are currently free to play in the UK. Those without must meet Home Office criteria, the most important being that they are established internationals for leading nations.

Analysis of squads in the first two tiers in England and the Scottish Premiership has revealed a total of 332 players would fail to meet the current standards.

More than 100 Premier League players would be affected with Aston Villa, Newcastle United and Watford facing losing 11 players from their squads, while Championship side Charlton Athletic would need to find 13 replacements.

In fact, only 23 of the 180 non-British EU players currently playing in the Championship would get work permits - and most of those are former internationals from Ireland or Commonwealth nations with British passports.

Remarkably, none of the 53 non-British EU players in the Scottish Premiership would qualify for a permit on the basis of their international career alone.

That is the same situation for 63 non-British EU players in League One and 46 in League Two.

The list of players potentially at risk of losing the right to play in Britain includes two of the undoubted stars of the Premier League season: Leicester City's N'Golo Kante and West Ham's Dimitri Payet, although both played and scored for France this week.

West Ham vice-chairman Karren Brady, the face of the Britain Stronger in Europe campaign, has already written to club bosses throughout the UK warning them a vote to leave would have "devastating consequences".

Premier League boss Richard Scudamore made it clear in a speech to the Institute of Directors last year that his personal view was that Britain should stay in the EU, the world's largest trading bloc.

However, the Premier League's public position is that EU membership is a matter for voters and it always works with "the government of the day".

Privately, the league believes it is almost impossible to know what the situation regarding overseas players would be if the UK votes to leave. It is a stance shared by the Football Association.

The government, for example, could bring in a quota system similar to former Fifa president Sepp Blatter's "six plus five" idea, or it could indeed open the possibility of doing bilateral deals with the likes of Argentina and Brazil to make it easier for their players to work here.

Prior to this season, players without an EU passport were meant to have played in 75% of their national side's competitive games over the past two years.

This only applied to nations ranked in Fifa's top 70. However, appeals were allowed for talented players from lower-ranked sides as well as players who may have missed international call-ups because of injury.

The new rules, brought in after hard lobbying by the FA, were intended to strike a balance between a club's desire to hire the best available and the need for more openings for young British players.

Dr Gregory Ioannidis, a senior law lecturer from Sheffield Hallam University, believes the rules could be relaxed should the UK leave the EU.

If that happened, then he said he did not "envisage any problems for clubs".

However, he added that it may be difficult for such an agreement to be put into place because footballers "are considered workers in law and it may be the case that they cannot be treated as a special category".

Many experts think the work permit rules will be watered down. For example, non-EU countries like Norway and Switzerland have both made concessions to gain access to the single market.

"I would be surprised if those work permit rules were not recalibrated," said Professor Raymond Boyle, from the University of Glasgow.

The sports industry expert added: "Countries such as Switzerland simply make their own rules. My sense is that elite commercial sport will always have the clout to influence rules so that they benefit."

What everybody agrees on, though, is that British football would be in for a period of flux as new rules were decided and clubs rebalanced their squads.

"This could be a positive thing for home-grown players in the longer term," said leading agent Simon Bayliff.

"The downside could be the value of the Premier League decreasing, as its attraction is the collection of foreign stars across many clubs.

"I don't personally believe it will have a huge impact on the biggest names but it could have an effect on the general traffic of non-star international players, which may hurt the league's quality and attractiveness to foreign investors.

"But all this depends on how we Brexit - and that is impossible to predict."