Cruyff, who made his name as a forward with Ajax and Barcelona, was European footballer of the year three times.

He won three consecutive European Cups with Ajax from 1971, coached Barcelona to their first European Cup triumph in 1992 and helped the Dutch reach the 1974 World Cup final, where they lost 2-1 to West Germany.

The Dutch FA said: "Words can hardly be found for this huge loss."

It added that Cruyff was the "greatest Dutch footballer of all time and one of the world's best ever" and wished everyone "a lot of strength in this difficult time".

King Willem-Alexander of the Netherlands said the country had "lost a unique and brilliant sportsman".

He added: "He was a Dutch icon. He belonged to us all."

Holland's friendly against France on Friday will stop after 14 minutes for a minute-long silence in tribute to Cruyff, who wore number 14 as a player.

Barcelona FC expressed their "pain and sorrow" at the news of his death, adding: "We will always love you, Johan. Rest in peace."

Pele, regarded by many as the best footballer of all time, said Cruyff "was a great player and coach" who leaves a "very important legacy".

Bayern Munich's Manchester City-bound manager Pep Guardiola, who played under Cruyff at Barca, said his former manager "painted the chapel and Barcelona coaches since have merely restored or improved it".

David Beckham called Cruyff a "true hero" who was "not just one of the best footballers in the history of the game but also one of the greatest men and nicest person you could meet".

Gary Lineker, an ex-Barcelona player, added: "Football has lost a man who did more to make the beautiful game beautiful than anyone in history."

Cruyff scored 293 goals in 521 appearances for five different clubs - including 204 in 276 games while winning 18 trophies in two spells for Ajax.

He first showcased the 'Cruyff turn' at the 1974 World Cup in a match against Sweden and scored 33 goals in 48 internationals.

With his precision passes, speed, technique and goalscoring ability, Cruyff set new standards as a player.

He helped end an era of dour defensive football, inspiring the Dutch team in their 'Total Football' offensive that took them to the 1974 World Cup final.

Cruyff had double heart bypass surgery in 1991 and gave up smoking immediately after the operation, swapping cigarettes for lollipops.

He even featured in a Catalan health department advert, warning the public: "Football has given me everything in life, tobacco almost took it all away."

Barcelona won four consecutive La Liga titles - 1991 to 1994 - under Cruyff, who remained influential at the club after his sacking in 1995.

Cruyff was diagnosed with lung cancer in October 2015 but in February said he was "2-0 up" against his illness and was "sure I will end up winning".

He "died peacefully in Barcelona, surrounded by his family after a hard-fought battle with cancer", according to a statement on his official website.

BBC football commentator Barry Davies said Cruyff deserved to be in the top three footballers of all time, along with Brazil's Pele and Argentina's Diego Maradona.

"He was so exciting to watch, so full of ideas," Davies told BBC Radio 5 live.

Manchester City and Belgium captain Vincent Kompany called Cruyff "true football royalty", adding: "I don't think anyone has ever influenced the game as much as he has done. Football will miss him, but we will never forget."

Former Germany World Cup winner and manager Jurgen Klinsmann said Cruyff was "an amazing player, coach, teacher and person", while Manchester United and England legend Bobby Charlton said Cruyff was "one of those great, great footballers that made you excited whenever he got the ball".

England boss Roy Hodgson added: "Sometimes the word legend is used a little bit loosely, sometimes even flippantly. But there are one or two greats and one or two legends. Johan Cruyff is one of those." 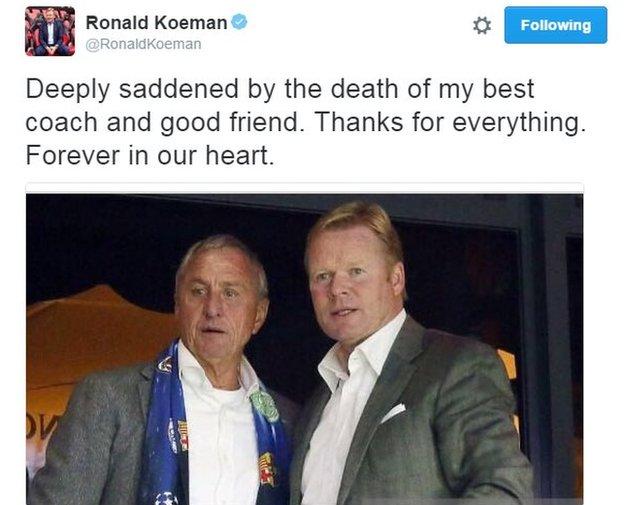 Real Madrid president Florentino Perez said it was "a very sad day for the world of football", adding that he wanted to "transmit on behalf of Real Madrid our condolences and our love to FC Barcelona and most especially his wife and their children."

On football and his philosophy:

The Netherlands play France in Ajax's Amsterdam Arena in a friendly on Friday (19:45 GMT) and face England at Wembley on Tuesday (20:00).

BBC Radio 5 live will broadcast a special programme paying tribute to Cruyff at 19:00 GMT on Thursday, followed by another programme at 21:00 on Friday.

What were your personal memories of Cruyff? Leave your comments below.