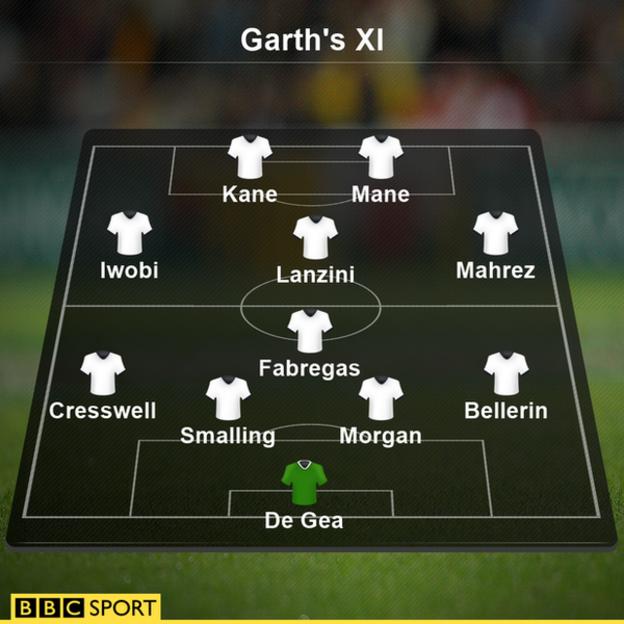 Leicester continued their surge to the Premier League title with victory over Crystal Palace, but Tottenham kept pace after brushing aside Bournemouth.

Local youngster Marcus Rashford settled the Manchester derby with a cool strike for United against City to blow open the chase for fourth place.

Newcastle came from behind to claim a much-needed point against Sunderland in the Tyne-Wear derby and Liverpool capitulated to defeat at Southampton.

But which players made the cut this week?

As far as Manchester derbies go this was a non-event, although you can't blame David de Gea or United for that.

I can't believe a team with such an abundance of talent like Manchester City can look so disinterested in winning a Premier League title. Could it have something to do with the announcement of Pep Guardiola as their next manager and the scant disregard of Manuel Pellegrini by the City board?

However, there is no better sight than De Gea back on top of his game. He only had a handful of saves to make throughout the match but everything he did looked commanding. The Spaniard is playing with an authority that suggests he and his team-mates have the Champions League on their minds again.

What a glorious ball from Bellerin for Alex Iwobi to score his first Premier League goal. What surprised me about this ball is I don't see it often enough from a full-back with so much ability. This was Bellerin's third assist in two league games having managed only two in the previous 46 fixtures.

Meanwhile, what has happened to Everton? Last week against Chelsea they were magnificent and played with a freedom and expression that was a joy to watch. This week all that exuberance seems to have evaporated into thin air.

It took a fully stretched Branislav Ivanovic to stop Cresswell from putting West Ham 2-0 up in a super move between the full-back and Manuel Lanzini. In the second half, it was the crossbar that stood between him and glory with Thibaut Courtois well and truly beaten.

Had West Ham won this game, they would have gone above Manchester City and be sitting pretty in a Champions League spot. However, the way Slaven Bilic has got his team playing at the moment they may still be entertaining European football at the Olympic Stadium next season regardless.

Three games and no goals conceded tells you all you need to know about how well Leicester City have defended as a team recently. In fact, I could have selected any member of the Foxes' back four for my team of the week, such was the quality of their defending against an out-of-form Crystal Palace team.

I have gone for captain Morgan who went to great lengths to heap more pain and misery on Palace manager Alan Pardew, whose winning streak deserted his side weeks ago. Palace now sit fifth from bottom and desperately need points to guarantee their Premier League status.

I don't know how he stayed on the field. Smalling's second-half challenge on Sergio Aguero could have seen the England international taking an early bath - but having ridden his luck, he adjusted his game brilliantly in order to get through this tricky encounter against Manchester City.

If there has been one success story for Louis van Gaal, it has been the development of Smalling. Manchester United's stand-in captain has had an excellent season.

It was Fabregas' ball that caused so much confusion in West Ham's defensive ranks that led to the free-kick - that he scored - in the first place. The moment the ball left Fabregas' foot it was destined for the back of the net.

The Hammers can complain all they want about referee Mark Clattenberg moving the wall back further than the mandatory 10 yards. The extra couple of yards imposed on the West Ham wall would not have made a scrap of difference - such was the quality of Fabregas' free-kick.

It took an excellent save from Wayne Hennessey to stop Mahrez opening his account in the game's early exchanges. However, it was only a matter of time before the Algeria international crashed through Palace's defences and put Leicester on course for the biggest football upset since Nottingham Forest won the title under Brian Clough.

The comparison is a little premature I admit, as Leicester haven't won anything yet under Claudio Ranieri, but Mahrez does have the same flair, speed and thirst for goals as Trevor Francis did in a Forest shirt. That said, I have no intention of putting money on Leicester winning the Champions League anytime soon.

I was at Stamford Bridge for West Ham's game against Chelsea and I was majorly impressed with Lanzini. The little Argentine was sensational and appeared to have an infectious effect on the entire Hammers team.

To be perfectly honest, West Ham were the better side on the day and should have won this game. Manager Bilic made a valid point when he insisted that the penalty awarded to Chelsea was outside the box and should not have been given - and he was right.

Iwobi's week started in the Nou Camp and ended with his full Premier League debut and his first Premier League goal. Not bad for a 19-year-old. The link-up play between himself and Danny Welbeck was fabulous at times and there looks to be the beginning of a wonderful partnership.

What is even more remarkable is that it was only Iwobi's 14th game for Arsenal in all competitions. To be showing that sort of confidence so early in your career speaks volumes for Arsene Wenger and his coaching staff. I think I'm going to keep my eye on this kid. Arsenal may have uncovered another Ian Wright.

Liverpool should have had this game sewn up after 45 minutes. Being 2-0 up away from home should be enough to provide a competent team with at least a point. However, I am delighted that Mane is back among the goals after that appalling sending off at Stoke last week by referee Lee Mason.

Yet it could have gone terribly wrong again for Mane when he missed a penalty before he set Southampton on course for a stunning comeback. The Senegal international was the difference between the two teams and he has left Jurgen Klopp and Liverpool's chances of finishing in a European spot hanging by a thread.

So Spurs have narrowed the gap to five points on Leicester again after some exceptional finishing by Kane. Some of you may remember that I said at the start of the season that I had fears for him with regard to second-season syndrome but I need not have worried. The striker is looking every bit the real deal.

However, I would like to put Roy Hodgson and the England team on notice that Mauricio Pochettino has gone to great lengths to look after every hair on Kane's head in order for Spurs to have a fighting chance of competing for the title this season.

Is it possible that you can return the striker in the same condition and in the same confidence as they gave him to you? It would be greatly appreciated. Thank you.