Sunderland manager Sam Allardyce says he was surprised Rafael Benitez took the Newcastle job, and believes it will be a "massive escape" if both teams avoid relegation this season.

Sunderland travel to St James' Park on Sunday, in Benitez's second game in charge of the Magpies.

The Black Cats are a point ahead of their local rivals, who are 19th in the Premier League.

"He sees Newcastle as a good opportunity," said Allardyce.

"I have to say I was quite surprised, yes, but obviously being a football man, he wanted to get back in."

Former Real Madrid, Chelsea and Liverpool boss Benitez took over at Newcastle on 11 March following the sacking of Steve McClaren, who won just six of his 28 Premier League games in charge.

"From Steve's point of view, I felt sorry for him and of course another English manager bites the dust," added Allardyce.

"There are only three of us left now - there's only me, Alan Pardew and Eddie Howe, so that's a great shame.

"But pitting your wits against some of the best coaches in Europe is always a challenge and Rafa is one of those, I don't think anybody would argue with that."

Allardyce and Benitez have not always seen eye to eye.

The former Bolton boss suggested in his autobiography that Benitez had little to do with Liverpool's 2005 Champions League win, and the Spaniard responded by questioning Allardyce's success.

"Early days, it was a bit ferocious, but the mellowing of Sam Allardyce has happened over the last few years," said the Black Cats boss, who managed Newcastle between 2007 and 2008.

"But it's not about me or Rafa, apart from us doing our jobs behind the scenes. I'm sure there's nothing I can say or do, and there's certainly nothing Rafa can say or do in his press conference that's going to rattle me, that's for sure."

Sunderland go into Sunday's derby two places above Newcastle and both teams have nine games left.

Allardyce said: "It would be a massive escape if both of us did it because it's certainly looking like at the moment, for me, it's probably Swansea or Crystal Palace that we can catch, and they have to lose a lot of their games.

"Their nine games, they are going to have to lose or draw them - if they get a couple more wins, they'll be safe because I still think 38 points will do it this year." 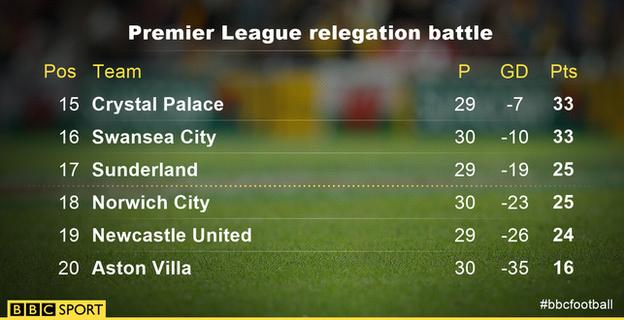