Barcelona's trio have transformed "normal life into art", according to Arsenal manager Arsene Wenger, whose side bowed out of the Champions League as expected after a tough lesson from the Catalan grand masters.

Neymar opened the scoring with a light brushstroke, Luis Suarez then splashed a bit of colour before Lionel Messi revealed his latest piece, entitled 'A Deft Dink Over Ospina'.

They were works of art, so we thought we would pay tribute to them with our own dedicated gallery:

The Opta masterpiece alongside the Pollock shows the passes, touches and areas covered by Messi, Suarez and Neymar in Wednesday's win.

The Barca trio are estimated by transfermarkt.co.uk to be worth 300m euros (£232.5m), which makes Pollock's painting appear rather... cheap.

This painting, translated into English as 'Goals: Galore' shows how many times Messi, Suarez and Neymar have scored this season so far. The total of 106 is exactly the same number of goals that bitter rivals Real Madrid have scored in total in the Spanish league and Champions League combined. 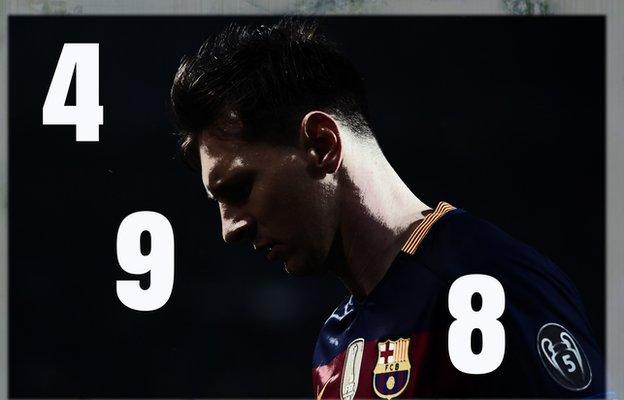 Argentina's finest footballing export since Diego Maradona has now scored 498 career goals for club and country - two away from the magical 500.

Who will Messi score his 500th against? 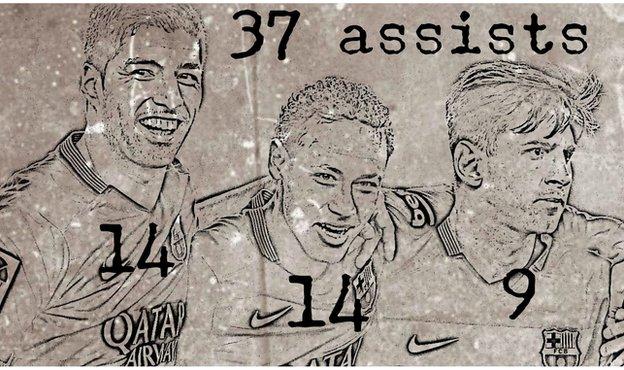 They score goals as a trio, but they also help each other out as a collection. And they're even best friends off the pitch. Life imitates art, as the saying goes.

This piece, entitled 'To Me, To You', shows Suarez (14), Neymar (14) and Messi (9) have assisted each other's goals 37 times this season. Manchester United have scored 37 times in their entire Premier League campaign so far.

This 'Je Scream' is the reaction Wenger probably gave when he realised his side were drawn against Barcelona.

It was also surely the emotion he showed after Messi scored his ninth goal against them - the most by any player against a single opponent in the Champions League.

"We must admire art and they have two or three players who transform normal life into art. I respect that and I believe it is pleasure as well," admitted the Frenchman. "For me, is it suffering."