Sone Aluko's equaliser denied Paul Williams victory in his first game as Nottingham Forest boss, but Hull missed the chance to go second in the table.

The Tigers, who have now won just once in six Championship matches, would have gone above Middlesbrough with victory.

Forest sacked boss Dougie Freedman on Sunday after a run of five defeats in six, but Gary Gardner's 30-yard strike put them ahead at the break.

Hull substitute Aluko rescued a draw, sliding the ball in after a deflection.

The goal came with 17 minutes remaining and lifted a restless home crowd who had seen their side struggle to create chances against an impressive Forest defence.

Although Abel Hernandez hit the post early on, Hull, who drop to fourth, were lifeless in attack and Gardner's sensational strike, after a neat passing move, increased the nerves. 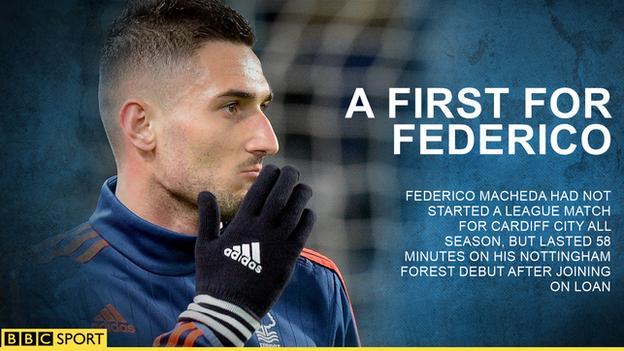 Reds substitute Oliver Burke, who replaced debutant Federico Macheda following his loan move from Cardiff, could have made it 2-0 after a swift counter-attack.

But the hosts rallied, with Aluko making the most of a cruel deflection from Tom Huddlestone's shot to make it 1-1 and Mohamed Diame wasting a great chance for victory when he fired an effort just wide.

"It's really frustrating. We don't deserve to lose the game, that's for sure and they've scored a wonder goal and we've had enough chances to settle us down really.

"There's still 10 games to go or whatever it is. There's a lot of water to go under the bridge but we have to handle the situation at home better than what we're handling it at the moment. Everybody's anxious, which is not a good thing.

"We need to go up to Middlesbrough and get a result and hopefully that can be the case - there is no reason why we can't - and come back for the last five games and produce the sort of performances which has got us in this position because the last two or three weeks has been very frustrating."

"I don't think anyone gave us a chance tonight. Credit to the players that we took the game to Hull, especially early on.

"I asked every player to be themselves and be the best they could. Don't think it's about me and playing for me, just play for yourselves."

"My job is to prepare the team for a spicy local derby [against Derby County on Saturday] and that is what I will do.

"There are so many permutations, players who have played for both teams. The game isn't going to be about me."