Exeter's League Two game with Carlisle United was halted for more than an hour after smoke was seen coming from the back of a stand at St James Park.

The Stagecoach Stand, which houses a mixture of home and away supporters, was evacuated at 15:10 GMT with the cause believed to be a smoke grenade.

Police have made an arrest in connection with the incident, which saw fans evacuated onto the pitch.

The home side were ahead thanks to an early goal from Jayden Stockley when the match was interrupted.

Carlisle levelled after the delay through Charlie Wyke before David Wheeler put City in front late in the second half, only for Luke Joyce to draw Carlisle level five minutes later.

The match eventually finished at 18:02 GMT, more than 70 minutes after it should have ended.

Exeter academy coach Daniel Kelly was among those evacuated and took these pictures of the scene... 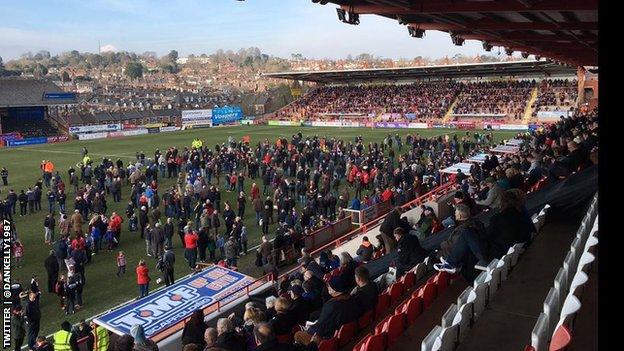 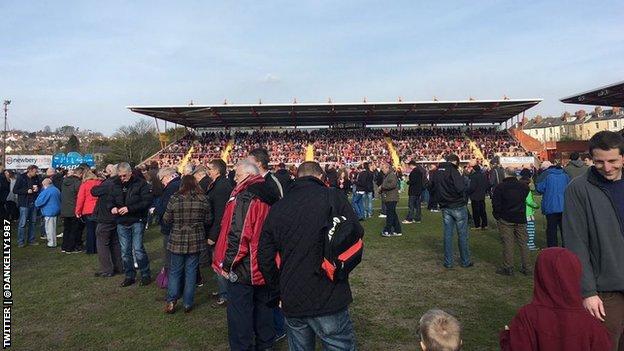 BBC Radio Devon's Exeter City summariser Andrew Barge, who was live on air at the time of the evacuation, told BBC Sport: "All the people in the old grandstand were evacuated just after Exeter had taken an early lead.

"We could hear alarms going off and nobody took any notice of them. A few minutes later, we saw a steward coming over beckoning the players off, and the players came off the field.

"A few moments later, we were told to evacuate the grandstand and that's what we did. The rest of the ground was as it was. No other stands were evacuated."