Not one for fax machines and agents' fees, Slovenian club NK Domzale had a novel way of avoiding the madness of the January transfer window - using LinkedIn.

The online networking service is best known for telling you an old colleague has a better job than yours and is mainly used in the UK by professionals such as lawyers and accountants.

But after Domzale head coach Luka Elsner, 33, posted a message asking for an "offensive right-back" who "must have an EU passport", the top-flight club received 150 applications and signed Spanish defender Alvaro Brachi, 30, just before transfer deadline day.

Jorge Mendes and his fellow agents must be quaking in their loafers.

The advert, posted on 7 January, had got 232 views, 10 likes and eight comments by 2 February and had professional footballers sending in their highlights reels for Elsner to select the best man to fit into his "very offensive 3-4-3 system". 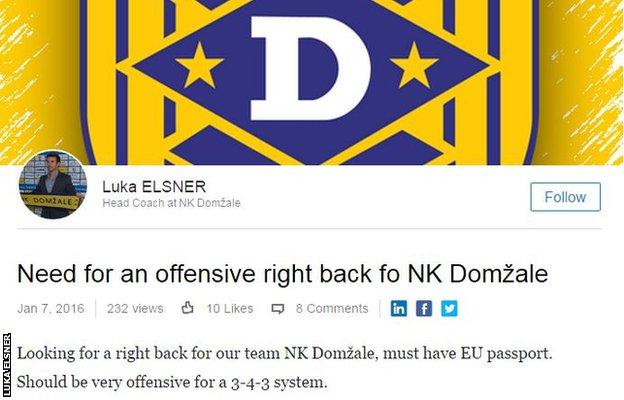 'We needed a cheap way to replace our captain'

NK Domzale are third in the Slovenian PrvaLiga, eight points behind leaders Olimpija while the league takes a winter break.

But they lost captain Nejc Skubic to Turkish side Konyaspor at the start of the January transfer window.

The club's PR officer Grega Krmavnar told BBC Sport: "NK Domzale only has a small budget, we do not have the money to buy the biggest player.

"We needed a replacement and could not find one in Slovenia and had no other choice of players. LinkedIn was just an idea from our head coach Luka Elsner, so we decided it would be a good way, so Elsner decided to post it on the site on his profile."

Brachi's CV includes spells with Spanish sides Real Betis and Espanyol's second teams, Anorthosis in Cyprus and then Videoton in Hungary. He has not played regularly for two seasons.

"We needed a player who was out of contract or wanted a change of environment and we think have found a very quality player.

"I believe we are the first club to find a player in this way."

Some of the unsuccessful responses from LinkedIn