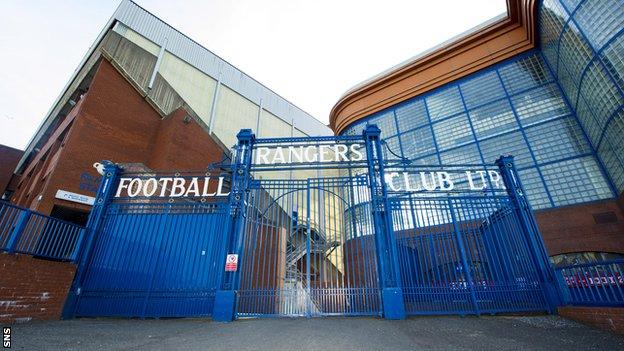 Murray told BBC Scotland that the money has been lodged with the Scottish Championship club's solicitors.

"We think as a board that it's the right thing to do and that's why we're doing it," he said.

The Ibrox director also said that Rangers would spend "whatever is required" to ensure promotion to the top flight.

Murray added: "We said at the AGM that our intention was to repay the £5m loan.

"What I can say factually is that we've deposited £5m with our solicitors - as and when the legal documentation is in place, the loan will be repaid. It's as simple as that."

Rangers have drawn two of their last three league games, allowing second-top Hibernian to move to within three points of Mark Warburton's side.

"A club the standing of Rangers, we want to get back into the top flight of Scottish football - that goes without saying and we just have to regroup and go again," said Murray.

"Sport's all about competition and Hibs have done really well.

"We've done really well and it's been a great first half to the season.

"The game against Hibs is sold out a week on Monday.

"That is going to be the biggest game in Britain that weekend, which is fantastic. That must be good for Scottish football."

Hibs manager Alan Stubbs has revealed he will sign a striker and defender during January and Murray revealed that Rangers are also prepared to strengthen during the transfer window.

"Our priority is to get promotion and we're confident of doing that," he said.

"We don't want to waste money and people would criticise us for doing that.

"Equally, promotion is the absolute focus. If we think we have to strengthen the squad then we'll do that.

"The January window is not the easiest window to find players as the good teams who are challenging for things want to keep their best players and teams in relegation trouble want to do the same thing.

"If Mark Warburton wants to strengthen the team then we'll have to look at that."