On the evidence of their performance against Arsenal, and from what I have seen in their previous 15 Premier League games this season, I cannot see Aston Villa staying up.

Villa are lacking in quality and are also lacking in confidence, as any team would be in their position. It is looking pretty bleak for them.

They have not won since the opening day of the season, are six points off second-bottom Sunderland and eight points adrift of safety.

By the time the January transfer window opens, they might be as good as relegated.

Rather than looking to bring in players then to try to keep them up, their manager Remi Garde might have to start planning for the Championship instead.

Not once during their defeat by the Gunners on Sunday did I think Villa would get anything out of that game.

Remi Garde's side made it much easier for Arsenal than it should have been because they never really asked any questions of the Gunners' back four.

Rudy Gestede was leading Villa's attack but offered very little in terms of movement and did not attempt to get behind the Arsenal defence - Scott Sinclair was the only player trying to do that. 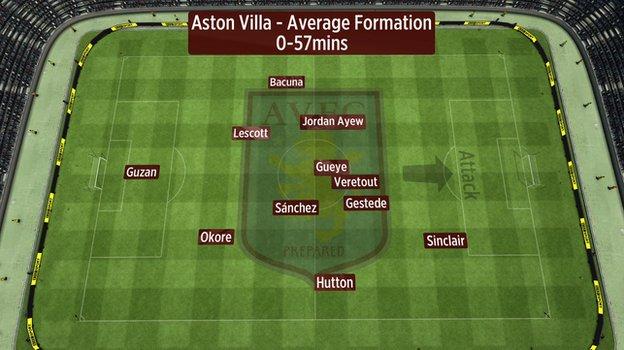 Villa offered more of a threat in the second half but by then they were 2-0 down and the game was already gone.

I don't know whether their improvement in attack was down to them having more of a go, or Arsenal taking their foot off the gas after a big week in the Champions League. I suspect it was the latter.

Even when Villa did create chances, they rarely troubled Petr Cech. Only two of their 18 shots were on target.

Villa spent almost £50m on 13 players in the summer, using the money they got for Christian Benteke and Fabian Delph.

But when I look through the list of their signings, there is hardly any experience there, let alone experience of the Premier League.

That is a lot of money on mostly unproven players, and it is asking for trouble.

Villa have a similar problem to the one Newcastle have had this season - they have bought players who have done well in French football, but that is a completely different ask to what you need in the Premier League.

Yes you need youth, but you also need nous to go with it. Villa do not have enough of that in their team.

I don't know who has the final say on Villa's transfers but they have a head of recruitment and a sporting director at the club and it cannot just be the manager's fault.

My old Blackburn team-mate Tim Sherwood was sacked at the end of October but was in charge at the time those players were brought in.

I know Tim well, and I know he knows what the Premier League is all about - not all 13 of those players were his buys. (This paragraph was amended after publication to clarify Shearer was not saying all 13 signings were made without Sherwood's approval).

So, as well as looking at how badly Villa are struggling on the pitch, you also need to look at who is signing their players in the first place.

They have spent £50m and I would ask them what return are they getting on that? I cannot see much of one myself.

Who will want to join Villa now?

Garde said this week that he wants to bring in some experience in January, and clearly he will be trying to sign better players too.

But his problem, if Villa are still so far adrift, will be who can he get?

For starters, I can't imagine many players wanting to go there with relegation looking almost certain.

That is not a nice situation to be in, but it looks like it will be the case.