Harry Kane scored on his 100th Tottenham appearance as they moved into the Premier League top four with victory at struggling Southampton.

Kane broke through the Saints defensive line and finished coolly for a 10th goal in his past 10 games.

Soon after, Dele Alli benefitted from some lax defending to score from close range and put Spurs firmly in control.

Spurs managed the game superbly in the second half against a Saints side who are now without a win in six matches.

It represents a shocking start to what Southampton manager Ronald Koeman had described as a crucial two weeks for his team, who remain seven points clear of the relegation zone but in need of an upturn in form to avoid slipping closer to danger.

In contrast, Tottenham gave the perfect riposte to last weekend's surprise defeat at home to Newcastle with a professional performance to take them to 29 points from 17 league games.

Kane caps his century with a goal

For much of the first half, it was an even encounter between the sides, but Tottenham seized a control they would not relinquish with two goals in the space of three minutes just before half-time.

In Kane, they had the one quality striker on the pitch and he proved his class with a superb show of strength, skill and composure to give them the lead.

Erik Lamela broke on the halfway line and found Alli, who managed to move the ball on to Kane shortly before being taken out by a wild challenge from Jose Fonte.

Kane did the rest, darting between two home players before poking the ball past Virgil van Dijk, running in on goal and finishing neatly past Southampton keeper Paulo Gazzaniga for the 47th goal of his Spurs career.

Clearly shaken, Southampton gifted the visitors a second as the excellent Alli went from provider to scorer, finishing unchallenged at the back post after Kyle Walker's low cross made its way through a host of static defenders.

During their poor recent run, Koeman has complained that his side's biggest problem has been a failure to convert the numerous chances they have created.

This was certainly the case in the opening 20 minutes on Saturday as Sadio Mane spurned a number of good opportunities.

The best two saw the forward's angled drive blocked by the boot of former Saints defender Toby Alderweireld, before Hugo Lloris saved his first-time shot from the edge of the area.

Having conceded twice before the break, Southampton failed to recover as Tottenham withheld their limp and increasingly desperate forays forward with ease.

They only seriously threatened in added time when Lloris produced a superb low save to palm away a shot from substitute James Ward-Prowse, but by then it was a case of much too little, way too late.

A triumph for Pochettino's method 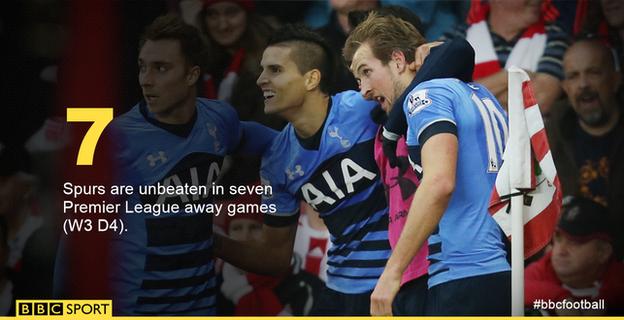 Spurs manager Mauricio Pochettino left Southampton to take over at Spurs in May 2014, following 18 months in which he helped sculpt Saints into an effective Premier League outfit.

It has taken time for the Argentine's preferred high-energy pressing game to bed in at White Hart Lane but, with the addition of the likes of Alli in midfield, Alderweireld in defence and significant contributions from Lloris and Kane at either end, they are reaping the rewards.

Prior to Saturday, they had given away more points - 11 - from winning positions than any other Premier League club this season, including three last Sunday against Newcastle, which can be an unfortunate by-product of such an attacking style.

However, Tottenham ensured they did not add to this unwanted stat with a pragmatic and intelligent display in the second half to see the game out, playing largely in the Saints half to earn a deserved and impressive win.

Man of the match - Dele Alli

Southampton manager Ronald Koeman: "If you analyse the game and watch the first goal, I am very worried because the defending was at amateur level and not the level you need to win this kind of game. It was so naive.

"One of my criticisms this season is that we are too nice people. Until the first goal, Southampton was the better team but they showed us what is a 'killing mentality'. They won the battles and second balls and were more clever in one-on-one situations.

"It might also be about confidence, but we need to be more clinical. If you get three or four good chances, you have to score. We maybe need to change players because they are not responding to our strategy."

Tottenham manager Mauricio Pochettino: "I am very happy because it was a very difficult game. Southampton are a very good team and the first 20 minutes were difficult but after that we settled and managed the game and deserved our victory.

"I am pleased with the victory after a difficult week and after our defeat by Newcastle.

"The table is not the important thing at the moment. We need to keep working hard because the Premier League is very tough."

Southampton are at home again in a week's time, on Boxing Day, when they face Tottenham's north-London rivals Arsenal at St Mary's.

Tottenham's 26 December fixture is against Norwich, who beat Manchester United at Old Trafford on Saturday.