Real Madrid players dominate the Champions League team of the week after a record-equalling 8-0 win over Malmo.

Cristiano Ronaldo and Karim Benzema both scored hat-tricks and line up in attack, along with team-mate Isco. Danilo's impressive display earns him a place in defence.

Two Premier League players feature as Manchester City's Raheem Sterling is included after his two goals against Borussia Monchengladbach. Laurent Koscielny is included after helping Arsenal progress to the last 16 with a superb 3-0 win at Olympiakos. 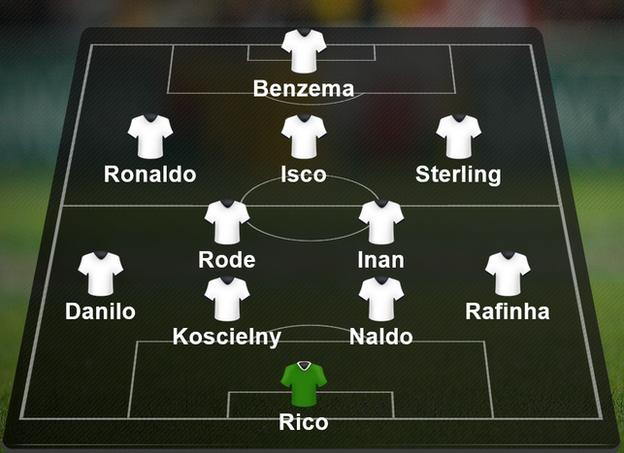 The Champions League Team of the Week is supplied by Opta and is based on more than 250 calculations.

Sergio Rico showed maturity beyond his 22 years as he kept Juventus at bay in their final group match. As the Italian giants pressed in the second half, Rico was a constant problem, making crucial saves from Paul Pogba and Alvaro Morata in injury time to help seal a 1-0 win.

Real Madrid equalled the biggest win in the Champions League by beating Malmo 8-0 on Tuesday, and Danilo played a key role in such a comprehensive victory. He was an assured presence at the back and played his part in Real's fourth when Cristiano Ronaldo struck after the defender's initial shot was blocked.

Naldo had not scored in the Champions League for nine years before becoming Manchester United's chief tormentor on Tuesday. The defender opened the scoring for Wolfsburg before his late winner cut short some brief celebrations from Louis van Gaal's side, having come soon after their equaliser.

Arsenal needed to win by two clear goals against Olympiakos to reach the last 16. Striker Olivier Giroud did what was required of him in attack by scoring a hat-trick, but Laurent Koscielny prevented any nervy moments with a resolute defensive display and helped Arsenal keep a clean sheet on their way to a first win in Greece since 1998.

Bayern Munich kept three clean sheets in the four Champions League group games that Rafinha played in. He made a crucial challenge to prevent Dinamo Zagreb from scoring as Bayern Munich won their final group game 2-0.

As well as helping Bayern Munich keep a clean sheet, Sebastian Rode played his part in the German side's attack by setting up Robert Lewandowski to score his and Bayern's second.

The Galatasaray captain produced a moment of magic in the 1-1 draw with Astana, spinning in possession to open up the defence before scoring his side's equaliser.

Cristiano Ronaldo scored four of Real Madrid's eight goals, taking his tally in the group stage to 11 and becoming the first player in Champions League history to reach double figures.

Raheem Sterling's two late goals turned Manchester City's game against Borussia Monchengladbach on its head as they won 4-2 to finish top of their group. Sterling has now scored 11 goals in 20 appearances for Manuel Pellegrini's side.

Isco set up Cristiano Ronaldo for one of his four goals against Malmo and was often at the heart of Real Madrid's best attacks.

Karim Benzema is enjoying some of the best form of his Real Madrid career and he was a constant menace against Malmo, scoring a hat-trick and generally causing the Swedish side plenty of problems throughout.